Every chance they get, conservatives (more properly called “regressives”) blame public schools for the poor educational outcomes of students in poor neighborhoods. They also point to the supposed low performance of American students compared to students of other countries. For a while I’ve been wondering how American’s K-12 schools would rank against schools in other countries if we adjusted for the large lower class in the U.S. Does poverty explain most or all of the poor performance of American students? I found my answer in this article by the Economic Policy Institute, What do international tests really show about U.S. student performance? In summary:

In short, we can blame poverty, not public schools, for most of the problems with American education.

The correlation between poverty and test scores is evident in this graph from Duke University’s Education and Poverty: Confronting the Evidence: 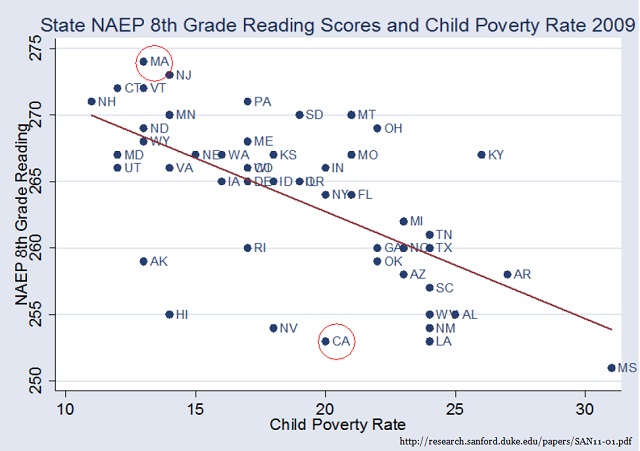 A comparison of children from homes below and above the poverty line found that even among 2-year-olds, children from poor households do worse on average in language skills such as listening comprehension, letter recognition and expressive vocabulary. Poor children tend to score lower on standardized achievement tests such as the National Assessment of Educational Progress (NAEP), and to have lower scores on the critical reading section of the Scholastic Aptitude Test (SAT). These inequalities persist through the college years: looking at children born between 1979 and 1982, more than half (54 percent) of those from families in the highest income quartile graduated from college, versus only 9 percent from the lowest income quartile.

Nevertheless, as the article by the Economic Policy Institute says,

The same conclusion appears in the Time article Why Are the Rich So Interested in Public-School Reform? by Judith Warner:

Striking a serious blow to the contention that it’s bad teaching — not bad luck in life — that makes some American students perform much worse than others (and all of them much worse than students in other countries), Ravitch noted that on a recent international test, the Program for International Student Assessment, “American schools in which fewer than 10% of the students were poor outperformed the schools of Finland, Japan and Korea. Even when as many as 25% of the students were poor, American schools performed as well as the top-scoring nations. As the proportion of poor students rises, the scores of U.S. schools drop.”

David Sirota, in Teachers Were Never The Problem, writes, “Social science research over the last few decades has shown that two thirds of student achievement is a product of out-of-school factors – and among the most powerful of those is economic status.”

The real reason conservatives attack public education isn’t too hard to fathom: they want to privatize education, so they can reap profits for corporations at the expense of the taxpayer, much as they benefit from defense spending and from government-mandated private insurance. The Nov 19, 2012 edition of Forbes has a cover story: “The $1 Trillion Opportunity: No field operates more inefficiently than education. A new breed of disruptors is finally going to fix it. Here’s how to join them.”

How Poverty Affects Behavior and Academic Performance “A childhood spent in poverty often sets the stage for a lifetime of setbacks.”

Class Matters. Why Won’t We Admit It?: The Unaddressed Link between Poverty and Education

The Myth of the Culture of Poverty

PISA: It’s Still ‘Poverty Not Stupid’ shows a strong correlation between poverty and test scores. If you omit test scores for poor US districts from international comparisons, the US compares quite well internationally.

According to http://stophandshaking.com/ 80% of all infections are transmitted by hands. According to the CDC scientists estimate that people who are not washing their hands often or well enough are spreading germs. Harmful germs can live on almost everything from doorknobs to animals to food. See too Fear of Germs Threatening the Handshake. So, shouldn’t […]

Deliver petittions to Dave Reichert this Thursday, May 23 in Issaquah

Recently, western Washington (the genuine one here in the Pacific Northwest, not that other Washington back east where it seems to be the “trick” side of Halloween every doggone day) muddled through a long period of dense fog. Unusual for this time of year in this neck of the woods, where autumn generally finds us […]

One Reply to “Why we can blame poverty, not public schools”