Suppose you are being held hostage by deranged criminals who give you an ultimatum: tell them your bank pin number, social security number and other identifying information, or they’ll rape your wife and daughters and mutilate you.

As a matter of principle, you oppose giving away your money to criminals — a clear evil. But you realize that the alternative is worse. So you settle for the lesser-of-two-evils.

Here’s another example. Suppose you’re terminally ill and in constant pain. You can’t walk, enjoy food, or enjoy sex. Your doctors tell you that your condition will worsen. In such a case, ending your own life might be the lesser-of-two-evils.

Here’s a more whimsical example: you’re a young man “in love” with a woman who insists that you marry. You kinda think marriage is evil, but the alternative — being alone — is worse. You settle for the lesser-of-two-evils, marriage.

Now for a serious, political example. Suppose that you lived in Louisiana in 1991 and had to choose between virulent racist David Duke and flawed, corrupt corporate Democrat Edwin Edwards in the race for the governor. Not a pleasant choice. But, as did a broad coalition of Louisianans, you could, with a clear conscience, vote for the lesser-of-two-evils, Edwards. That example is from Alfred Reed, Jr’s convincing article Vote for the Lying Neloiberal War Monger: It’s Important.

Quoting from that Reeds article again:

I assume readers get the allegorical point of that story [about Louisiana]. Just to drive it home, here’s another, more dramatic one that Harold Meyerson adduced last month in The American Prospect: in the early 1930s, as the National Socialists gained strength, Ernst Thälmann, the Chairman of the German Communist Party held to the line that the Social Democrats were a greater threat to the working class and to the possibility of revolution than were the Nazis. The Communists’ conflict with the Social Democrats was both not without justification and mutual. Some Communists believed that the elements of the working class who were drawn to the Nazis, e.g., those in Ernst Röhm’s Brown Shirts, could be won from them. In 1931 some sought to collaborate with the Nazis to bring down the weak Social Democrat government. In expressing the conviction that the Social Democrats were the main danger in German politics, Thälmann uttered the quip that has long outlived him as a cautionary device: “After Hitler, our turn.” His point was that a Nazi victory would expose them as fraudulent with no program for the working class. What Thälmann didn’t count on was their success at criminalizing and liquidating all opposition. He died in a concentration camp.

Indeed, many leftists who hate the Democrats often say similar things about the Democratic Party: they’re as corrupt as the Republicans.  Or they even claim that the Democrats are more dangerous, because they are wolves in sheep’s clothing. I hear such claims all the time online, particularly on OpEdNews. (I expect comments to that effect on this article.) Proponents of such claims say that the Democrats are as bad as the Republicans because  — take your pick — Bill Clinton approved NAFTA, Bill Clinton overturned Glass-Steagall, Barack Obama prosecuted whistle blowers, Barack Obama supported drone wars, Barack Obama continued the Bush bailouts of Wall Street, Hillary Clinton was hawkish, etc., etc.

I am convinced those people are wrong.  Yes, those Democrats pursued some evil policies. But the Democrats are much better than the Republicans: on women’s rights, on the environment, on taxation, on gay rights, on unionism, on education, on the Supreme Court, on civil rights, on voting rights, etc., etc. Anyone who thinks otherwise is a right wing troll or is deluded.

Gore was an environmentalist and a moderate Democrat. Bush and Cheney launched the immoral and disastrous war in Iraq; they transferred trillions to the rich and gutted environmental regulations.

Obama did many bad things, but he’s nowhere near as bad as Bush, Cheney, or Trump. I needn’t tell you how much damage Trump and the GOP Congress are doing now.

So, in response to: 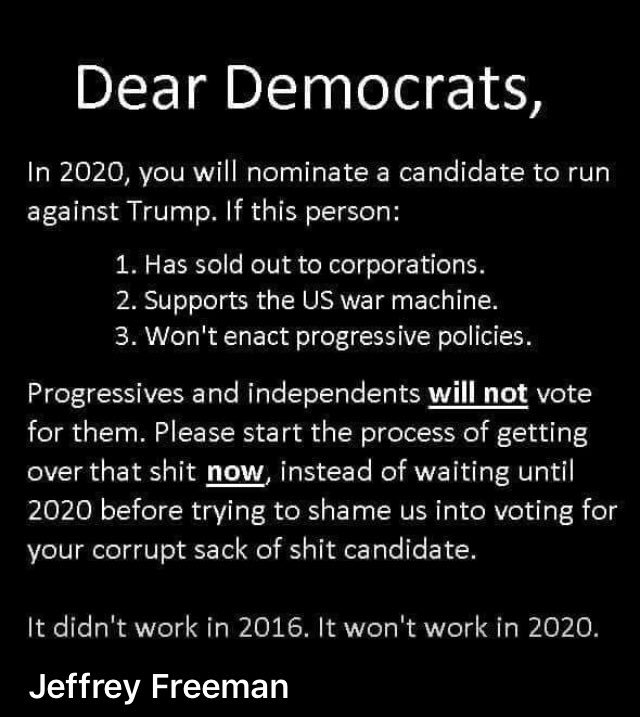 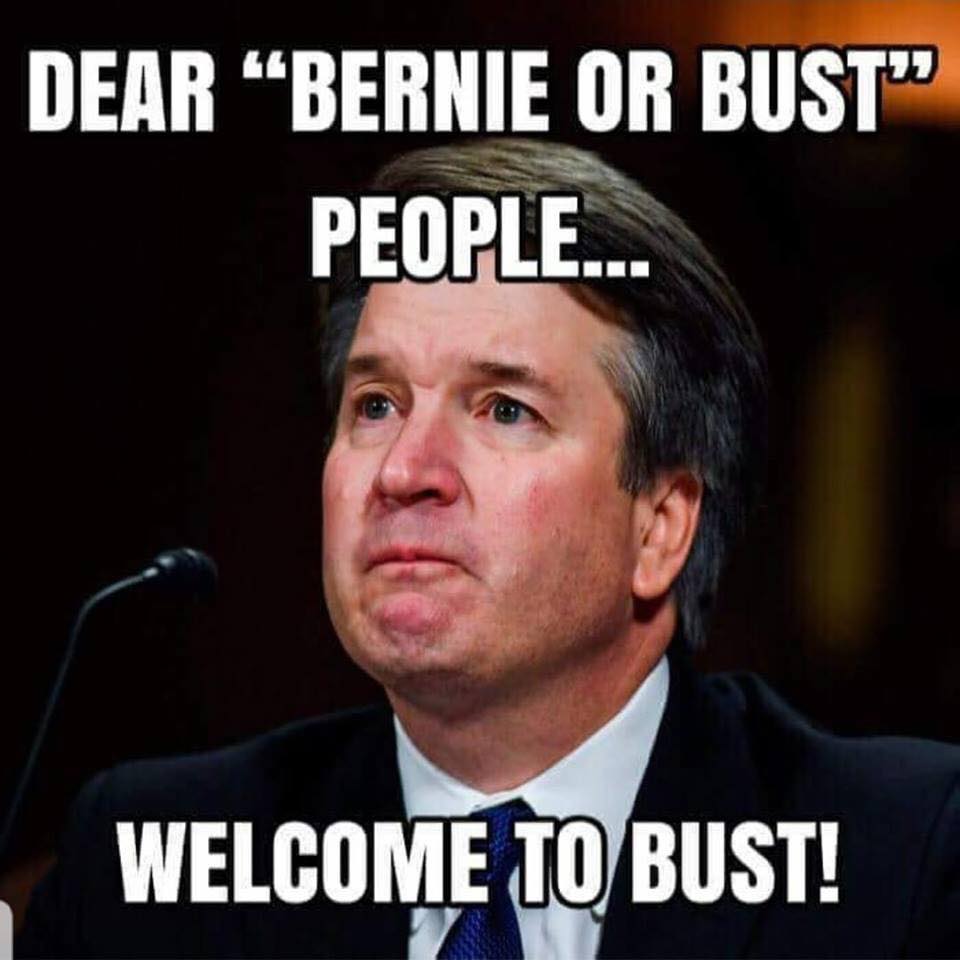 I could show dozens of other examples of how Trump is far, far worse than Hillary would have been. Only on militarism is it unclear whether Trump is worse. Hillary is a neocon. But Trump may start a war with Iran, North Korea, or China; and he is giving billions more to the military. And he is pulling out of the nuclear arms treaty with Russia.

But I understand where such Bernie-or-Busters are coming from.

If we could rate politicians on a scale of virtue, with 0 being pure evil and 100 being pure good, we might rate dictators such as Hitler and Stalin in the low single digits. (They didn’t murder everybody.) Let’s say Dick Cheney is a 10, George W. Bush is 15, Bernie Sanders is 75, Dennis Kucinich is 85. What’s Trump? 20? What’s Hillary? 30? 40? 50? 60? What’s Obama? 40? 50? 60? Your ratings will differ. But given your ratings, suppose you’re voting in an election in which the two leading candidates are on the evil side of the scale: under 50. Suppose that one candidate scores a 10 (very evil) and the other scores a 35 (somewhat evil). Would that difference be enough to warrant voting for the lesser-of-two-evils? How about if their ratings were 10 versus 48? 10 versus 15? 30 versus 40?

Perhaps it would take a 20 point spread for you to vote for the lesser-of-two-evils.

Of course, the logic of lesser-of-two-evilism should take into account not just the two leading candidates but also third-party candidates, their chances of winning, and, most importantly, the effect of our votes on future elections. Such considerations greatly complicate the reasoning and weighing of effects.

If the third-party candidate has a decent chance of winning, then it might be a risk worth taking to vote for her.

In 2000 and in 2016, everyone knew there was virtually no chance that Nader or Stein would win.

But someone can argue it’s better to vote for a third-party candidate because that will send a message to the future: we will not vote for an evil candidate — at least not one who scores less than, say, 45.

Such reasoning is like a sacrifice: I’m willing to suffer for the next four years (or next 40 years, realistically, given the judicial picks) so that future politicians will think twice before crossing a line.

Such a strategy might work. It can be quite costly. It’s not clear that future politicians will hear the message. I suppose it’s like the decision a general in a war needs to make: should I sacrifice these troops to set us up for victory in the future.

I suspect, though, that the votes by leftists for Nader in 2000 and for Stein in 2016 sent the following message to Democrats: “We Nader and Stein supporters are fools. Ignore us.”

There’s yet another way to view lesser-of-two-evilism. Instead of looking at the consequences of your vote, look at the virtue of the candidates. In such a case, one could have a principle: I will not vote for candidates who are less than, say, 40 on the evil scale, no matter how evil the more evil candidate is.  Such a view of voting largely ignores consequences.  It’s not a view that I support. How about you?

For folks who have not been present at non-violent demonstrations it may be helpful to understand that the original black block is the riot police who come out and assault non-violent demonstrators in a wholesale fashion. Some pretty peaceful and peace-loving folks have been assaulted by the police. Some of you may know Dorli Rainey […]