I went to a Town Hall meeting in Seattle last night to hear hedge fund billionaire and progressive activist Tom Steyer call for support in his project to impeach Donald Trump.

Steyer briefly sketched the case for impeachment. Almost the entire meeting was taken up by his responding to questions from the audience, which packed an old, deteriorating warehouse in the Sodo district of South Seattle.

There was plenty of free food. Outside the hall, there was a Trump supporter holding a “Trump 2020” sign.

Steyer admitted that unless the Democrats take back the House in November, the chances of impeachment are very slim.  But even most Democrats seem uninterested in pursuing impeachment against Trump — the only Washington State U.S. House member to support Al Green’s impeachment resolution was Pramila Jayapal. Many Democrats think impeachment efforts are likely to backfire, as they apparently did for Republicans when they tried to impeach Bill Clinton.   Likewise, Patty Murray and Jay Inslee asked members of the Washington State legislature to stop their efforts to impeach George W. Bush.

Steyer said that impeachment will happen only if the American people rise up and demand an end to the dangerous presidency of Donald Trump. 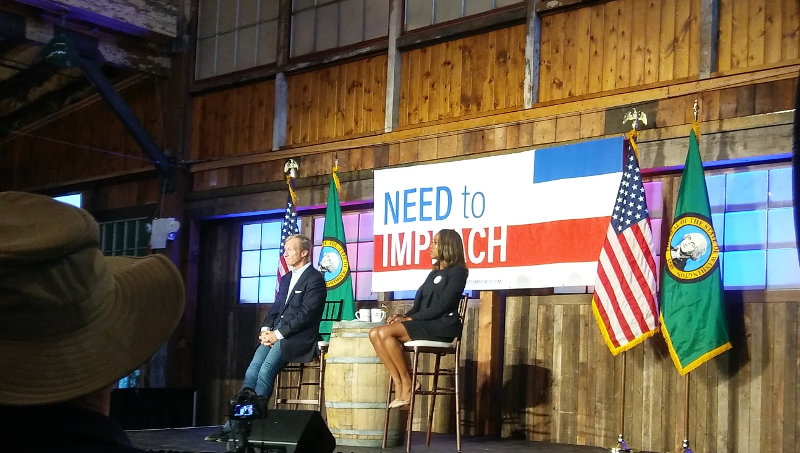 But 42% of Americans apparently support Trump, whose approval rating has been increasing.  The Republicans tax plan pumped hundreds of billions of dollars into the economy, largely into the pockets of rich people and corporations who will fund propaganda to convince the public to support the GOP and Trump. If Trump manages to make peace with North Korea, no matter at what price, GOP prospects will be brighter.

It is difficult to be optimistic about the near or medium term future of America.

Much of the meeting was spent discussing health care, the environment, voting rights, fair elections, campaign finance, immigration, and other issues.  Several people asked Steyer whether he plans to run for President in 2020. He refused to say Yes or No and said, instead, that we need to concentrate on the midterm elections.

Steyer is smart and (but) mild-mannered.

After the speech I got to speak to Steyer and to shake his hand. I asked him if he can enlist the support of any other billionaires willing to help save America and the world.  He smiled warmly, said that he’s trying and that he can sure use the help.  He continued chatting with other people.

We were all asked to show our IDs on entry. There were photographers taking everyone’s photo.  My friend and I presumed this was for security purposes.

My friend lives in Medina, where Bill Gates, Jeff Bezos and other super-wealthy people reside. My friend has billionaire neighbors.

Perhaps activists should hold signs near Medina calling on — begging — rich people there to help save the world.

As Ralph Nader said in his book, Only the Super-Rich can Save Us!  After all, they can’t take it with them.

Meanwhile, it may be wise to concentrate on local races.

One Reply to “Tim Steyer, impeachment, and saving America”