It’s official. We are running a write-in campaign against Jim McIntire for Washington State Treasurer.

I have imposed on my friend Dana Walker to accept the role of running against the previously unopposed Jim McIntire for Washington State Treasurer.

Here is what Dana had to say about the write-in campaign: Hi, I am Dana Walker and while I am somewhat ambivalent about this ad (I am proud of the fact that I would make a lousy politician) I approve of it nonetheless.

Do you think McIntire would debate me?

I don’t think McIntire will want to debate Dana, but we will make the offer.

Dana Walker for State Treasurer. Write it in.

Or write in your favorite candidate who is not a creature of the Wall Street Banks.

We deserve better than Jim McIntire as Washington State Treasurer. 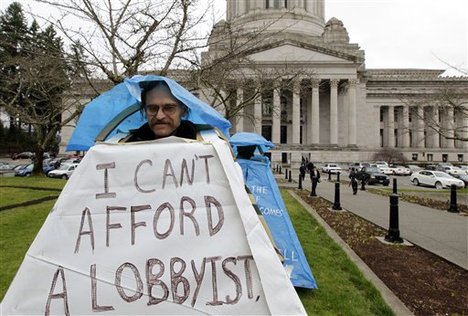 On Speaking To Power, Or, When Sanity’s Gone, There’s Always Satire

So everybody’s hearing the news, right? There is a tentative debt ceiling deal, and this Administration and Congressional Democrats seem to have won everything they wanted: Republicans get to have multiple “we don’t approve” votes before 2012 on raising the debt ceiling, there won’t be any new revenue, there’s going to be another “hostage-taking” event […]

Author Clive Boddy defines psychopaths as “totally heartless, totally ruthless and totally calculating in their approach to life.” That fits corporations to a T, since by law their only motivation is profit for the shareholders. Comments comments