After a short introduction by Dana Ralph, Mayor of Kent, Rep. Smith spent twenty minutes giving an overview of his political positions.    They were uniformly progressive.  He spoke on concentration of wealth, racism, sexism, immigration, gun control, corporate control, taxation,militarism, and impeachment.  Most of the two hours were spent on constituents’ questions.

If there were any Trump supporters in the audience at the town hall in the IBEW union building in Kent, they stayed silent.    Rep. Smith (no relation) didn’t hide his disapproval (perhaps contempt) for the president.

Smith advised not to let Trump drive you crazy. (A couple of women in the audience said, during questioning, that they can’t sleep because of Trump.) Trump wants us to be crazy. Yes, we need to fight and be tough. But we need to be smart.

According to Wikipedia, the 9th Congressional District is the first CD in Washington State with a majority of residents who are racial or ethnic minorities.  Most of the audience members were white. A few people of color asked questions. 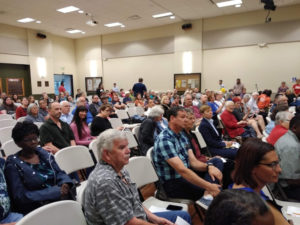 On impeachment, Smith said he supports an inquiry but not yet impeachment proceedings. He seemed to agree with an eloquent questioner’s warning that impeachment will likely fail (in the Senate) and Trump will use it to claim exoneration.

Smith said the only times the Democrats have had control of all three branches of the federal government were in 1994 and again in 2010. Both times the Dems formed a circular firing squad, resulting in handing power to Republicans — Newt Gingrich in 1994 and the Tea Party in 2010 and then Donald Trump in 2016.  Smith doesn’t want to see what Republican gets power in 2022 if Dems win in 2020 and if they then have another circular firing squad.

Smith said grassroots activism is what helped Dems take back the House in 2018. When he ran for office 20 years ago or so, he was lucky to get 50 volunteers helping him knock on doors on weekends and he raised about $700,000.   When Kim Shrier ran last years in the 8th CD, she had 1000 volunteers knocking on doors,  and she was able to raise $10,000,000. Smith mentioned Indivisble as an example of an effective progressive advocacy group.

The GOP has a simple message, he said: lower taxes, less government, and more God. And its constituency is mainly whites and mainly male. So it’s easy for Republicans to stay on message. In 2020 it seems their message will be: defend the country against Democrats who support socialism and want open borders. The Democrats have a diverse constituency with interests in a variety of issues. Democrats actually want to solve problems. Because of this, the Dems have a harder time uniting their base.

[Smith didn’t mention the centrism/corruption of some Dems.]

Smith said he’d agree to a proposal to get rid of the Electoral College. He pointed out that because of the U.S. Constitution’s rules about the Senate, small states have as many senators (two) as large states. So Democratic Senators represent 40,000,000 more constituents than do the GOP senators, yet the GOP controls the Senate.

Smith decried the high concentration of wealth. “I support capitalism. But it disproportionately benefits a few people.”   Because of inequality, people can’t afford necessities including health care, education, and housing.  We need universal access health care.   Strong unions are important.  Amazon is the largest corporation; it can afford to pay warehouse workers $30/hour. (Smith didn’t mention that Amazon paid $0 in federal taxes for two years in a row, despite a $11 billion profit last year.)

Corporations exist because we allow them to exist, he said.

He said we need to stop the destruction of the planet from pollution and over-consumption.   But there is this “willful ignorance” of President Trump. If scientists say X, you can be sure he won’t do X.   At his rallies, he hands out plastic straws as a way to ridicule environmentalism.

Smith spoke against systemic our country’s racism and sexism. We need to realize Martin Luther King’s dream of a nation where people are judged not by the color of their skin, etc., but by the content of their character.

While recognizing the need for secure borders, Rep. Smith said that Trump’s language and policies are divisive and discriminatory. Its aim is to dehumanize immigrants.  It led to violence (e.g., El Paso).  The GOP are using immigration to fire up their base.  Seeking asylum is not a crime.  It’s inhumane to expel people who’ve lived here for years. Some people arrested by the ICE were born here, or were brought here as children, and they never saw their parent’s country,  but they failed to fill out proper paperwork.  Immigration and diversity are the great strength of the U.S. (applause)

Someone asked Smith what he’ll do to stop the concentration camps at the border with Mexico.

He said gun violence is due to hateful rhetoric and to lax gun control.  We don’t allow people to own tanks or machine guns. Likewise, semi-automatic weapons and high-capacity magazines are not appropriate for civilians.  The House passed the Universal Background Check bill. The Senate refused to consider it.

Rep. Smith told a story. Back when he was running for the state legislature (1996?) he knocked on about 20,000 doors. Nobody spoke in favor of gun control. But hundreds of people asked him to defend their gun rights. The NRA has been well organized.

The country needs to rely less on military actions and more on diplomacy. He criticized Trump for cutting the State Department budget. Trump wanted to cut it even more, but even GOP Senators opposed that.

As he does at many of his town halls, Rep. Smith pointed out that the American public wants the impossible:  both low taxes and  and high spending on social programs and the military.

Rep. Smith said that politics is difficult. But the worst political experiences of his life were (1) dealing with a local homeowners’ association, and (2) elite youth soccer. (laughter)

I asked Rep. Smith about the high military budget (54% of discretionary spending) and the trillions of dollars wasted in the wars and proxy wars in Iraq, Afghanistan, South America, etc.  Not to mention the destruction and deaths wrought.   He said, no matter how much Congress gives the Pentagon, they want more.  He said that at first Trump wanted relatively low spending of $700 billion.   GOP senators convinced him to ask for $750 B.   The House NDAA (National Defense Authorization Act) bill asked for $733 B.  (Not a single Republican House member voted for the Democrats’ NDAA, due to the lower spending and the amendments.) Apparently, the House and Senate will compromise on $738 B.  Smith agrees even $733 is too much.

Smith said that his staff did an amazing amount of work to prepare the NDAA; they didn’t sleep for a month.

Someone asked a question about giving higher pay for interns in his political office. He said that pay for staff and for congressmen themselves is a difficult issue.  Constituents often are angry if the Congress raises its own pay rates.

Someone asked Rep. Smith about supporting the right of people to boycott Israel (BDS movement).  Smith said that while he’s highly critical of Netanyahu– whom he called as bad for Israel as Trump is for the U.S. — and highly critical of many of Israel’s policies about settlements, etc., he supports Israel’s right to exist and opposes the right of return for Palestinians, because that would lead to the destruction of Israel. Some of the BDS rhetoric goes too far.

A Gold Star mother spoke and was in tears. She called for removal of the widow’s tax on military families. Other women spoke of veteran benefits and care.

A dark-skinned man from Bangladesh or Burma (?) spoke and asked for help with some serious situation (human rights abuse?  refugees? violence?). I’m embarrassed that due to his strong accent, I was unable to understand what he was saying. Rep. Smith promised to help. [Note: someone later informed me: The guy with the accent was talking about the Rohingya ethnic cleansing in Myanmar.]

Only about 40 people showed up at Rep. Adam Smith’s Town Hall Meeting in Newcastle on Thursday evening. Smith said that Americans are deeply in denial about the choices we face.  When polled, people say they want the same or more government spending on education, health care, research, etc., and even the military. But nobody […]

(update 2020-07-10) Rep. Adam Smith (D -CD09 WA), Chair of the House Armed Services Committee, is continuing his mostly hawkish management of the Pentagon with the 2021 National Defense Authorization Act. The NDAA raises the base Pentagon budget to $740.5 billion (versus $738 this for the 2020 budget). It restricts President Trump’s ability to withdraw troops […]

Should a progressive vote for Adam Smith or for Sarah Smith in the 9th CD?

I’m on the fence about whether to vote for Adam Smith or Sarah Smith for Congress this year. In short, Adam Smith has more experience, will have more power if elected,  has a decent but mixed voting record, and has moved left as his district has become more progressive. Sarah Smith would more strongly work […]