Amidst all the finger-pointing and self-immolation on the left, we need to acknowledge that the main cause of Hillary’s loss was the formidable propaganda machine of the Republican Party.

And the ignorance, gullibility and hatefulness of so many Americans.

After all, the most shocking thing about the 2016 election is that Donald Trump could win despite his many obvious negatives. 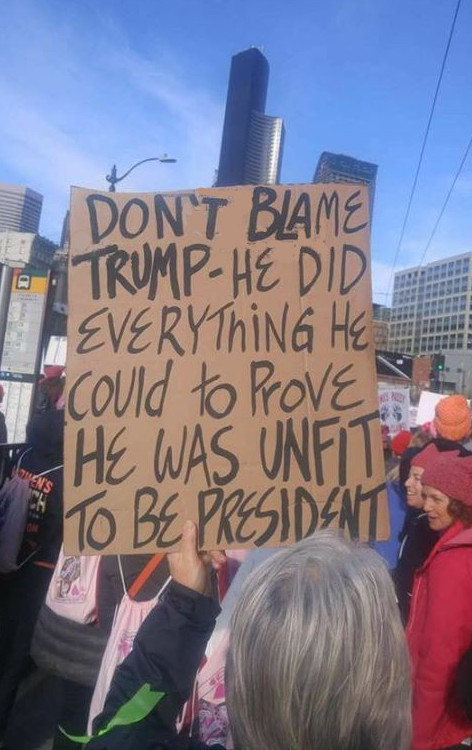 No matter who won the Democratic nomination, a large proportion of Republican voters would have voted for the Republican nominee.

A similar thing can be said for the election of 2004, when George W. Bush won re-election, despite the disaster of the war in Iraq and the scandals and corruptions surrounding his administration.  Even in 2008, 45.7% of voters voted for John McCain.

Of course, Hillary was a perfect target for GOP hatred. Her hawkishness, friendliness to Wall Street, flip-flops, carelessness, and dirty tricks towards Sanders made her vulnerable and suppressed Democratic turnout. But millions of voters believed that Hillary was far worse than she is. The hatefulness towards her was unhealthy.

For this, Trump can thank Fox News, AM talk radio, Breitbart News, and other conservative media outlets, which were able to rouse up their base to a frenzy of hatred of Hillary, of government, and of liberals.  In contrast, Trump was able to escape accountability for his outrageous statements and scandals:  Trump University, Trump Foundation, bankruptcies, shady business dealings, not paying contractors, failure to release tax returns, likely tax evasion, lies during the debates, racist comments, sexual escapades, conspiracy mongering about Obama’s citizenship, denial of established scientific consensus, etc.

Aside from claiming that global climate change is a hoax perpetrated by the Chinese, Trump has said that vaccines cause autism, that environmentally-friendly light bulbs cause cancer, and that fracking “poses zero health risks” while wind farms are “bad for people’s health”.   He called Obama the founder of ISIS.   The list of outrages goes on and on.

Hillary was swift-boated about her private email server, about the Clinton Foundation, and about Pizzagate. The hatred towards her and bias against her were pathological.

On numerous matters of fact and policy, conservatives live in an alternate reality. The partisan divide in American politics is as wide as ever.

A CNN/ORC poll taken in 2015 found that 43 percent of Republicans believed that Obama is a Muslim.

According to the Pew Research Center, “Just over a quarter of the public – 28% – says climate scientists have a solid understanding of the causes of climate change. And even fewer, 19%, of adults say the same about climate scientists’ understanding of the best ways to address climate change.” “Consistent with past Pew Research Center surveys, most liberal Democrats espouse human-caused climate change, while most conservative Republicans reject it.”  “Thirty percent of Fox News viewers say that Obama is ‘probably’ or ‘definitely’ not a citizen, and another nine percent say that they do not know. In comparison, only 13 percent of CNN viewers, and seven percent of MSNBC viewers say the same.”

A 2016 survey taken by Yale and George Mason University found that only 47% of Republicans believe in climate change.

“A survey by YouGov found that by December 1, 43 percent of Republicans accepted the [Trump] claim that millions of people had voted illegally in 2016.”  (source)

Overall, 42 percent of Americans believe that U.S. forces found active weapons of mass destruction program in Iraq. Republicans are more likely to hold this belief than Democrats: fifty-one percent of Republicans think it’s “probably” or “definitely” true that an active program was found after the 2003 invasion, with 14 percent saying that it was definitely true.

According to CBS News, “Nearly half of Americans incorrectly think President Obama started the the bank bailout program, otherwise known as the Troubled Asset Relief Program (TARP), a new poll shows. Just 34 percent of Americans surveyed by the Pew Research Center correctly said that TARP was enacted by the Bush administration.”

Democrats’ policy positions play a much smaller role in the outcomes than we’d like to think. What matters most is perception and spin, not substance.

How to explain the toxic hatred of Hillary and liberals?  Partly, it’s misogyny. But I agree with the conclusion of Amanda Marcotte, who says, in Conservatism turned toxic: Donald Trump’s fanbase has no actual ideology, just a nihilistic hatred of liberals, “Trump’s victory was the result of decades of right-wing hate rhetoric, curdling into a totally negative worldview.”

I say all this as a fervent Bernie Sanders supporter who was highly critical of Hillary’s hawkishness and friendliness to Wall Street. I was critical of her but I don’t hate her the way even many progressives do.  I thought she was intelligent and graceful.  I am more horrified by the success of the GOP propaganda machine at polluting peoples’ minds with conspiracy theories, falsehoods, and hatred.

I’m not asking for a pass for Hillary and the DNC. I acknowledge their corruptions and their mistakes. In particular, the Democrats shouldn’t have selected Hillary, given her hawkishness, her ties to Wall Street, the extreme hatred of her by so many people, and the nation’s populist mood. I’m asking for proportional accountability. Hillary, the Democratic Party, the country, and the world will pay a price far out of proportion to her culpability and to the accountability Trump and Republicans received for their many wrongdoings and statements.

Too often, Obama and Hillary were hawks and neoliberal sellouts. So, it’s hard to feel sympathy for them — except that Trump and the Republicans are far worse. My point is: the GOP had great success at exaggerating Hillary’s crookedness while hiding their own. Trump was the Teflon Don, if ever there was one.   In fact, not only was Hillary the lesser-of-two-evils, but she was good on on some issues and moderate on many others.

They go low, we go high, they win.

When Trump and the Republicans are tough, they are perceived as strong and bold. When Hillary was tough, she was portrayed as a harridan and a witch.

Democrats, on the other hand, are wimps, compared to the Republicans. In 2008, after eight years of misrule under Bush and the Republicans, Americans were eager for peace and for populist policies. As a candidate, Obama promised change. But once he was in office, Obama turned into a moderate. He tried to be post-partisan.  He compromised early and often. He surrounded himself with Wall Street cornies. He wanted to look forward, so he hid the war crimes of the Bush Administration and the fraud of Wall Street banks from the American people.    As Obama said of himself, “My policies are so mainstream that if I had set the same policies … back in the 1980s, I would be considered a moderate Republican.” Obama’s unwillingness to fight, and to stand up to Wall Street and the defense establishment depressed turnout, angered many voters, and allowed Trump to pursue his populist playbook.

You may argue, with some validity, that Obama needed to compromise to get anything done. But politicians score few points by compromising. Obama should have fought hard for single-payer health care, or at least a public option.   Instead, he allowed Max Baucus and other conservative Democrats to whittle down the Affordable Care Act in a fruitless attempt to win GOP backing. In the end, no Republican voted for it, and we were left with a health care plan designed by the Heritage Foundation and tested by Mitt Romney.

Obama is a great orator and a smart man. He allowed the GOP to steamroll the Democratic Party, who now have lost control of the House, the Senate, the White House, and a majority of state legislatures and governorships.

On the other hand. all those progressives who refused to vote for the lesser of two evils can enjoy the satisfaction of standing up for their principles as we face slashes to the EPA, public education, Medicare, Social Security, worker rights, women’s rights, gay rights, consumer rights, and financial regulations. Plus decades of conservative rule in the Supreme Court. And more tax cuts for rich people. And increased defense spending. And possible wars with China and Iran. And fewer people with medical insurance. I understand where the purists were coming from and rather agree that Clinton and Obama got what they deserved. Still, lesser-of-two-evils is lesser-of-two-evils, and on many issues Hillary was moderate. On women’s rights she was progressive.

But the blame for the election loss spreads far and wide. This article has argued that mostly the blame rests with the GOP propaganda machine, which has polluted peoples’ minds. Here is a fuller list of who and what to blame. 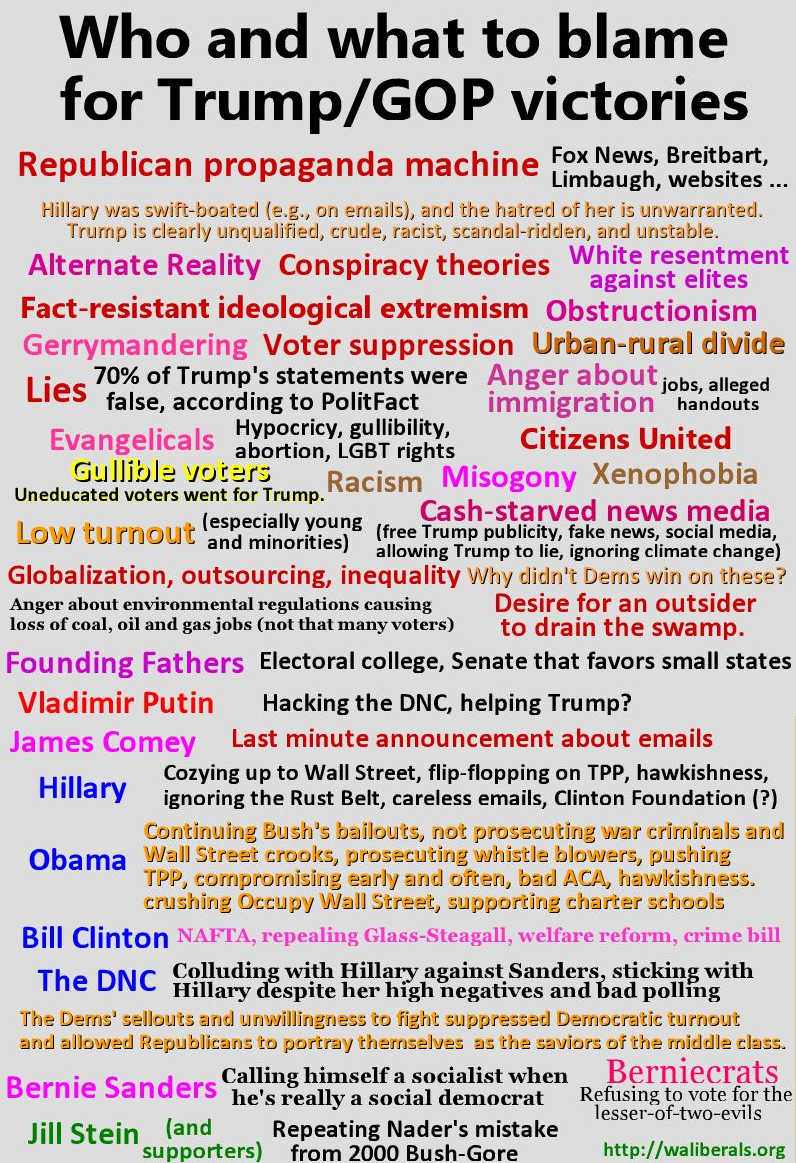 From USA Today’s story Challenger concedes GOP primary to controversial rep A transcript of DesJarlais’ 2001 divorce showed that he and his then-wife, Susan, made a mutual decision to have two abortions. Still another woman has charged that DesJarlais encouraged her to get an abortion as well. DesJarlais, a doctor whose congressional seat was a […]

Quickie link: The Golden Age of Rich People Not Paying Their Taxes

The Golden Age of Rich People Not Paying Their Taxes “An eight-year [Republican-led] campaign to slash the IRS’s budget has left the agency understaffed, hamstrung, and operating with archaic equipment. The result: a hundred-billion-dollar heist.” I have a friend who works as an examiner for the IRS; he said the same thing: they’re woefully understaffed […]

What Is the Far Right’s Endgame? A Society That Suppresses the Majority Nancy MacLean, author of an intellectual biography of James McGill Buchanan, explains how this little-known libertarian’s work is influencing modern-day politics. Comments comments