Early this morning Seattle police entered the CHOP zone pushing people out of the area with batons and using pepper spray which has been banned by the city council. (Apparently that doesn’t mean anything to SPD who do pretty much whatever they want while thumbing their nose at the courts and the council’s oversight, much like the police dept. in Portland which loves the smell of tear gas in the morning…) Doesn’t look like the city council’s unanimous vote to demilitarize the SPD has had any discernible effect. They moved in as a military force and were brutal to anyone in the way. Police made very aggressive arrests that looked like excessive use of force.
32 reported arrests so far. This is about the same number of people who were arrested during the sweep of the historic Occupy Seattle encampment at Westlake Park during that movement. 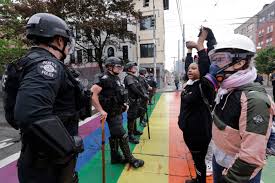 Police attacked tents in Cal Anderson Park today looking for inhabitants. They were aggressive and seemed angry as they tore some tents apart. As far as I know, most of the property at the camp is being confiscated and destroyed by police and Parks Dept. personnel. Apparently that also includes community supplies and food. One of the first signs to be taken down was the black fist on the pole just outside of the east precinct. There did seem to be something symbolic about that act by city workers and police.

Livestreamer Omari Salisbury was notified by SPD that if he did not cease broadcasting from the Converge Media office next to the police station, he would be arrested. SPD claims they are empowered to do that via Mayor Durkan’s executive order. The order will be in effect for ten days. So much for the First Amendment rights to peaceful assembly and freedom of the press!

As of this afternoon Seattle riot police were blocking the street at Broadway & Pine and not allowing access to that area, so I’m not really sure how that is going to help local businesses at this point. SPD swept up dozens of people in their raid, many of whom will surely be mistreated and traumatized by their experiences today. Seattle police always seem to tackle protesters, throwing them to the ground and sitting on top of them basically, to keep the arrestee from moving. Large officers with their knees in your back, on legs, etc. can be very painful or very dangerous. The cops don’t seem to care.

The FBI and Washington State Patrol were also reportedly participating in the sweep of the CHOP zone today. As I speak crews are throwing the artwork and tables, tents and other items into garbage bins and hauling the material away presumably to the city dump.

Meanwhile right wing agitators are ecstatic that Mayor Durkan and Police Chief Carmen Best have adopted Trump’s hard line attitude towards the protesters. Fox News, KOMO and other neo conservative media outlets feel vindicated after weeks of negative reporting on the Black Lives Matter George Floyd demonstrations. Along the way there were multiple shootings near the site leaving two young black men dead. Part of my sadness comes from the fact that the original issues which inspired this uprising may sometimes get lost in all of the politicizing, factionalism and right wing lies being perpetrated about the protests.

Be advised that protests against racism and police brutality have not ended in Seattle. After weeks of triumph and tragedy the community experienced a historic watershed moment and none of us will ever be the same again.

The powers that be will continue to try and control the narrative but petty politics and personal agendas will not deter an entire generation of new young activists from hitting the streets until their demands for social, economic and justice reforms are met.

Flush the TPP, actions in Seattle

Photo by George Frey The radical right here in America now boasts two fresh heroes: Cliven Bundy and Donald Sterling. With their eager penchant for plainspoken hypocrisy and outright bigotry, they ought to be a swell choice for the Tea Party/Republican presidential nomination come 2016. First, good old boy Cliven Bundy rode heroically onto the […]