Amanda’s Ripley’s The Smartest Kids in the World is a call for rigor and equity in K-12 education.

Ripley follows U.S. exchange students as they visit schools in Finland, South Korea, and Poland — three countries whose students score significantly higher than U.S. students on the PISA (Program for International Student Assessment) test, especially in math and the sciences.   She uses their experiences to draw attention to things those countries do to educate their kids and how the U.S. can learn from them. 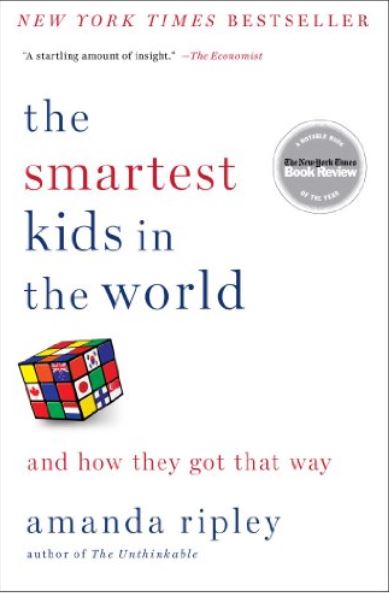 Finland’s students score highest in PISA. The country achieved that by

In the United States, teachers tend to be friends with their students. In other countries, teachers are stricter and play the role of authority figures.    The students respect and fear the teachers more than in the U.S.

American parents tend to spoil their kids.  Parents are too concerned with raising their kids’ self-esteem.

American schools are often too obsessed with football and other sports.

Yet the U.S. spends more money per student than the other countries. And Finnish kids get less homework than American kids.

Ripley tells the story of an exchange student from overseas who attended a U.S. school and was annoyed at the amount of busy work (circle time, making posters) and the lack of rigor. Also, the exchange student did her homework, but many U.S. kids refused to — and they got away with it.

Likewise, Ripley tells another story, about an American exchange student in Finland asking her Finnish classmates why (on earth) kids study so much there? The Finns were perplexed by the question. Clearly, the aim is to master the material, get a good grade, and be able to have a good career.

Part of the problem, I suspect, may be the anti-intellectualism and individualism of American society. Such attitudes are celebrated by popular music such as Pink Floyd’s song Another Brick in the Wall, which contains the line, “We don’t need no education,” and Paul Simon’s song Kodachrome, which contains the line “When I think back on all the crap I learned in high school, it’s a wonder I can think at all.”

Ripley tells a story about meeting a well-meaning teacher in an inner-city school in America. The teacher explained to Ripley that her students had unstable home lives. Often they lived in single-parent households where their caregivers weren’t highly educated. So, the teacher had largely given up on the students and did not have high expectations for them. She was sympathetic and not stern.    At the end of the year, her students were even further behind.

Ripley describes how at one school she visited in America, 60% of the grade was based on “effort.” But a new teacher arrived and unabashedly handed out Fs when students didn’t perform well, despite push-back from students and parents.  One girl who had received an F complained, at first, but then raised her grade to a C the next year and felt proud.

South Korea achieved educational excellence in a manner quite different from Finland. South Korean schools are “pressure cookers.” Often the kids study from 8AM til close to midnight.  Most South Korean kids go to cram schools (hagowns) after public school.   The government had to pass laws to make it illegal for such schools to stay open past 10PM. Still, some schools continued to be in violation. The cram schools train students to take the rigorous and all-important standardized tests that high school students take in their senior year. The tests determine whether they can enter the highly selective colleges.

U.S. students take more standardized tests than the other countries, but the tests are “low stakes” and too frequent. Federal programs like George W. Bush’s No Child Left Behind and Barack Obama’s Race to the Top did a lot of measurement of student performance but didn’t do much to change incentives, methods or resources.

Ripley explained how Poland, a much poor country than the U.S., was able to raise its test scores, even in poverty-ridden areas.   Despite push-back, political leaders instituted needed changes. They did this because of bad economic conditions and the realization that they were falling behind. Poland implemented four reforms, under the guidance of Miroslaw Handke, Poland’s minister of education from 1997.  Both Handke and the Prime Minister were former chemistry professors. The four reforms were:

Ripley’s book is a pleasure to read. To a large extent, it’s an indictment of American softness and inequality. Even elite, wealthy school districts in America under-perform the best overseas countries.

Even if you disagree with some of its conclusions, the book raises important issues.  I suspect that many U.S. teachers and parents will oppose the book’s emphasis on consequential (but rare) standardized testing and on accountability.

How will you help the Wall Street and Oct 6 protesters?

The Wall Street protests are getting media attention.  How will you help? What protests are planned for your community? On Thursday, Oct. 6 there’ll be a large protest in D.C., directed not just at Wall Street corruption but also at the out-of-control militarism and the general corruption and lack of accountability in our nation’s capital. […]

Centrist Democrats  in the Washington State Senate  (the Road Kill Caucus) have joined with Republicans to sponsor and support SB 2109 (“Reforming workers’ compensation through authorization of voluntary settlements and creation of a return-to-work subsidy program.”) The bill is strongly opposed by Labor and other Democratic groups.  The article Workers compensation bill SB5566: a step […]

Occupy Wall Street: Day 9 – 200+ Arrested – MSM Finally Wake-up Yesterday between 121 and 200 protesters were arrested when a peaceful march of approximately 2,000 headed to Union Square to spread the word about their occupation for emancipation from a corrupt economic and financial system. The events made news in many national MSM […]