The image below (original source unknown) is outrageous and politically incorrect. But it’s also funny and insightful. 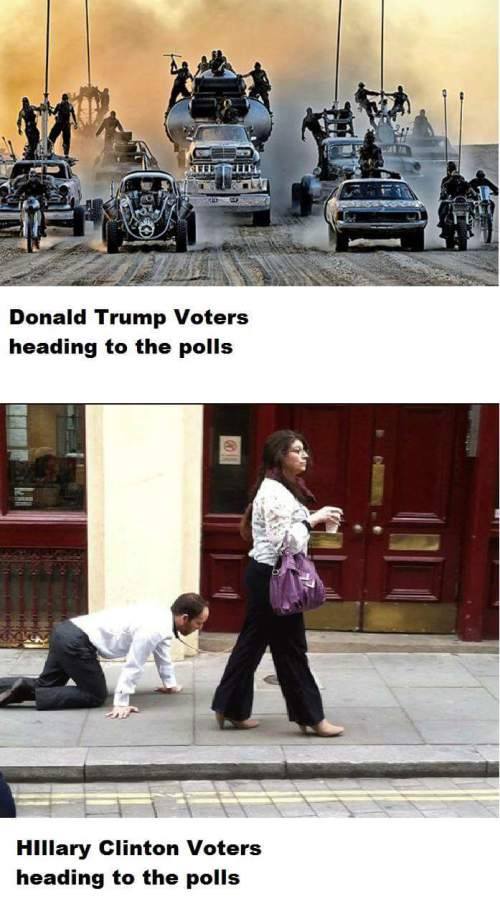 The gender-divide in the support for Hillary versus Trump is extreme. As of mid-October, Hillary was ahead by 20 points among women, according to an NBC/Wall Street Journal poll, while Trump leads among men:

Looking inside the numbers of the two-way horse race, Clinton holds a 20-point lead among female voters (55 percent to 35 percent), while Trump is ahead among men by just three points (48 percent to 45 percent).

Some Trump supporters may think that men who vote for Hillary are being henpecked into voting for her (as the image above suggests).

Of course, Trump’s mistreatment of women, and his frequent insulting and degrading comments towards women, offended many people.

The majority of voters are women (at least in Washington State). Let’s hope women save us from Trump and from GOP control of the state senate.  In the 41st LD, both state representatives are women (Clibborn and Senn).  If Lisa Wellman can defeat Steve Litzow, women will make a clean sweep and that may be enough to flip the senate.

King County Executive Dow Constantine spoke to the 41st LD Democrats Wednesday night. He said that King County is the 13th largest county in the country. It has a population of over 2,000,000 people, making it more populous than 13 or 14 states (each of which has two US senators).  King County accounts for about […]

Opposition to the Boeing deal

Senator Bob Hasegawa explains his opposition to the Governor’s bill to extend tax breaks to Boeing: http://blog.senatedemocrats.wa.gov/hasegawa/hasegawa-explains-vote-against-boeing-tax-cuts/ Hasegawa said the bill is being rushed; there are 9 billion dollars at stake. There’s insufficient data to back up the claims of a 3-to-1 return on investments.  There’s no guarantee that Boeing won’t make room for 777 […]