A group called American Voices of Reason posted the following on facebook. 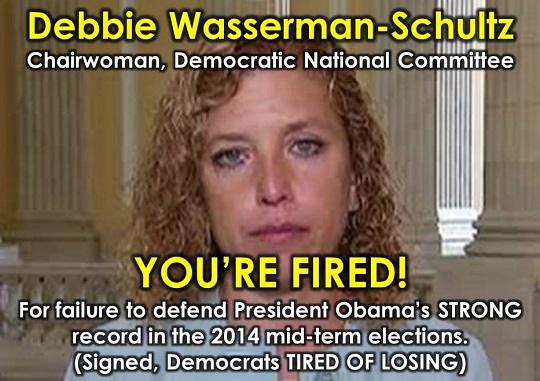 It is time for Democratic voters to hold party leaders accountable.

Debbie Wasserman-Schultz is a complete FAILURE as leader of the Democratic National Committee.

Republicans now have control of the Senate and they have a record-number of seats in the House. Additionally Republicans are Governors in 30 out of 50 states.

Democrats have a STRONG RECORD over the past six years under President Obama. Debbie Wasserman-Schultz FAILED to highlight the President’s STRONG RECORD.

Turnout last week was low — under 37% nationwide and under 50% in Washington State — partly because people voted for Change in 2008 but came to feel betrayed. The country was eager for real Change. The public was disgusted with Republican corruption, mismanagement, and war-mongering. But Obama barely even tried to enact real change. Instead, he aimed for bipartisanship or post-partisanship.  Obama allowed the Tea Party to express populist outrage at government collaboration with plutocrats.  As Obama said of himself, “My policies are so mainstream that if I had set the same policies … back in the 1980s, I would be considered a moderate Republican.”

Also, talk about accountability! How about holding Republican criminals accountable? Obama tried to be “bipartisan” with them. He “looked forward” and didn’t want to dig up past wrongdoing. THAT’S why the Dems lost in 2010, 2012, and 2014. Because Obama tried to play nice with those bastards.

Also, didn’t Obama, as leader of the Party, have any sway over Wasserman-Schultz’s approach? I’d presume he did.

It’s true that the Affordable Care Act, despite its many compromises and weaknesses, did represent a step forward on the path to a fairer and more efficient government-managed health care system (as in many countries overseas).  But Democrats nationwide were unable or unwilling to defend it. And the GOP messaging prevailed. Is that Wasserman-Schultz’s fault?  Obama has the bigger bully pulpit.

Obama sometimes is great at messaging. In other ways, he let the GOP define the terms of dialog. And his policies confused the voters.  He allowed the Republicans to control the messaging, with the result that the Dems got the blame for the bad economy and the lack of progress in D.C.   His lame attempts to rise above partisanship were dismal failures.

Had Obama fought hard and lost it would have been better than compromising and repeatedly losing.   He gained almost nothing from his many compromises with the GOP.

Of course, even more than Obama, the Republicans and their billionaire and corporate buddies are to blame for the mess we’re in. But Obama (“the great black hope”) wasn’t up to the battle. He let the GOP messaging prevail, and the Democrats didn’t vote.

When I volunteered to knock on doors for Democratic State Senator candidate Matt Isenhower last weekend, I was sent to an area of Woodinville with stately homes that must cost well over a million dollars each.  (There are lots of Microsoft millionaires in that part of Washington State.)  Though we were supposed to be targeting likely Democratic voters, it seemed many people were for Republican Andy Hill. My point: Like many swing districts, the 45th legislative district has too many rich people to vote reliably Democratic, and the more rural parts of the district, of course, tend to vote Republican.  Democrat Isenhower lost 53% to 47%.

The people need to hear our messaging, especially about economic inequality, so they stop voting against their own self-interest.  It won’t work in wealthy swing districts, but it could work in rural and less wealthy areas.

Yet in Washington State, neither former Governor Christine Gregoire nor current Governor Jay Inslee, both Democrats, have made any significant effort to educate the public about our regressive tax system, which relies on the regressive sales tax and a regressive Business & Occupation tax that favors profitable corporations because it taxes revenue, not profit. In fact, Governor Inslee’s main action since being elected seems to have been to grant Boeing an $8.7 billion tax break — for which Inslee was rewarded by Boeing’s decision to ship more jobs out of state.

As I’ve been saying for the past four years, the situation is grim and is unlikely to get better soon.    Perhaps Elizabeth Warren can revitalize the Democratic Party.  Bernie Sanders is great, but he’s old and I suspect that the US isn’t ready for a Socialist president.

Unfortunately, Hillary is likely to be even more friendly to Wall Street and the military than Obama.  In fact, Rand Paul is running to to the left of Hillary on those two issues. On the other hand, I doubt Hillary would allow the GOP to walk all over her the way Obama did, in his quixotic attempt at post-partisanship.

As a friend pointed out, it’s encouraging that Alan Grayson won in Florida. It’s a sign that a strong progressive who is unafraid to communicate our messages can win.

Bernie Sanders sums it up

“In negotiation after negotiation, the Democrats continue to give the Republicans almost everything they want.  Despite the fact that our deficit problems were caused by the greed on Wall Street which led to the current horrendous recession, huge tax breaks for the rich and two un-paid for wars, the President and the Democrats have gone […]

“The number that I find most unusual and gives you a sense of what is systemic about it is:  The top 400 people, individuals — you could get them in this space if you squeeze just a little bit — have more wealth now than the bottom 180,000,000 Americans taken together.  That’s a medieval number. […]