One of the Washington State Democratic Legislative District caucuses ran to 12:45 AM. It started at 12 noon.   Several other caucuses took six to eight hours.

On facebook the vast majority of people commenting want to do away with the caucus system and use a primary. For many people, the caucus experience was a nightmare. At mine, the police were ticketing and towing vehicles at one point. 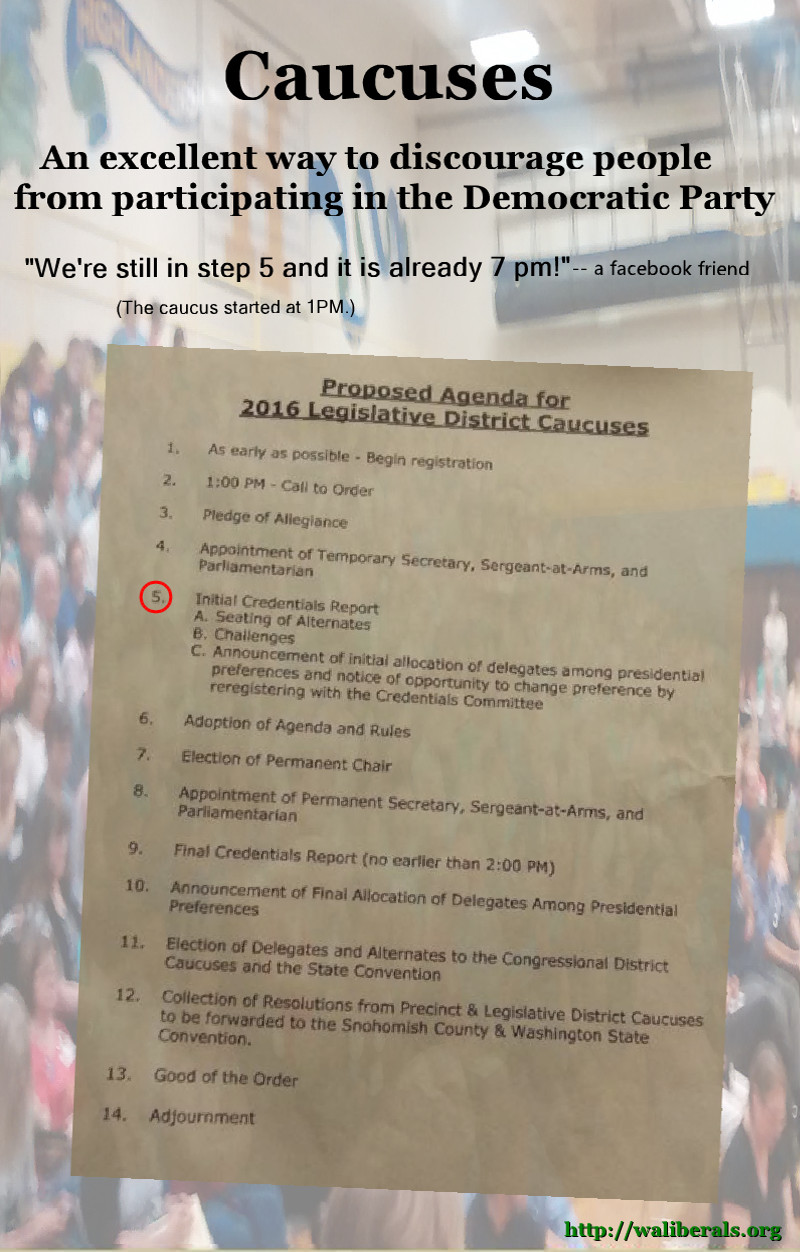 Someone pointed out, though, that caucuses enable outside (nonorthodox) candidates like Sanders to win — at least in states with open caucses, like Washington. Open caucuses mean that anyone can declare themselves a Democrat and vote in the caucus.  This year it’s clear that thousands of Independents — many young people, in particular — caucused for Bernie Sanders.   In states which have closed caucuses or, like New York, which have a closed primary, it’s harder for outside candidates to win.

Also, with primaries, the less informed, more easily misled general public gets to vote, so it’s harder for a committed minority to take over.

Did anyone else encounter issues with the state Democratic Party rule change about alternates moving to other precincts where delegates didn’t show up, as long as they pledged as an alternate for the same candidate?

We had 4 HRC supporters who pledged as Bernie alternates at their last caucus, move to other precincts still claiming to be Sanders alternates, then becoming Sanders delegates, and then change their final votes to Hillary. We all caught on because, we were running so behind, we decided to ask anyone changing their final vote to stand, instead of having to tally all the votes again, assuming no one was going to flip candidates at this point. These 4 people stood up and changed their votes, all from Bernie, to Hillary (which, come on, doesn’t happen). They had put on Hillary stickers and everything.

It was obvious this was something that was planned to try to throw the delegate count. Being there was only 4 of them, it didn’t make a difference, but it seemed obvious this change from the state party was in HRC’s favor and these people knew what they were doing.

Thought I should share. I was in the 44th District.

The Spokesman review is reporting: SEATTLE (AP) — A King County Superior Court judge is scheduled to hear oral arguments Friday over the constitutionality of Washington’s new charter school law. A coalition of parents, educators and community groups say it violates the state Constitution by diverting public school dollars to private organizations that are not […]

July 7, 2011.  Washington, D.C. In a hastily called press conference, President Obama announced his decision Thursday evening to sever formal ties with the Democratic Party and become an Independent. With Senator Joseph Lieberman (I, CT) at his side, the President explained his decision to stunned staff members and journalists. “After many months of frustrating […]

It’s fine to expect instant gratification when downloading an app to your smartphone or streaming a movie to your computer. But we can fairly expect our elected representatives to behave differently than the average consumer, by making choices that are less about short-run returns and more about building for the long-term. Most of the rhetoric […]