The past week has been dominated by Governor Inslee’s climate proposal (and by the Seattle Times editorial board arguing for a revenue-neutral alternative!), so here are some thoughts, with a preface that Divest UW and Green Evans are organizing a climate policy forum for Wednesday night Jan 14 featuring KC Golden from Climate Solutions, yours truly, and hopefully others. Details TBD!

Carbon Washington’s position in brief: As we noted in our open letter to the environmental community, we think a bipartisan approach is a more promising path to climate action than pursuing what we called the Progressive Take-Over of the World. Consequently, while Carbon Washington is certainly not opposed to the Governor’s proposal, we agree with the Seattle Times editorial board when they write that “A revenue-neutral approach — one that would mitigate consumer’s costs of a carbon tax — would be both less financially risky and more politically viable in the divided Legislature.”

Some policy details and analysis. The governor’s climate policy covers a lot of ground, but the focal point is carbon pricing, and his carbon pricing proposal is essentially a California-style cap-and-trade system, with auctioned permit revenue mostly going to education, transportation, and social justice. (It will also almost certainly include linking with California, although I’m not sure if that’s explicitly mentioned.) For all the details see this info from the Governor’s office; in particular scroll down to the policy briefs for the Carbon Pollution Accountability Act, which is the proposal relating to carbon pricing. For an enthusiastic analysis see Kristin Eberhard’s Sightline blog post, which includes this terrific revenue graphic. For a not-enthusiastic analysis see the blog posts from Todd Myers at the Washington Policy Center.

Think of it as a clever “Christmas tree”. It’s a Christmas tree because it’s got lots of ornaments: there’s a California-style cap-and-trade bil, there’s money for education, there’s money for transportation, there’s money for social justice… and that’s just one part of the Governor’s proposal. (See the links above for details about electric vehicles, clean fuels, etc.) And it’s clever because it makes for a compelling legislative strategy given the challengs that lie ahead: having different ornaments allows the governor to reach out to a variety of different interest groups for support and to claim (even if the bills don’t pass) that he tried to make progress on their priorities.

The expert consensus is that the governor’s proposal is unlikely to pass in the legislature. This is not intended to be a downer (and, for the record, unlikely doesn’t mean impossible, so if you want to contact your legislator then read this from Washington Environmental Council) but it is intended to be a reality check. There was an election last month, and as the Seattle Times wrote the day after the election, “The results mean it will be harder for Gov. Jay Inslee to act on an aggressive plan to reduce carbon emissions in the state, or to pass legislation that’s been a priority for Democrats including education and transportation funding.” And the story in last week’s paper was similar: “A tougher crowd waits in Olympia.” The truth is that the governor has introduced a bold plan that faces a very steep uphill battle in the legislature, especially the Republican-controlled state Senate. 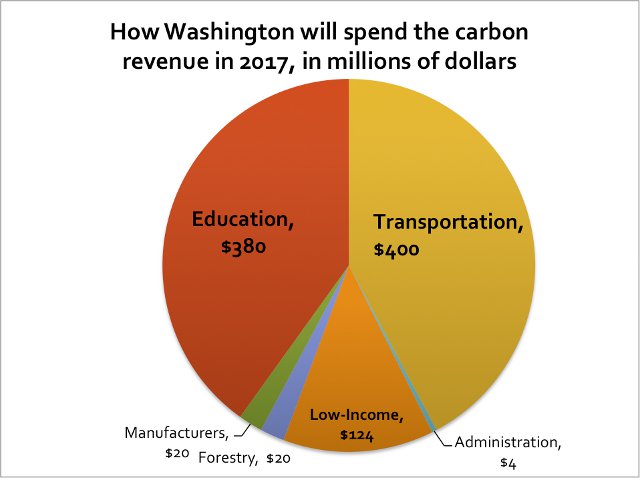 “Tax” versus “Fee” versus “Revenue”. Discussion of the governor’s proposal will be a good test-case for looking at the kind of language that gets used in public discussion. The governor is steering away from calling his proposal a tax (or even a cap-and-trade system) but the public discussion may go elsewhere; for an extreme example see the San Juan Islander, which flat-out calls it a “carbon tax”. Polling suggests that language differences may not matter all that much anyway—the recent G-Squared poll has carbon tax outpolling cap-and-trade—but in any case the weeks ahead will be instructive for learning about who gets to determine what language gets used and how much it matters.

The House Democratic caucus in Washington State supported Democrat Matt Larson over Darcy Burner in the 5th LD primary for House seat position #2.  Darcy is a strong progressive. She worked in D.C. as Executive Director of Progressive Congress and has a big following. The Democratic Caucus contributed $50,000 to Matt Larson. Later, after Darcy […]