Many political cartoons have a little guy on the bottom corner making snarky comments.    Chris Tombrello and Chad Lupkes suggested that Pat Oliphant may have invented this form [snarky comment guy]. His little penguin was named Punk. Chris thought the insets might be called “cartouches”, but the term doesn’t quite fit. (See http://oldprintgallery.wordpress.com/tag/cartouche/ and http://en.wikipedia.org/wiki/Cartouche_%28disambiguation%29 .)

I added a snarky to the bottom left of my image about Bill Gates, in response to Elizabeth Hanson’s observation that Gates’ donations to education often supported a corporate takeover of public education. 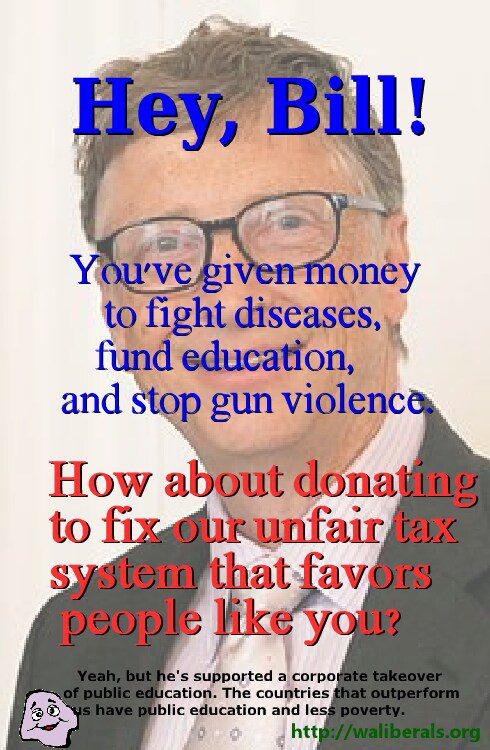 Message from Anon: the 99% Demand Justice and Fair Taxation

This is somewhat over the top and disturbing — and it may involve illegal disruption of Internet traffic — but the righteous anger at the corruption and injustice of our political system is justified. From http://www.youtube.com/user/TheAnonMessage. Comments comments

MoveToAmend announces: You are invited to attend a WAmend sponsored community forum on “Creating Democracy and Challenging Corporate Rule.” The event will be held at 7:00 PM on Saturday, September 28, at the University Temple United Methodist Church, 1415 NE 43rd (just west of the UW campus) in Seattle. The evening will kick off with […]