I just heard the news that yet another progressive voice will be leaving the US media due to lack of financial support: The Norman Goldman Show is ceasing operations as of Feb 22nd. I have been a regular contributor/guest on the show for several years and Norm has been one of my mentors.

I’m getting very tired of watching as talented and well informed people leave the airwaves or their online programs due to lack of support and sponsorship, while fake conservative pundits continue to be bankrolled by Clear Channel (iHeartMedia) , Cumulus, Fox, etc. and their advertisers.

When will progressive investors finally get a clue and begin to support forward thinking shows? Where are the green economy advertisers and investors? Why is it that only very “mainstream” and corporate voices, or radical right-wing talkers get to monopolize media in the United States? Where is the balance?

We saw Mike Malloy, Randi Rhodes, Nicole Sandler, Norman Goldman, Ron Reagan, Jr., Sam Seder, Janeane Garofalo, Al Franken, Stephanie Miller, Thom Hartmann, Ed Schultz, Rachel Maddow and dozens of other progressive media personalities kicked off the air during major corporate media takeovers. Meanwhile, I testified before the Federal Communications Commission about the negative effects of corporate media ownership consolidation to no avail. Conservatives on the commission have given the big media companies almost everything they’ve asked for while ignoring most community and public broadcasters. And although a few of the broadcasters were later able to find gigs on television or radio, most have languished in relative obscurity broadcasting online from their homes. Most failed to get paying gigs – not due to lack of talent or experience, but simply because the networks didn’t want them. Instead, we saw a proliferation of embarrassing right-wing media shock jocks like Rush Limbaugh and Glen Beck take over the airwaves, financed by Clear Channel, Fox and major corporate advertisers.
https://www.vanityfair.com/news/2009/03/what-ever-happened-to-air-america

When will the madness end? Neither Portland or Seattle have progressive commercial radio stations anymore despite a HUGE audience waiting for someone to speak their language. A great business opportunity is being ignored. This makes no sense to me…

There are plenty of “left of center” billionaires out there, including Tom Steyer but I and folks like talk show host Jeff Santos (I’m a weekly guest on his show) have approached Steyer and he would rather spend his money trying to impeach Trump or running for US President. One wealthy donor could launch an entire network but nobody seems willing to do it.

Isn’t it very obvious that progressive media networks like Nova and Air America helped get Barack Obama elected? They were very effective in getting out the vote, etc. Why is that not clear to everyone on the progressive side of the political spectrum? I love small community broadcasting stations like KBCS near Seattle, but they are not enough to counter the behemoth corporate media monopolies. There is a solution if folks would just band together and do it!

I would love to have my own radio/TV show talking progressive politics. But where would I find a network that supports me even in so-called “progressive” Seattle?

Portland listeners were able to create the low power FM station Xray.fm, but in Seattle the Progressive Radio Northwest group were set on purchasing a radio station at the cost of 5 or 6 million dollars. Needless to say, that never happened…

And what’s really frustrating about the situation is that there is a new progressive trend in US politics represented by folks like Alexandra Ocasio-Cortes and Bernie Sanders but the US media does not reflect that.

Some folks like Hartmann and Lee Camp were so desperate they went to RT! Not a good choice, however…

Eventually Hartmann purchased his own program and resigned from his RT show. I am also an occasional guest contributor to Thom’s show.

I suppose Democracy Watch News might be able to fill in some of the gaps but we are also in need funding support.

Democracy Watch News is a non-profit news organization that was chosen by Onalytica as one of the top 100 digital media influencers in the world but we still struggle to finance operations. I am currently Executive Director. We have a podcast called “Democracycast” which is available on Libsyn, iTunes, Stitcher, etc. 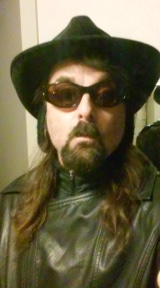 On the way to work yesterday, a young (drunk) guy and his girlfriend got on the bus, after putting their bicycles on the bike rack next to mine.  When the young guy heard me discussing politics with the bus driver, he said, “Well, we oughta half the size of government, ’cause the politicians are screwing […]

David Horsey, who moved from the Seattle P-I to the LA Times at the beginning of this year, is getting high profile notice.  His cartoon and article about Limbaugh freaks as Romney lays claim to Obama’s bailout was shown at the very top of the list of articles at http://news.google.com. Horsey is intelligent and progressive.   […]