Last night there was a showing of Rick Steve’s The Story of Fascism in Europe. 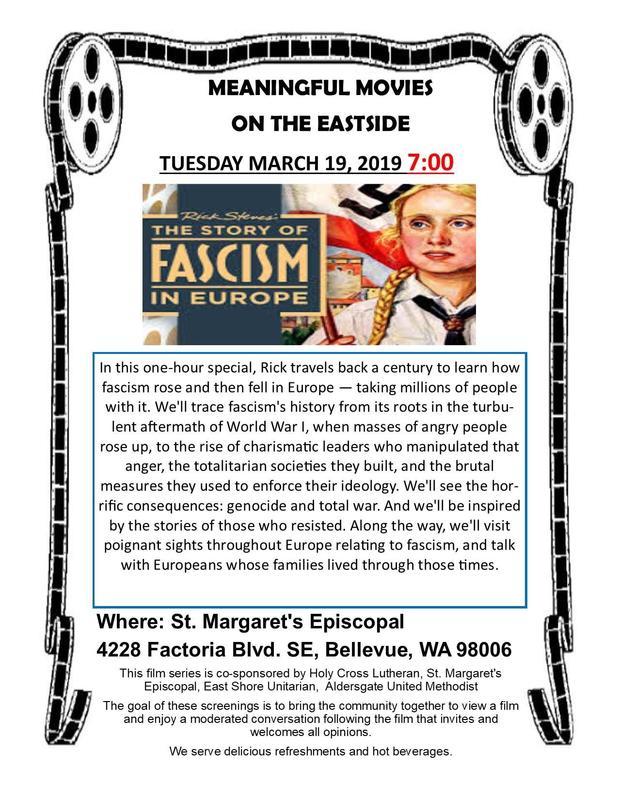 There was a big turnout, about 40 people, which the organizers said was the largest they’ve had for a film. The film blamed the rise of fascism on desperate people deceived by charismatic leaders (Hitler, Mussolini, Franco) who offered simple answers to complex issues and who blamed minorities and outsiders (Jews, socialists, communists).  The leaders promised to restore their countries to lost greatness. The filmmakers interviewed scholars and tour guides in Europe, who told the history. There were lots of film clips from the first half of the 20th century, showing scenes from WWI (which left Europe desperate and in ruins), hungry people, the rise of Nazis, speeches by Hitler and Mussolini (quite the actor!), marching brownshirts, concentration camps, Nazi rallies, blitzkrieg attacks on Czechoslovakia and Poland, the occupation of France, bombing campaigns on German cities, D-Day, and the eventual defeat of Germany.

The film mentioned that the Great Depression increased the appeal of fascism because it made people more desperate.

The film ended with speculation about whether fascism could rise again — with the implication that it might be happening now. Germany was the pinnacle of civilization; it produced Beethoven, Goethe, Schiller, etc. If fascism could happen there, it could happen here.

After the film, there was discussion. People were asked if they think fascism is emerging here. A raise of hands suggests that most people thought so. People compared Trump’s treatment of immigrants, Muslims, and the media to how fascists treated their enemies and how Hitler blamed scapegoats.

Representatives from Refuse Fascism were in the audience and were explicit in their criticisms of the “Trump/Pence regime.” They called for peaceful protest in the streets. They said it’s risky to wait for 2020 in the hopes that Trump will lose. If he loses, it’s unclear if he’d accept the result of the election, someone said.

If there were any Trump supporters in the room, they kept silent because they were outnumbered.

When I spoke, I mentioned that the rise of right wing populism in America is perplexing now, because the economy has been booming (the expansion started under Obama). Though there is inequality, there is not widespread poverty as there was in Europe. So why the right wing populism?

The rise of right wing populism in Europe makes somewhat more sense, due to the large number of refugees fleeing violence in the Middle East (largely caused by U.S. meddling!) and due to higher unemployment in Europe.

A woman in the audience said that the source of the rage is white males feeling threatened by women and minorities. Trump was able to exploit and incite such rage and resentment.

Another source of the populist outrage in the U.S. is the extreme divisions between conservatives and liberals. (Said divisions are apparent on nextdoor.com, where I first posted this review.) The divisions are fueled by the Koch brothers, other billionaires, and right wing media (Fox News, Breitbart, AM talk radio, etc), which incited anti-immigrant anger as a way to win votes. Fear of blacks, immigrants, Muslims, Catholics, Jews, the homeless, hippies, drug users, socialists, gays, and other minorities has been used by politicians for decades. Up til the 1960s, large chunks of the Democratic Party (Dixecrats) were racist. Starting with Nixon, the Republican Party has exploited racial animosities (Willie Horton, etc).

Aside from the economic prosperity we enjoy, another difference between us and 1920s Germany is that our democratic institutions are still functioning, more or less. The Democrats won control of the House of Representatives last year. Mueller’s investigation is at least partly effective at jailing wrongdoers (though it’s unclear whether he’ll be able to get Trump for collusion or obstruction of justice). The press is still free, though it’s struggling due to the Internet and the loss of ad revenue.

But it is disturbing that Trump’s appeals to racism, xenophobia, and name-calling (his insults against his GOP challengers, “Crooked Hillary”, etc) were successful. Lots of Republicans disliked Trump but voted for him to avoid what they regarded as the greater evil (Hillary). His promise to “Make America Great Again” is an eerie echo of the promises by fascist leaders last century. And it’s disturbing that people ignored the clear indications that Trump was unfit for office (his history of shady business dealings, the many lawsuits, the many allegations of sexual impropriety, his crude and uneducated speech, his birtherism, his denial of climate change, etc).  There has been an undeniable resurgence of neo-Nazi pamphleting and  rallying.

I suppose a fundamental question is: why couldn’t America’s political system offer better candidates than Trump and Hillary, both of whom were widely hated? Or, rather, why were they the nominees?

The party of dumb

The LA Times is reporting that, despite the overwhelming majority of the public who support tightening gun laws, the failure of Congress to pass gun control in the wake of Sandy Hook may, paradoxically help Republicans in future elections, because gun right supporters are more passionate about the issue. “Those who said they felt “very […]

An example of how Repugs want government to fail

Cities Are Teaming Up to Offer Broadband, and the FCC Is Mad City governments can offer Internet faster and cheaper than the private market can. Repugs hate this idea because it contradicts their deeply held dogmas. The same is true for health care: government-run systems in Europe are cheaper and have better outcomes. Comments comments