Salon: Even by Pentagon terms, this was a dud: The disastrous saga of the F-35

Esquire: This Country Is Spending $1.7 Trillion on Planes That Don’t Work  “For that money, we could have cancelled American student loan debt. All of it.”

Extreme Tech: The US Air Force Quietly Admits the F-35 Is a Failure

Program on Government Oversight:  Is the F-35 Program at a Crossroads? “As official support for the F-35 program wanes, the Pentagon’s largest weapon program is struggling to show it has the promised high-end capabilities for which taxpayers are paying a premium.”

The JSF program has long served as the poster child for defense procurement run amok. In development for nearly 18 years and more than eight years behind schedule, total acquisition costs now exceed $428 billion, nearly double the initial estimate of $233 billion. An April 22, 2019, Bloomberg article noted that the lifetime operation and maintenance costs of the most expensive weapon system in history will total approximately $1.2 trillion, or 20 percent more than the $1 trillion reported in April 2015 by the Government Accountability Office.

All signs point to the JSF’s troubles continuing unabated. There is a lack of incentive for Lockheed Martin to promptly address flaws in the program or face consequences. By earmarking beyond the amount requested by the Pentagon, legislators have inexplicably rewarded poor performance. Congress has to start holding the contractor’s feet to the fire or the delays and cost overruns in the F-35 program are likely to continue well into the future.

“Rep. Adam Smith of Washington state, the top Democrat on the House Armed Services Committee, verbalized the long-simmering frustration with the massive program’s costs and persistent technical problems when he said he wanted to “stop throwing money down that particular rathole. … Is there a way to not keep spending that much money for such a low capability?” (Source: NBC News: The Air Force admits the F-35 fighter jet costs too much. So it wants to spend even more.)

Then there’s the $6.4 trillion the U.S. spent in (disastrous) wars since 9/11, according to Brown Univ”s Costs of Wars project —  as well as the 810,000+ people killed and the 34 million people displaced from their homes.

In related news, Eli Clifton of Responsible Statecraft wrote this article about Weapons biz bankrolls experts pushing to extend Afghan War.  Likewise, NBC News reports:  Watchdog: Pentagon wasted millions on Italian planes later sold as scrap, no one held accountable.  The Pentagon has never passed an audit and the Pentagon Racks Up $35 Trillion in Accounting Changes in One Year.

Scientific American: It’s Time to Rein in Inflated Military Budget. “There are plenty of reasons to cut the Pentagon’s budget, but its track record of profligate spending is among the most obvious…. The Center for International Policy’s Sustainable Defense Task Force—a collection of former White House, congressional and Pentagon budget officials, ex-military officers, and think tank experts—published a report detailing how the Defense Department could cut $1.2 trillion in waste and inefficiency over the next decade. ”

Such problems are endemic to the military, and nobody is ever held accountable. The Pentagon Papers revealed that it was known for years that the Vietnam War was a hopeless cause, but Gen. Westmoreland and others continued to lie about it.    The Afghanistan Papers revealed similar info about the war in Afghanistan.     The war in Iraq was likewise a disaster, but there’s never been an accounting for it.

Now the U.S. is planning for war with Russia and China.   We got our asses whooped in Vietnam, Afghanistan, Iraq, and elsewhere.  But we’re picking a fight with a technologically advanced nation, China, that is four times our population, and we’re doing it in their backyard (the South China Sea), despite $28 trillion in debt.  How stupid is that?!

We have about 800 military bases overseas in over 70 countries. “[M]aintaining bases and troops overseas cost $85 to $100 billion in fiscal year 2014; the total with bases and troops in warzones is $160 to $200 billion.” And we’re still meddling in South American politics, in Venezuela, Bolivia, and Brazil, helping Bolsonaro get elected. The Trump administration, with support from Congress, started a race to militarize space and promoted the use of tactical nuclear weapons.  It tried to withdraw U.S. troops from Germany and Afghanistan, but faced bipartisan opposition in Congress. See House Democrats, Working With Liz Cheney, Restrict Trump’s Planned Withdrawal of Troops From Afghanistan and Germany.

How strange that the military remains the country’s most trusted institution (likewise). Many Americans almost worship soldiers and the military.

Don’t tell me the Pentagon can’t handle a 10% reduction in spending — something that was attempted in 2020 but was rejected in the House by all Republicans reps and by 139 out of 231 Democrats.  In Washington State only Reps Pramila Jayapal and Denny Heck voted to cut the Pentagon budget by 10%. 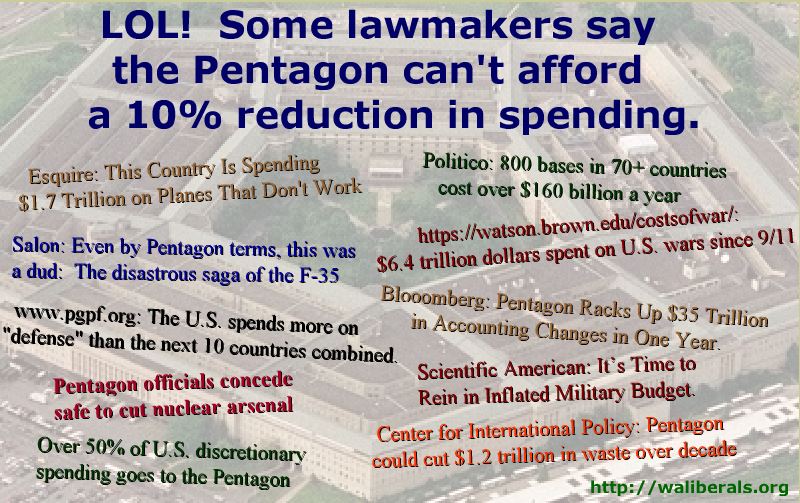 There are reports of police assault on the occupation of Wall Street.   The first amendment grants us the right to assemble and speak out.  It’s a shame that this country has so little tolerance for first amendment rights. I am reminded of the video I have seen from China when the military was streaming […]

Glen Anderson: Military “Solutions” Are Really the PROBLEM- a workshop given at Fellowship of Reconciliation of Oregon and Washington’ annual conference at Seabeck, July 4th 2015. Military ‘Solutions’ Are Really the PROBLEM. Choose humane, sustainable ways for TRUE Security. In our daily lives, we know better than to think violence solves problems, but at the […]