Despite losing disastrously in Vietnam, Afghanistan, and Iraq, the U.S. is actively preparing for war with China, a technologically advanced nation with four times our population.  And it’s planning to fight it in China’s own backyard: the South China Sea.

Donald Trump ramped up the racist rhetoric against China (“Chinese virus” and “Kung Flu”). But the anti-China propaganda and war mongering are continuing.

The Pentagon has published a series of bombastic, hawkish videos trumpeting military exercises in the South China Sea. Here’s one:

The film has rousing martial music, with beating drums. It shows military equipment and soldiers landing on islands — reminiscent of D-Day on Normandy Beach.

New York Times: How the Cold War Between China and U.S. Is Intensifying

“Exactly if and when the increasing antagonism between United States and China will boil over into full-on conflict remains anybody’s guess.” (Source: China’s navy has more ships than the US. Does that matter?.)

Time: How the U.S. Could Sleepwalk into a War with China

Hindustan Times: Red surge in the South China Sea: The battle that could define who wins the war

A New Tonkin Gulf Incident in the Making?  “Halt Trump’s rush to war in the Pacific.”

Risk of military conflict between US and China higher than ever, experts say

CNBC: Op-ed: The cold war between U.S. and China just got a lot hotter

Articles are emerging questioning claims about Chinese genocide against the Muslim Uighurs minority.

Consortium News: The ‘Independent’ Report Claiming Uyghur Genocide “It was brought to you by a sham university and neocon ideologues lobbying to punish China for U.S. interests, Ajit Singh reports.”

The Grayzone: China detaining millions of Uyghurs? Serious problems with claims by US-backed NGO and far-right researcher ‘led by God’ against Beijing/”

Some Uighurs had engaged in terrorist attacks against Chinese, and China took steps to stop them. So it’s odd to hear Americans criticize the Chinese for fighting terrorism, given the U.S. war on terrorism. I’m not saying the Chinese haven’t been abusive towards minorities or that they’re not mistreating Hong Kong. I’m saying that it’s likely that the claims of genocide are exaggerated, as usually happens when war drums are being beaten.

What I’m mostly saying is: the U.S. can’t afford to be the policeman of the world. We have $29 trillion in debt and have just spent trillions to deal with covid-19. We wasted about $6.4 trillion in (disastrous) wars since 9/11 — wars which killed at least 800,000 people and displaced 37 million people from their homes, according to Brown University’s Costs of Wars project.  News recently emerged that the F-35 fighter jet, for which we will pay over a trillion dollars, is a failure.  There are desperate unmet needs in the areas of climate change, student debt, infrastructure, and fixing our health care system. 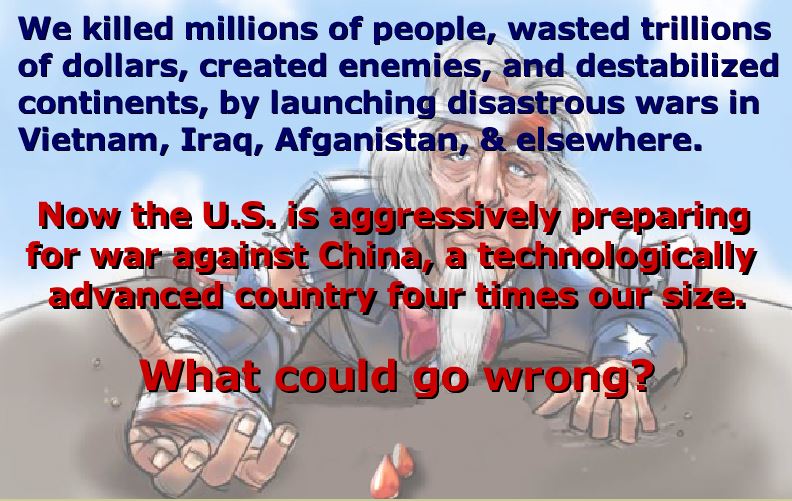 A Secret War in 120 Countries: The Pentagon’s New Power Elite

Imagining peace in Ukraine, with AI

The images below were generated by an AI program MidJourney, based on my prompts, shown at the bottom of the article. My aim was to get it to imagine a peace treaty between Biden and Putin that would bring an end to the horrible and risky war in Ukraine. They would be lauded as heroes […]