A friend emailed me:

On my driveway today was a ziplock bag with a melted Snickers bar and a leaflet that says, “KEEP AMERICA AMERICAN. REPORT ANY AND ALL ILLEGAL ALIENS THEY ARE NOT IMMIGRANTS THEY ARE CRIMINALS CALL 1-866-DHS-2ICE. BLOODANDSOIL.ORG Honestly, I am shaking and thoroughly disgusted that fascists are at work here. The phrase ‘Blood and Soil’ expresses a racist and nationalistic ideology originating in pre-Nazi Germany and is now used by white nationalists in this country. In my opinion it expresses ideas antithetical to our American experience and ideals. 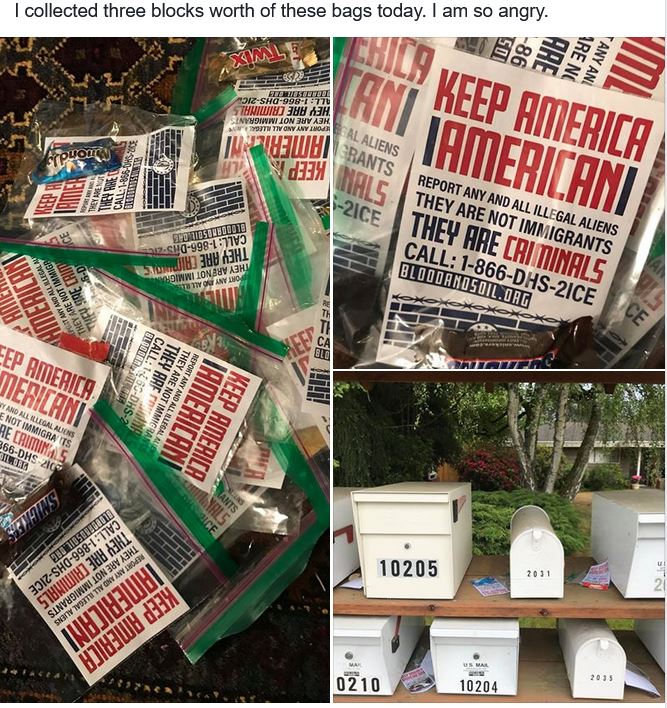 Someone on nextdoor.com reported that the Bellevue Police Department stopped two men who were distributing the leaflets. It’s unclear whether the police detained them or asked them to stop.  Even hate speech is protected under the First Amendment.

Someone else told me that it was Clyde Hill police, not Bellevue police, who stopped the people, who were driving an old green Ford and throwing the leaflets at houses and into bushes.

Someone pointed out that such racism is promoted by Tucker Carlson on Fox News:

Is any kind of meaningful democracy possible in a régime of secret law? — This is the question raised by the lead article in Sunday’s *New York Times*, which said that the FISA court “has quietly become almost a parallel Supreme Court, serving as the ultimate arbiter on surveillance issues and delivering opinions that will […]