Here are some links about how harmful (fossil fuel-powered) auto and truck traffic is to human health.  They also are a major contributor to green-house gas emissions and a major reason the U.S. goes to war so often.

Many daycare centers and schools are dangerously close to busy roads.
http://www.invw.org/series/exhausted-at-school/

“A new study finds many schoolchildren across the U.S. face toxic levels of air pollution in their classrooms, with low-income groups and students of color far more likely to be affected.” https://www.democracynow.org/2018/2/2/headlines/toxic_air_pollution_at_us_schools_most_impacts_students_of_color

Technical article about the effects of particulate pollution: The health effects of ambient PM2.5 and potential mechanisms

The UN Environment Organization says we have a right to clean air. https://www.unenvironment.org/news-and-stories/story/right-breathe-clean-air

“Several lawmakers in New Jersey want voters to add the right to clean air and water to the state Constitution, a move that supporters admit would create legal uncertainty for both government and industry.” (story)

The UK plans to ban new diesel and gasoline-powered vehicles in 2040, and China is considering a similar move: China looks at plans to ban petrol and diesel cars. In fact, “Chinese-owned carmaker Volvo said in July that all its new car models would have an electric motor from 2019.”

Samuel I. Schwartz’s Street Smart: the Rise of Cities and the Fall of Cars describes how American cities were transformed during the 20th century from pedestrian-friendly communities with sidewalks and  street cars (trolleys) to car-friendly cities with sprawl and traffic jams.

There are a few transit-friendly cities in the U.S.: New York, San Francisco, and Portland, Oregon, for example.  But most communities are very car-dependent. 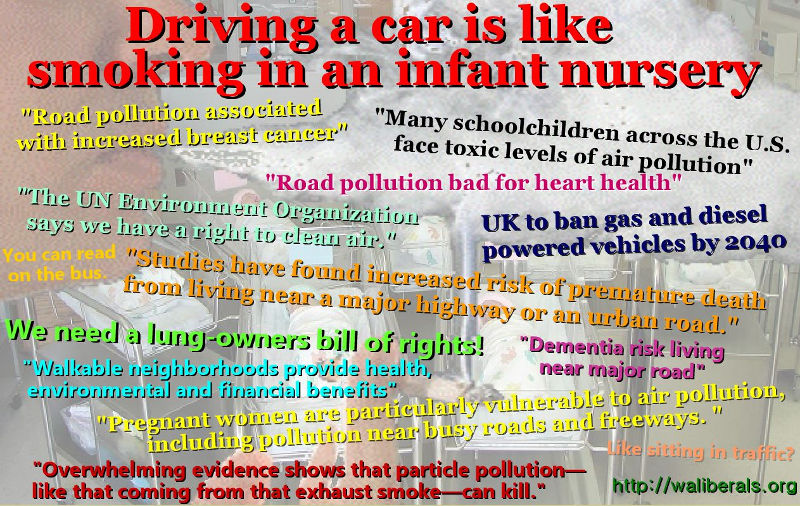 In Houston about 90% of people drive to work. The city is building a public transportation system that includes rail and buses. Over half the residents approve.

However there’s the other half, Houstonians who believe themselves under attack from anti-car zealots who want to turn the city into — horror of horrors — Portland. Vocal and powerful groups don’t just hate the existing rail system, but fight the expansion of it as if the train stations were porn shops in which plague-infected crack was being sold to schoolchildren. They dislike buses and loathe trains but they love, love, love their cars. These are the folks who chose to spend $2.8 billion, twice the cost of the entire METRORail system. on widening a 28-mile long segment of I-10 … from eight to — wait for it — twenty-six lanes.

Zurich, Switzerland has one of the most extensive and most economical, public transit systems in the world. “Virtually no one standing at any transit node, whether for streetcar, trolley bus, or motor bus, waits more than three minutes before a vehicle stops at it.” Moreover, it’s cheap: about $30 a month to use the entire system. The reason for the economical system is: it’s widely used. Only 26% of residents depend on cars. Fewer than half of households own a car.

Zurich’s successful transportation system is largely due to the decision to restrict parking, to discourage driving.  The plan worked.  See The High Cost of Free Parking.   Accordingly, many cities are rescinding costly requirements that new development provide parking places.   Said requirements represent a subsidy for drivers — a subsidy that even non-drivers must pay.  A substantial proportion of traffic in many cities consists of drivers looking for parking places.

Let there be a Lungowner’s Bill of Rights.

Added: Researchers Now Have Even More Proof That Air Pollution Can Cause Dementia

The Hidden Subsidy of Fossil Fuels “A new report says that the world subsidized fossil fuels by $5.2 trillion in just one year. But that calculation is less tidy than it seems.”

The reckless and rapid expansion of fossil fuel transport through the Pacific Northwest poses an unprecedented threat to this natural treasure and the safety of our communities. Natives and non-natives are uniting to meet this threat with beautiful resistance… To roll back these perilous misdeeds we need a vibrant movement that stirs our hearts, stokes […]

Five minutes and 20 seconds. Grab a cup of coffee and give Paul a listen. Paul and I agree on a lot of things, but we both start from the point that single issue activism is not going to get the work done. Paul is a Evergreen State College (TESC) alum, here is Paul’s website. […]