On facebook, in comments to articles, and in person I often hear  socialists, anarchists, and independents say things like “The Dems are as bad as the Republicans” and “Trying to fix the Democratic Party is a hopeless task.”

Such views represent a gross exaggeration or distortion of the facts, but they contain a kernel of truth.

Often the corporate Dems are progressive on social issues (such as women’s rights and gay rights).   And they’ll often voice progressive-sounding statements about economic inequality, labor rights, militarism, trade agreements, and environmentalism — especially when they’re running for office.  But when push comes to shove, the corporate Dems often end up voting with the Republicans to empower the 1% and the military-industrial-financial elite.

Too often, corporate Dems have gone along with the war-mongering of the Republicans. For example, for last week’s vote to approve President Obama’s request for funding to support Syrian rebels who will (it is hoped) fight ISIS, all Washington State House members but Rep. Jim McDermott voted Yea.

And the centrist Dems seem favorably inclined towards the Trans-Pacific Partnership, despite the state party’s platform which is clear that TPP should be opposed.

Still, even the corporate Dems are generally nowhere near as bad as the Republicans, who barely even pretend to care about issues such as the environment, labor rights, income inequality, women’s rights, and corporate socialism.

As of August 2013, House Republicans had voted 40 times to overturn Obamcare (ACA). 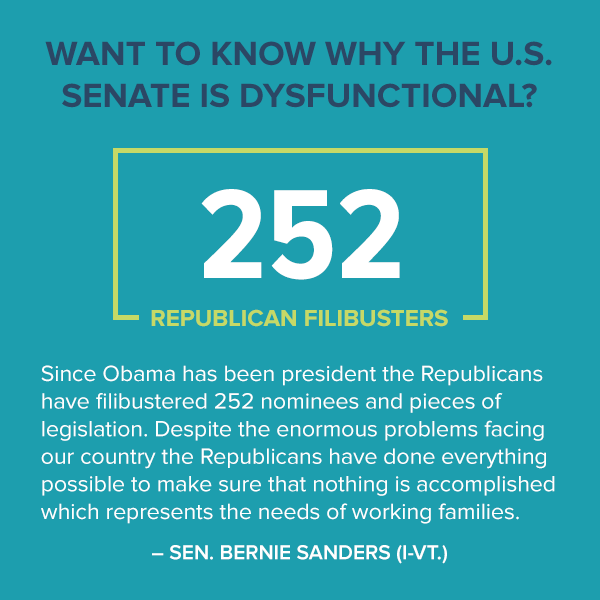 You can see visually how very different the Republicans are from the Democrats by visiting this article:  Visualized grouping of US Congress members by similarities in their voting record.   In fact, I modified the image to highlight the members of the Progressive Caucus in green: 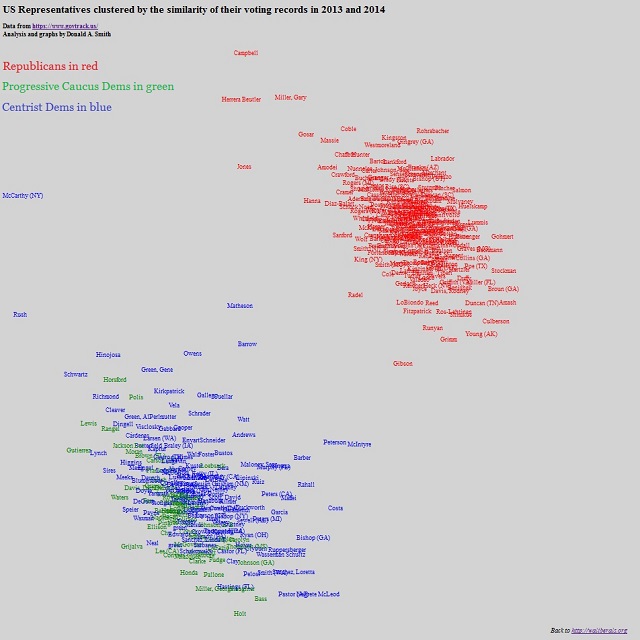 (The image suggests, by the way that representatives such as Hastings from Florida, Speier, and Neal may be closet progressives.  On the other hand, the graph may be skewed by votes on unimportant or procedural issues.)

Consider, too, the policies of Republican governors such as Scott Walker in Wisconsin, Rick Scott in Florida, Chris Christie in New Jersey, Rick Perry in Texas, and Rick Snyder in Michigan. They repeatedly have voted to cut taxes for the rich, decrease funding for education, and weaken labor rights.    Any notion that Democratic governors would have been as bad is totally delusional.

So, in short, people who say the Dems are the same as the Repugs are delusional, or dishonest, or both.

This is true both nationally and in Washington State, where the Democrats sorely need all the help they can get to win back the state senate from the Republicans.

In Washington State, the Republicans took over the state senate and blocked all sorts of progressive legislation from coming up for consideration. Republicans opposed the Reproductive Parity Act. They slashed funding for Metro Transit. They tried to weaken environmental regulations. They submitted bills to weaken collective bargaining rights and gut health benefits for workers.

In Washington State, bad Democrats include former Republican Rodney Tom and Tim Sheldon, who helped Republicans take over control of the state senate. Less corporate is Rep. Ross Hunter, who arranged for Microsoft to get huge tax breaks.

And Governor Inslee is guilty of arranging an $8.7 billion tax break for one of the richest corporations in America (Boeing), at a time when the State Supreme Court has ruled that the legislature is in contempt for failing to adequately fund education.

I acknowledge that there are bad Democrats. What I adamantly reject is any notion that the Dems in general are the same as the Republicans.

Despite his lofty campaign rhetoric, President Obama has often sided with Wall Street and the military.  As Obama said of himself, “My policies are so mainstream that if I had set the same policies … back in the 1980s, I would be considered a moderate Republican.”

So, for example, I fault President Obama with compromising too early and too often on health care reform, and with not allowing single-payer advocates a seat at the bargaining table. But even in the case of that very compromised law, it was the Republicans who demanded concessions and changes that weakened it.

Hillary Clinton is even more hawkish and Wall Street friendly than Obama. (Arguably, Tea Party populists such as Ron Paul are to the left of Obama and Hillary on the issues of militarism and Wall Street — at least in their rhetoric.)

But, as compromised as Obama and Hillary are, almost any Republican would be far worse. I am not proposing that we vote for “the lesser of two evils.”  I didn’t vote for Obama in 2012 (I voted for Jill Stein), and I oppose Hillary.  My point is that it’s plain wrong to say that the Dems are as bad as the Republicans.  Such rhetoric harms the causes we care about:  peace, economic justice,  share prosperity, public education, public health care, sufficient social services, worker rights, and environmental stewardship.

Another delusion that annoys me to no end is the fantasy common among anarchists that we can, in the foreseeable future, make do without any sort of strong central government. Unwittingly, anarchists are aiding Grover Norquist, the Koch Brothers, Ted Cruz and others in the Tea Party who want to dismantle Social Security, Medicare, public education, and the EPA. See Anarchism, Libertarianism and the way forward.

Socialists and anarchists, get real.  Stop trashing the Democratic Party in its totality.  The progressive wing sorely needs your help.

The nation is progressive!

Once again, our nation, which largely holds progressive values has not shown them at the ballot box. Our party’s message and messaging, campaign techniques, and ability to deliver on its (vague) promises must all be called into question. Exit polling done Tuesday revealed that even among the (largely GOP-favoring) voters “A stunning 64 percent said […]

Attend hearing on single-payer in Olympia on Friday

If you are driving to the state reorganization meeting in Olympia on Friday consider stopping by to show your support for single payer health care in WA. Call to Action! Support WHST-Fri. Feb 1st in Olympia!! Single Payer Health Care Bill-(HB) 1085 The most hopeful aspect of Obama’s Affordable Care Act is that it allows […]