But the last I heard both our US Senators, as well as Representatives DelBene, Smith, and Kilmer, have refused to state that they are opposed to (fast-tracking) the TPP.  On a MoveOn council phone call, I heard from activists that our Senators are supportive of TPP, while the Democratic reps are noncommittal.

Neither DelBene, Smith, nor Kilmer’s names are among the 150 signers of the letter to President Obama opposing fast tracking of TPP.

When, in person, I expressed to Rep. Suzan Delbene my opposition to TPP, she said that she is elected to represent all her constituents (and not just progressives).

Apparently, our lawmakers are listening to the interests of corporations such as Boeing and Microsoft which stand to benefit from the trade deal, despite its widespread disapproval by the Democratic grassroots. 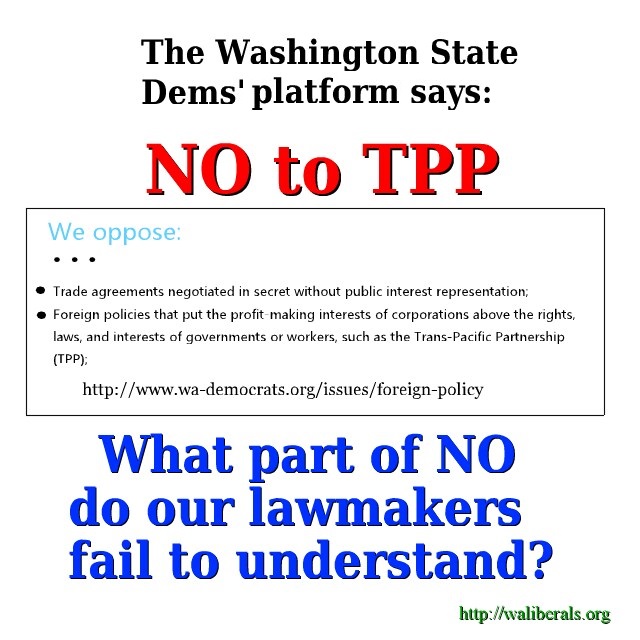 About the Cascadia Porject: Cascadia is the proposed name for the independent state that would be formed by British Columbia, Washington and Oregon, were these states and province ever to successfully secede from their federal governments in Ottawa and Washington D.C.  It is also a unique coastal-mountain bioregion between San Francisco and the Alaskan panhandle in […]

The Ball Is in the Legislature's Court

The Democrats have to make the case for raising taxes. Brendan Williams is a former state rep from the 22nd District, and an inconsolable left-winger. Successful government demands voter participation and holding elected officials accountable for their acts. This citizen responsibility cannot be abdicated in favor of gimmicks like requiring insurmountable votes to take legislative […]

One Reply to “The state Dems' platform says No to TPP. Will our lawmakers listen?”