As things stand, there is a good chance that Republicans will take control of the House of Representatives in 2022, thanks in large part to gerrymandering and to changes in election laws in Republican states.

Furthermore, the Republicans are laying the groundwork for stealing the presidential election in 2024, as described in The Atlantic,  The New York Times and elsewhere.

This leads me to propose the following:

The situation is dire and we need to be selective about expending time and efforts on other priorities. As in a game of chess, we may need to make some painful sacrifices, individually and communally.

For example, though I detest the policies of some hawkish, corporate Democrats, we may need to direct our efforts at holding onto the House rather than challenging said Democrats in primaries.  Certainly we shouldn’t challenge Democrats in swing districts unless they’re particularly horrible.

This next example is trickier. I deeply want Build Back Better to be signed into law, and passing it would help Democrats win in 2022 and 2024. But I think that protecting voting rights is a higher priority.  So, if I had to choose between passing Build Back Better and passing bills to protect voting rights (e.g., the John Lewis Voting Rights Advancement Act), I would choose the latter.   Ideally, we could pass both.

Joel Connelly, formerly a reporter for Seattle-PI, penned The Republicans are Coming, in which he blames progressive extremism and Democratic infighting for Republican gains in Virginia, Seattle, and elsewhere. He warns that Republicans may make a comeback in 2022 here in Washington State.

No matter who wins in 2024, there is likely to be civil unrest, especially if the election is close. The left needs to prepare for that outcome. Thing is … if progressive activists turn out in large numbers on the streets, they’ll be met with large contingents of (armed) right wing activists.  It is difficult to see how the country can be saved from disaster.

I think the root causes of our dilemma are: (1) money in politics, (2) our undemocratic system of government, especially the Senate, and (3) the powerful right wing media infrastructure that has managed to brainwash tens of millions of Americans.

Business Insider reports that Fringe factions of MAGA world are imploding after Trump publicly advocated for the COVID-19 vaccine.  Donald Trump was booed during a speech because he asked the audience to vaccinate. Conspiracy theorist and InfoWars talk-show host Alex Jones and the recently subpoenaed “Stop the Steal” organizer Ali Alexander have both condemned Trump’s stance.

Likewise, Republicans Liz Cheney and Adam Kinzinger are cooperating with Democrats to hold Trump accountable, via the House committee investigating the Jan 6 insurrection. The Atlantic had an article about anti-Trump Republicans who feel beleaguered but also say that in secret many Republicans wish that Trump would go away.

Even McConnell and Trump are quarreling.  ‘Doesn’t Have a Clue’: Trump Calls on Mitch McConnell to Resign as Senate Minority Leader

Thus, there’s a possibility that the GOP can be splintered.

The Jan 6 committee may find a smoking gun that will doom Trump.  The Attorney General of New York’s investigation of Trump is progressing, leading Trump to sue to stop it.

On the other hand, Trump is the Teflon Don, and hopes that the Mueller Report would doom Trump were dashed.   Furthermore, no matter what the Jan 6 committee and the NY Attorney General discover, it’s possible that GOP voters will continue to support him.

Another consideration is that Trump is so extreme that he’s probably unelectable — if the votes are fairly counted.   So, in one sense, Trump is good:  if a more competent autocratic politician than Trump took over the GOP, we might be in even more trouble.  Still, stopping Trump seems wise. The great mystery of our era is that so many Americans like the guy.

You’d think that some sensible billionaires would save us (as Ralph Nader imagined).    There are about 614 billionaires in America, and it would take only a few of them to make a real difference. They could pool their resources.

Perhaps we should all march in the streets near the homes of billionaires and beg them to save us. 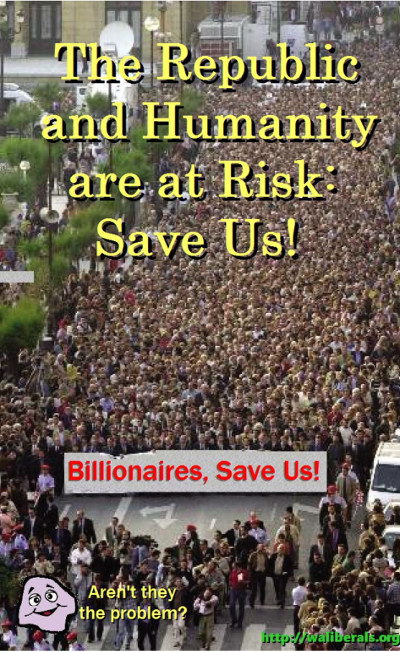 A few months ago, I published an article Blame Poverty, not Public Schools on OpEdNews.  A conservative (Bill Johnson) wrote a comment that I think is worth quoting. As I see it, a liberal is a socialist and most socialists are liberals. Both are democrats. Same thing. Same philosophy. And they wonder why conservatives don’t […]