A trio of informative, well-written articles has piqued my interest in the future of Bellevue and, specifically, in the questions of who will control the process and who will benefit.

None of the articles significantly addressed the role of Kemper Freeman. In addition to addressing his role, this essay discusses further desiderata for making Bellevue a world-class city and for making sure the benefits are shared with the public and small businesses.

Amazon’s second chance: Bellevue gives tech giant an opportunity to reshape its regional legacy describes the close cooperation between Amazon and Bellevue business and community leaders, as well as some of the challenges facing Bellevue, including traffic. It barely mentions homelessness and doesn’t mention crime.

Divided Between Progressives and Conservatives, Bellevue Mayoral Vote May Decide City’s Direction discusses the nearly even balance of power in Bellevue City Council between progressives and conservatives. The current mayor, Lynne Robinson, is a left-leaning centrist. Soon the council will select a new mayor. The author fears that it will be Jared Nieuwenhuis, one of the conservatives.

New Zoning of East Main Site in Bellevue May Create 1,500 Homes Near Light Rail describes the negotiations among city council members about setting rules for the transit-oriented development in downtown Bellevue.

“Last week, Bellevue City Council approved a Land Use Code Amendment (LUCA) to allow for increased building density on a 60-acre site to the east of the future East Main light rail station. The unceremonious nature of Council’s vote to approve the LUCA at its last meeting of the year belied its importance as the culmination of eight study sessions, a years-long public outreach process, and thousands of work hours from planning staff. The 60 acres represent a fraction of the station’s 15-minute walkshed, which continues to include single family zoning farther out.

Aside from Councilmember Lee repeatedly trying to give the developers exactly what they were asking for at every juncture, councilmembers understood their role in balancing the needs for public amenities while making sure regulations weren’t cumbersome to potential development. It’s therefore only natural that Council and staff are proud of the literal years of work that have been embedded into this process. However, it’s important to temper the city’s pride with a sober examination of the remaining work to be done. “

It’s important to understand who’s financing the city council races in Bellevue. If you click on the Independent Expenditures tab of the Public Disclosure Commission page for Jared Nieuwehus and you’ll see the $169k that the Eastside Business Alliance donated to keep him in office. The EBA is funded by real estate interests, Kemper Holdings, and Amazon: https://www.pdc.wa.gov/browse/campaign-explorer/committee?filer_id=BUSIPB%20004&election_year=2021. They funded other conservatives on the Bellevue City Council.

As a resident of Bellevue, I received numerous campaign fliers in the mail during the city council election race. One touted Jared Nieuwehus as “a progressive” — which is laughable. Obviously, the campaigners knew that I voted for Democrats in the primaries and targeted me with that deceptive ad.

The role of Kemper Freeman

The developer Kemper Freeman owns Bellevue Square and surrounding real estate. His family has for long been a powerful force in Bellevue. He has plans for building additional high-end mixed-used development, including a luxury hotel. You have to admit that he has done a good job of creating a vibrant — and profitable — shopping and entertainment area. In the interview Beyond Retail: Developing a Destination he describes the history of development and his plans for the future. He says that forward-looking city and commercial leaders made the wise choice years ago to push Bellevue to have world-class public schools. Young people may want to live and play in Capitol Hill in Seattle, he says; but when they have families, they want to move to the suburbs and have a swing set in the back yard. But they also want to shop and play. He acknowledges the challenging problem of traffic congestion near Bellevue Square. He says he works well with Amazon and other corporations. He said he was happy that profits have broken records; his various properties reinforce one another: they make a destination that people want to go to.

The new light rail station will be about four blocks from Bellevue Square. That might be too far to walk for many shoppers, especially due to the incline. (I am reminded of the film WALL-E: humans on the spaceship were all obese and had trouble moving.) Most suburbanites are car-dependent.

In addition to transportation,  two related, contentious issues that need to be addressed are affordable housing and homelessness.

My fear is that Kemper Freeman, other real-estate interests and the corporations will overwhelmingly dominate the decisions made on transportation, housing, and development of retail, hotels, restaurants, and entertainment.  There’s a lot of money at stake, and the public and small businesses need to make sure they see some benefits.

Everyone who works, plays, and lives in Bellevue has a shared interest in making Bellevue a pleasant place.

What will make Bellevue a world-class city?

There is a place for high-end retail, housing, and entertainment. They can be part of what makes Bellevue a fun place to live and play. The many high-tech employees coming to work in Bellevue will want good choices. Many of them, and their families, will patronize high-end shops.

Large employers such as Microsoft and Amazon want their employees to be happy and healthy. So there will be a market for services for the many employees living and moving to Bellevue. And the employers have motivation to work with the city to fund amenities. Already: Executive Constantine announces Amazon contribution that will help King County Parks add iconic Wilburton Trestle to regional trail connected to light rail.

The areas around light rail stations will become economically vibrant.

Microsoft and Amazon will benefit greatly from light rail, which was funded by taxpayers. So it is reasonable that they contribute back.  To be fair, they bring good paying jobs, and they weren’t granted tax breaks to move to Bellevue.  (Microsoft received specially carved state tax breaks that continue.) But my point is: everybody will benefit if Bellevue is a great city.

The area along Main Street in Old Bellevue, just west of Bellevue Way, is ideal in many ways: a mixture of locally owned (high-end) retail and eating establishments, close to Bellevue Downtown Park. Downtown Kirkland is similar. It has several blocks of dining and shopping establishments — plus Kirkland has Heritage Park and the marina on Lake Washington. Both Old Bellevue and downtown Kirkland have narrow streets, which calm traffic.

But it takes more to make a world-class city.

What makes cities like Paris, New York and London great is the presence of public spaces: parks, monuments, statues, other art, and gathering places, as well as a vibrant mixture of cultural and entertainment options, including sidewalk dining.

Wide sidewalks and public transportation are crucial. Nobody wants to walk, sit or breathe along a roadway with noisy, smelly traffic. How many years before all cars are electric?

The City of Bellevue has kicked off the process for a new pedestrian and bike corridor through Bellevue’s downtown. Officials envision a must-see urban experience like the High Line in New York City or the Riverwalk in San Antonio. The corridor would go from the waterfront park at Meydenbauer Bay through downtown and span Interstate 405 to connect downtown with the commercial area in Wilburton.

Bellevue Downtown Park, just north of Old Bellevue, is good but not large. Downtown Bellevue east of Bellevue Way is mostly office buildings and condos, with a few restaurants and a theater. There’s shopping several blocks south. Residential areas are surround the city core to the north, south, and west.   Bellevue Public Library is good, and there is a small green area just to its west. Bellevue Botanical Garden and Willburton Hill Park are great, but they’re too far from downtown Bellevue to be accessible on foot, and you’d have to cross busy, smelly I-405.  (Can frequent bus service help?) There are no parks and few if any green spaces between Bellevue Way and I-405. Also, there are no parks that I know of in the Bel-Red area other than Bellevue Highlands Park, near 140th Ave.

Services and shops would grow organically, via market demand. That doesn’t mean that smart people in both the public and private sector shouldn’t do some planning so that the result is more beneficial to everyone. There are better and worse ways to grow a city.

A city should be built for people, not just cars. We don’t want ugly strip malls and wide streets with no sidewalks.  Areas like Factoria and 148th Ave near N.E. 20th St are fine for shopping, but they’re not places you want to spend much time. Traffic is bad.   Consider how horrible traffic in Issaquah on weekends.

A pleasant city is walkable, with parks and other public amenities such as art — as well as various retail, food and entertainment opportunities. The area near Bellevue Square seems destined to target high end establishments. Perhaps the areas near Bel-Red Road, including the Spring District, can be of a different, less pricey nature. It’s hard to imagine rock, hip-hop and jazz clubs thriving in downtown Bellevue, because the real estate costs will be too high.

Transit oriented development of the Spring District will include Global Innovation Exchange, a planned educational institute formed from a partnership between the University of Washington, Microsoft and Tsinghua University.” (source)

Efforts to develop arts on the eastside include PACE (formerly called Tateuchi Center), at the corner of 106th Ave and 10th St in downtown Bellevue, on land donated by the Kemper Freeman family. “As well as offering a venue for established and traditional performing arts group’s programming, PACE’s venues will provide opportunities for emerging artists and smaller arts groups to create and deliver new experiences for tomorrow’s audiences.” (source).

People who have good jobs and homes in Bellevue are blessed to be living in such an affluent area, with employers such as Microsoft, Amazon, Google, Facebook, T-Mobile, and Boeing, and with good schools and tree-lined streets. To make Bellevue world-class, the city must address transportation, housing, parks, public spaces, walkability, and night life.

Perhaps there can be blocks of the city, near light rail, that are off-limits to cars.

Will Bellevue be a place we actually want to spend time?

Note: see Comprehensive Plan: City of Bellevue for discussion relevant to many of the issues raised in this essay. 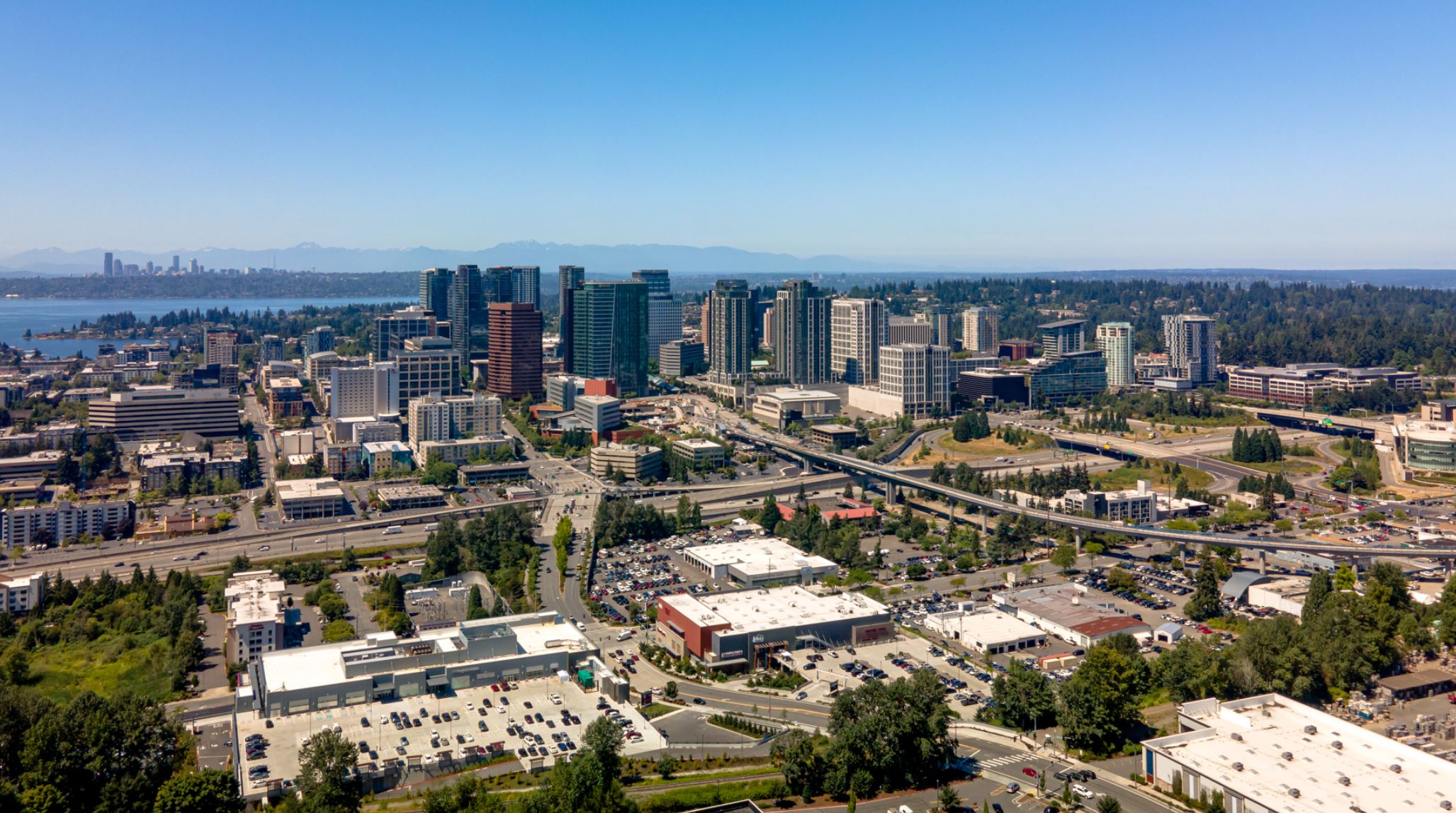 We are underway in the WA State capitol city with an occupation that started back in the spring when we had a week of action to challenge the legislature to close loopholes and raise revenue instead of cutting essential services. The state has so far been unable and/or unwilling to challenge initiative-based mandates that hamstring […]

3 Replies to “Changes are coming to Bellevue. Who will control them? Who will benefit?”