There was an overflowing crowd at Tuesday night’s Transportation Forum in Bellevue, organized by the “Majority Coalition.”

Senators Curtis King, Tracey Eide, and Rodney Tom officiated, with numerous other public officials in attendance, including Senator Steve Litzow, Rep. Larry Springer, Rep. Ross Hunter, and Rep. Tanna Senn. Many politicians testified, including King County Chair Dow Constantine and local mayors and council members.    A large number of business people in snazzy dark suits showed up; many of them were from the Chambers of Commerce and supported expansion of I-405 or 520 in Redmond.  Men from the Kemper Freeman-associated Eastside Transportation Association spoke, as did Labor representatives and ordinary citizens.

The event began at 6:00 PM and attendees reported having to deal with heavy traffic. One guy said it took 45 minutes to go from Kirkland to 8th St in Bellevue. I-405 going south is like a parking lot weekday afternoons starting about 3:30PM til about 6:30PM.

The first half hour or so was spent on introductory talks by WSDOT officials.

The rest of the three hours consisted of testimony from public officials and the public. Almost everyone who spoke, including about a dozen local mayors and council members, asked the legislators to pass a transit package that keeps Washington moving, protects transit, reduces wait times on the roads, and aids businesses. Dozens of business people expressed the importance of keeping traffic moving on I-405 and 520; their companies can’t operate if employees and delivery trucks are stuck in traffic. Small businesses, as well as representatives of Boeing, Amazon, and Microsoft, were represented.    Several businessmen said they’d be quite happy seeing the gas tax raised 10 or 20 cents.

Jane Hague of the King County Council argued for increased transit funding and received applause. In the past she had been more conservative.  She had once planned to go along with Tim Eyman’s opposition to the congestion relief car fee but had a change of heart. She said the King County Metro has already cut 100 staff and saved $20,000,000.  Dow Constantine added that unions cut costs by $30,000,000.

A couple of blind people said they depend on buses.

One person said they hate to admit but they agree with Tim Eyman: let the people decide on taxes. The Senate, however, refused to pass the transportation bill that would have allowed “local option” funding, in which local constituencies could raise taxes to pay for transit.

The Kemper Freeman-associated men from the Eastside Transportation Association argued that expansion of I-405 is crucial.   They poo pooed public transit. They claimed that over 60% of state funding now goes to public transit, although it serves only a few percent of the rides.  Are they correct?  Are they including gas tax revenues?

One woman from Pierce County stood out because she said she’s poor and taxes would hurt her. She said that Pierce County officials said that bus service would need to be reduced if they cut funding for Pierce County Transit. But in the end, she claimed, they came up with the money. Afterwards, others said that, no, many routes were in fact cut and the added money came from sales tax. What’s the truth about Pierce County?

[State Rep. Cindy Ryu said in a facebook comment on this post: “Pierce Co. Transit: many routes were in fact significantly cut (35% of services is the number I recall; then another cut). Voters within the Pierce Co. Transit District voted down two ‘local options’. For the second, the District was slimmed down, but the ballot measure still did not pass.”]

One guy said that expanding roads would reduce pollution (due to less idling?).

I had wanted to give testimony but there was not enough time. (In order to testify, you needed to sign a form.  Nine pages of people people had signed up. Only about half spoke.  The sign-up form included a check box for whether or not you support more revenue and a check box for whether you support “reform” — a loaded term, since the Majority Coalition’s proposed “reforms” involve weakening environmental regulations, transferring tax revenue from the general fund to transportation, and lowering wages for workers.)

In my testimony I wanted to express my support for carbon taxes (including the gas tax), as a way to nudge people into more efficient cars and onto public transit, carpools, and bikes.   But I planned to acknowledge the regressiveness of the gas tax.   In fact, I planned to say, Washington State has the most regressive taxes in the nation, and fixing that would provide money for transportation, as well as for education and other needs.  I also wanted to point out the terrible health and environmental damage from cars.  Driving a gas-powered car is like smoking in an infant nursery. I live not far from I-405 and have to deal with the pollution. I also have to breathe car fumes as I wait for the bus every morning.  America’s unsustainable car culture makes our communities filthy, noisy, ugly, and unwalkable. It also causes global warming and corrupts our foreign policy.

Additional forums will be held around the state, as described here, starting with a forum in Everett tomorrow (Sept 18).

If you want to testify, get there early!!

The Majority Coalition is accepting online comments at http://senatetranspofeedbackforum.org/.

Katie Wilson of the Transit Rider’s Union told the senators, “With all due respect, it was irresponsible for you to not pass a transit option.”

Members of the Transit Riders Union presented to Senator Rodney a “Grievance Bus” bus loaded with petitions critical of the Majority Coalition’s actions.

Get on the Grievance Bus 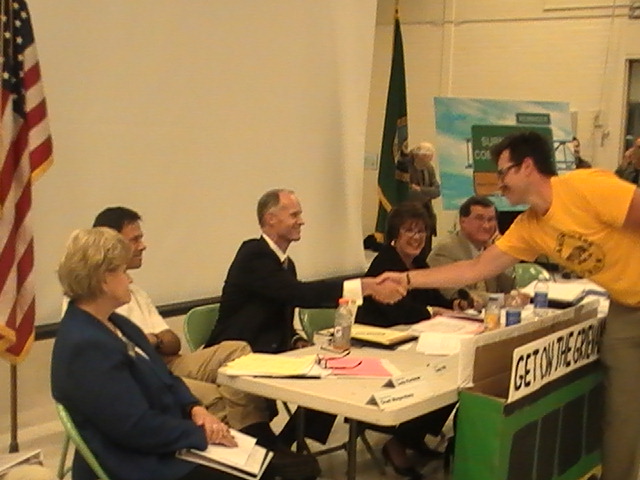 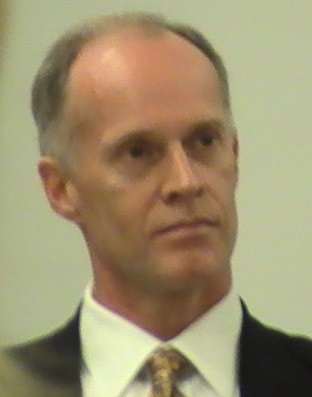 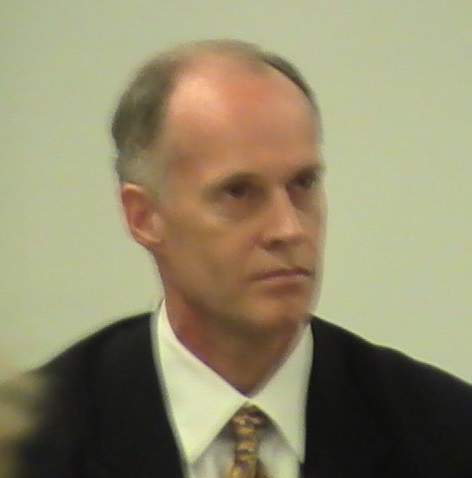 Why We Need To Restore Tax Fairness to Restore School Funding

Recently, both the House and Senate have proposed “band-aid” budgets that ignore a direct order from the Washington Supreme Court to fully fund public schools. Both budgets also ignore the will of the voters to lower class sizes. Both budgets continue to give away billions in tax breaks to billionaires while depriving our state’s one […]

4 Replies to “The "Majority Coalition" hearing on transportation, in Bellevue”