Ericksen caught covid-19 on a trip to El Salvador, where he was unable to get treatment.

This is sad but also ironic, since Ericksen had strongly denounced Gov. Inslee’s covid-19 mandates and restrictions.

As of Dec. 19, 2021, his webpage https://dougericksen.src.wastateleg.org/news/ still shows:

Inslee is only governor to fire unvaccinated workers – other states breathe free “We don’t need to live like this,” Ericksen says. “49 other states do not. Jay is out of touch. He should resign.” Nearly 2,000 unvaccinated state employees fired Proposed state regulation could extend vaccine mandate to private…

Note: The following op-ed was distributed to media outlets throughout Washington state on Oct. 21, 2021. By Sen. Doug Ericksen [670 words] As the COVID pandemic winds down and the rest of our country returns to life as normal, Washington state has emerged as a leader in oppression. Nearly 2,000…

Ericksen was much disliked by progressive activists, for his support for fossil fuel industries. For example, from 2013:

Ericksen was appointed by the Trump administration to help dismantle the EPA. 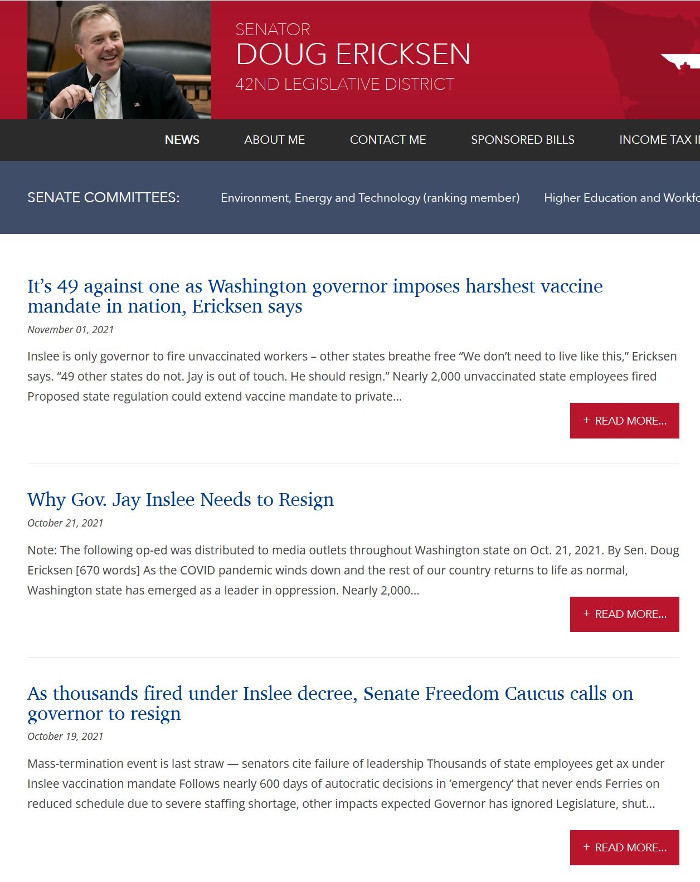 Submitted by Martha Koester, PhD, Board Member, Health Care for All – Washington I currently reside in the 34th legislative district, and I advocate that the state legislature pass HB 1085/SB 5224 to implement single payer health care in Washington State. Laws and budgets reflect our moral values as citizens. Our civic values are rooted […]

My Inbox is filled with outraged emails from advocacy groups concerned about the President’s plan to cut Social Security. The government spends trillions of dollars on corrupt, immoral, disastrous wars; on bailouts for the very banks that crashed the economy; and on tax breaks and subsidies for corporations.   It is unacceptable that they want to […]

Last week, Bush was forced to cancel a fundraising appearance in Toronto, Canada at Tyndale University College and Seminary, an evangelical Christian school. Students and faculty members protested and petitioned to keep him away from their school. Their petition said: “We believe that no amount of new money can justify profiting from a former figurehead […]