Ezra Klein in the New York Times wrote an article reviewing the work of political consultant and pollster David Shor, who said that the Democrats need to tone down their support for minority (black) rights if they want to win back white voters, whose motivations may or not be based on racism.  Klein writes:

All this comes down to a simple prescription: Democrats should do a lot of polling to figure out which of their views are popular and which are not popular, and then they should talk about the popular stuff and shut up about the unpopular stuff. “Traditional diversity and inclusion is super important, but polling is one of the only tools we have to step outside of ourselves and see what the median voter actually thinks,” Shor said. This theory is often short-handed as “popularism.” It doesn’t sound as if it would be particularly controversial.

A good response to Shor is in this NY Times piece by Spencer Bokat-Lindell:  Democrats Are in Peril. Can They Talk Themselves Out of It?.  It includes:

Popularism overestimates the importance of Democratic Party messaging: “It’s almost laughable to me the notion that what people think about Democrats is made out of what Democrats think,” Anat Shenker-Osorio, the founder of the progressive firm ASO Communications, told Klein. “I wish we lived in that world. I’d probably be on vacation. But that’s not our world.”

As the journalist David Roberts points out, whatever messages the Democratic Party might wish to send to voters get filtered through a right-wing media ecosystem that is “specifically designed to make Democrats look horrible.”

You might say, “nobody should have ever said defund the police.” How would you enforce that? But whatever, OK, fine. Nobody ever said “ban cows.” But guess what? That’s what every single con — & I bet quite a few normies as well — think Dems want to do!

In short, blame the Republicans, not the woke progressives for the outcome of the recent election losses.  The Rs have a too effective messaging machine which is able to make Dems look bad. I agree  that the slogan “Defund the Police” was dumb. (Try “Reform the Police,” for example.) But hundreds of things that Trump and Rs said and do are dumber and more destructive.  The real problem is that the Dems have a less effective messaging ecosystem than do the Rs.

When I shared the Bokat-Lindell article on an Indivisible facebook page, I was attacked for being insufficiently woke.  I said that I definitely think Dems should work for protecting minority rights and for overcoming racism, but Dems need to be careful how they message it. I said Dems should emphasize other issues (such as economic inequality) as well.

It’s a core concept of political campaigns that in order to win you should stay “on message” and not let your opponents draw you into losing arguments.  But almost every commenter on my Indivisible post disagreed strongly with what I wrote. The moderators later posted a comment saying that they decided to leave my (supposedly racist or unwoke) posting on the page because it led to useful discussion and because I have the freedom of speech, but they made it clear that they strongly disagree with what I posted and that their policy is to continue to support the approach favored by the black activists.

The response by Indivisible was odd, because the Bokat-Lindell article was a lot more progressive in its message than Shor’s: it said: blame the Rs, not progressives. It just called for staying on message.

The dismissive and condescending response by Indivisible was the sort of thing that almost makes me want to give up on political activism. Their response reminds me of a (copyrighted) political cartoon from the Pittsburgh Post-Gazette. It shows a Democratic donkey with his finger in the air, lecturing a white couple: “America is systematically racist, sexist, homophobic, patriarchal, exploitative, oppressive, and toxic to the environment!”  The couple turns away, and the husband, who is holding a toddler, looks over his shoulder and says to the donkey, “We’ll probably vote Republican.”  The donkey looks hurt and shocked. “Oh, was it something I said?”

That cartoon skillfully expresses the feeling I got from reading the Indivisible comments.  Why are they so stubborn and holier-than-thou?

Earlier I had had tried to persuade Seattle Indivisible activists to drop support for the phrase “Defund the Police.” I suggested “Reform the Police.” But they insisted that we follow the language preferred by black activists.

There’s some truth in what James Carville told Judy Woodruff: “What went wrong is this stupid wokeness. Don’t just look at Virginia and New Jersey. Look at Long Island, look at Buffalo, look at Minneapolis, even look at Seattle, Wash. I mean, this defund the police lunacy, this take Abraham Lincoln’s name off of schools.”

I’m no fan of Jimmy Dore, because of his crudeness and extremism, but he makes some good points at the start of this video, when he points out that Terry McCauliffe was a corporate Democrat, and so progressives shouldn’t get the blame for the loss. 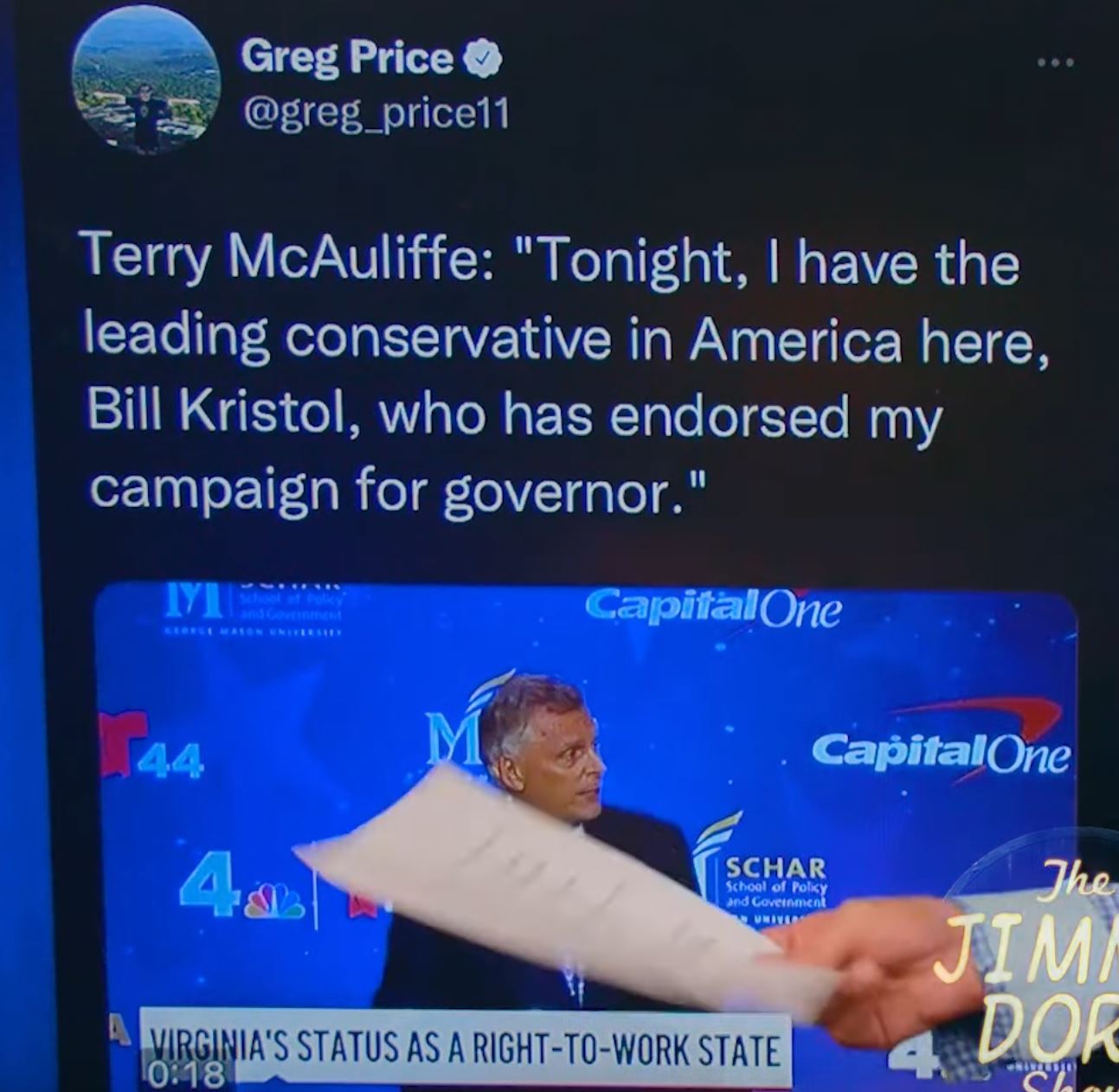 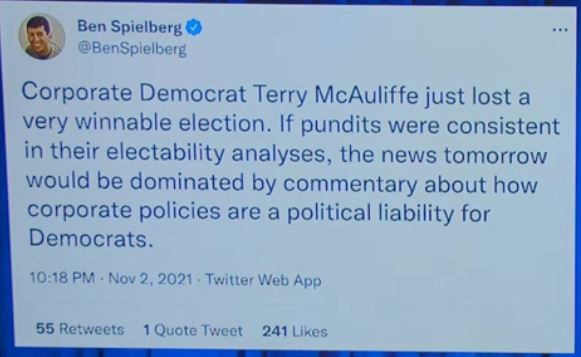 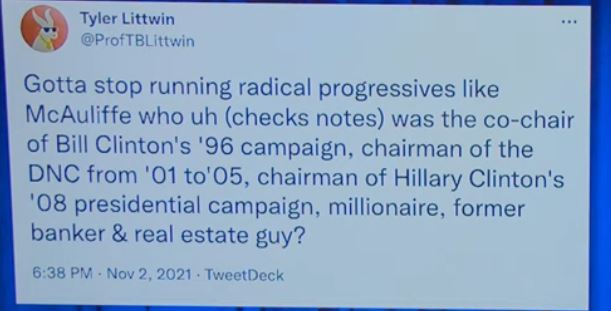 That’s a reasonable response, but it might be overly optimistic. It’s possible that the Republican Noise Machine has been so effective at brainwashing voters that the voters actually believe the Dems are radical socialists. False consciousness is common. And it’s not just whites. Many blacks and Hispanics are culturally conservative. Support for Trump increased among blacks and Hispanics between 2016 and 2020.  It’s well-known that more educated voters and wealthier voters lean Democratic. Many less educated whites vote Republican, against their own self-interest, it seems.

I like Bernie Sander’s approach: stay on message about economic inequality. That’s the best way to unite the black and white working classes to take back America from the neoliberals currently running the country.

Indeed, the New York Times’ daily email to subscribers had a long discussion of Commonsense Solidarity: How a Working-Class Coalition Can Be Built, and Maintained from The Jacobin. The gist was that messaging based on economic progressive populism polled higher than any other approach, including “wokeism.” But it said that even progressive populism is no panacea for building a winning coalition. 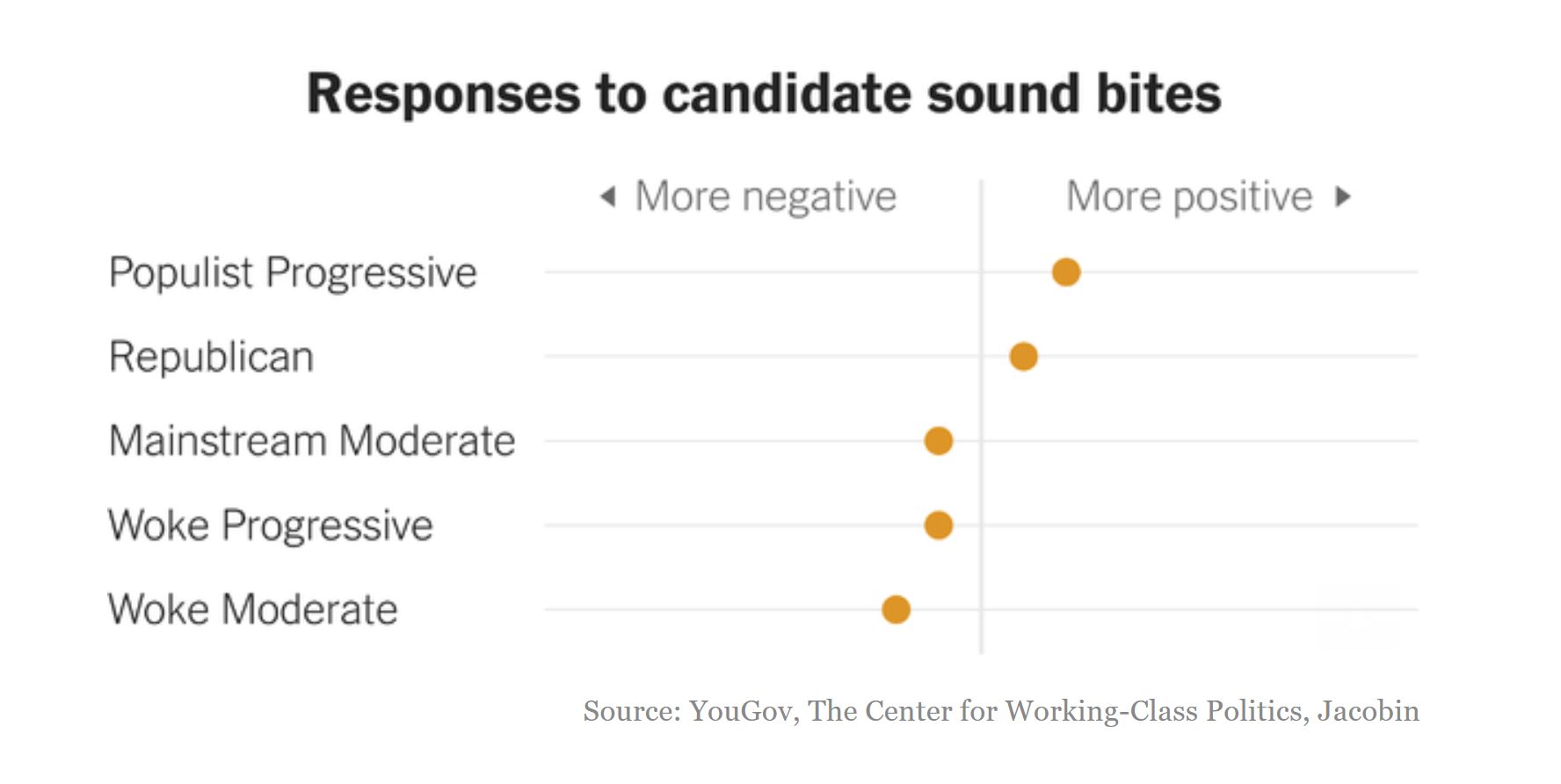 Petition by progressives in support of Texas Seceding from the USA

Whereas, More than 100,000 people have signed the right wing Petition For a Free and Independent Texas ; Whereas, At least half a dozen groups in Texas have been promoting the secession effort; Whereas, Texas politicians such as George W. Bush and Rick Perry have done great damage to our nation; Whereas, Texas has 38 […]

Poll: Were progressives who fell for Obama in 2008 foolish?

Many progressives who voted for Barack Obama in 2008 are now angry. They feel cheated and betrayed. They feel that President Obama failed to even try to live up to his promise to bring real change to Washington, D.C. President Barack Obama by public But some critics of progressives say that anyone who was taken […]

The commons: the case of cars and public transportation

Someone from France told me she found it incredible that many American streets lack sidewalks. Here many communities are built for cars, not people.  This is especially true of suburbs, where pedestrian traffic is at risk from speeding vehicles. In much of Europe people promenade through the streets in the evening, and people shop at […]