When you have to make hard medical decisions, who do you want in the room?

Religious belief is on the decline in the U.S., and medical knowledge is on the increase. This makes it particularly ironic that so much of our health care system is accountable at the highest levels not to science or patient preference but to the dictates faith and of theology. Metaphorically, more and more medical decisions get made with the Catholic Bishops in the room, regardless of whether the patient wants them there. Not only that, but the Bishops have a religious veto that can trump both doctor and patient. 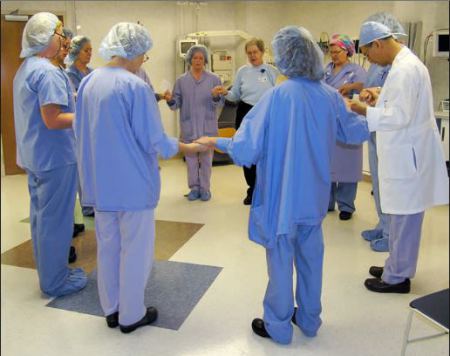 James Glickman from Sturbridge, Massachusetts, became a legal witness for aid in dying after watching his father scream for someone to kill him during his last forty-five minutes of life. Darcy Burner chose to end a pregnancy that would have killed her, and then advocated for patient rights during a congressional run. Judy Nicastro risked the life of one twin in utero to abort the other who would have painfully suffocated at birth. Each of these individuals, together with loved ones, wrestled with some of the most difficult decisions any of us can face. In all cases, the response of the Catholic Bishops would have been to deny them options—to fall back on the current position of the Church hierarchy: “we believe life is sacred from conception to natural death.”

Thanks to corporate mergers and laws that privilege religious institutions, many communities across the United States have few or no secular options when it comes to medical care and no legal mandate that patients be told about the full range of medically appropriate services. In Washington State, to cite one egregious example, almost half of hospital beds and affiliated care systems fall under the authority of the Catholic Church, and many counties have no alternative.

Let’s be clear why this creates an irreconcilable conflict of interest. A medical system with religious authorities and corporations at the top means the following:

The fact that religion has the final say in so much of our healthcare system is an artifact of history. Many early hospitals were built by missionary orders who believed that God called them to serve the poor and sick. They provided largely palliative care akin to what Mother Teresa’s order provides in Calcutta. As medicine advanced and government began funding health systems, it was often easiest to simply channel funding through the existing providers, even though these providers ultimately were accountable to Church authorities. It was a marriage of compassion and convenience.

Early on, there was no conflict between religion and medical science because the two were synonymous. Religion provided proto-scientific understandings of illness and death. The role of nurses was to ease suffering where they could and make spiritual meaning of it where they could not. When healing happened, the hand of God got the credit, and when healing failed, faith eased the loss.

However, conflict was inevitable. One part of the religious-medical mindset is compassionate service, but another part is passive acceptance of divine will. Consequently, over the centuries as medical science has emerged, first in the rudimentary trials and errors of folk practitioners and then as an actual scientific endeavor, institutional Christianity has had mixed reactions.

When push comes to shove, religion is designed to help us transcend our mortal condition in a world to come, not to help us overcome it in this one. Consequently, in religion-based healthcare the ultimate good is actually the health of the soul, as understood by a specific authoritarian tradition and set of practitioners. Suffering, in this view, may be a test, a punishment, or a way of cleansing sin. In any case trying to discern and obey God’s will is supremely important. Our lives belong to God.

Contrast this with the worldview of medical science—that human suffering is a natural phenomenon; that our experience in this world is controlled by physical and biological laws; that by understanding these laws we have the power to prevent illness and cure it or to limit suffering when both of those are impossible. In medical science, it is the health of the body and the quality of this life that matters, and our lives are our own. Medical ethics place a supreme value on patient autonomy and preference.

Sometimes the priorities of religious practitioners and the objectives of secular medicine align, but sometimes they don’t. In particular, the religious edicts controlling any given medical institution may clash with the moral, spiritual or physical priorities of a person seeking care. When that happens, who should get to decide? This question is being played out in the courts, with the big money coming from religious institutions. This illustrates the very heart of the problem with religion controlling healthcare, the ability of powerful institutions motivated by theology to impose their will on vulnerable individuals who simply need help or want to offer it.

Christians haven’t burned midwives as witches in a long time, but in the last century Christian clerics fought against polio vaccines (just as some conservative Muslims do today) because immunizing children was “playing God.” More recently, Christian authorities opposed HPV vaccines that prevent cervical cancer (as have conservative Jewish groups in Israel). Some perceive that sexually transmitted illnesses are divine punishment for unsanctioned sex and eliminating the threat of cancer might (God forbid!) increase promiscuity. Others see mandatory vaccination as an intrusion on divinely appointed hierarchy in which a man decides what is best for his own wife and children.

Today Catholic and Evangelical authorities are going all in to fight against universal access to contraception. Giving women the ability to delay, space and limit childbearing subverts God’s intention, which is, as the New Testament writer puts it, “women shall be saved through childbearing.”

The Church is also throwing weight and dollars into opposing aid in dying. Antibiotics and assistive technologies increasingly are removing some of the easiest ways to die of old age—pneumonia, for example. As baby boomers witness the drawn-out deaths of their parents, they increasingly are looking for ways to manage their own end of life experience. But Catholic theology and authorities insist that life is sacred, “from conception to natural death.”

Religion may not poison everything, as the late Christopher Hitchens alleged, but it does poison healthcare. And from there the poison seeps into society more broadly, because in order to maintain their privilege in the healthcare system, Churches and Religious corporations fight legal battles that undermine human rights in society at large. They have argued that the conscience rights of institutions and corporations should be able to trump individual conscience. They have challenged anti-discrimination laws, and won, effectively establishing legal precedent that freedom from discrimination is not a constitutional right. They have argued that they should be exempt from labor organizing because giving workers the right to organize impinges on their sovereignty. Driven by dogma, lawyers find circuitous arguments and judges uphold “rights” that under any other light would look patently immoral.

Compassion and justice, individual responsibility and freedom, health and wellbeing—values like these require that we constantly wrestle with hard questions. The values themselves may be timeless, even rooted in human biology, but our understanding of how best to enact them evolves as technology and population growth bring us into contact with new ideas and dilemmas. Our ancestors had no moral responsibility to cure malaria, for example, or maternal mortality, because they had no power to do so. Similarly, they had no responsibility to prevent birth defects, because they couldn’t know in advance whether a fetus can grow into a healthy baby. But now that we have this knowledge and power, a new set of ethical questions and moral complexities arises.

Biomedical science is presenting us with questions like these at a faster and faster pace, and they are precisely the kind of questions that religion is poorly equipped to answer. In fact, they are the kind of questions to which religion has given the wrong answer time and time again. Religion is inherently regressive. Religion takes a snapshot of a given cultural-moral nexus, sanctifies it, and then tries to defend it against all comers. Christianity puts God’s name on cultural agreements that were made in the Iron Age, long before medicine became a science. Small wonder, then, that some of the “Ethical and Religious Directives” that govern Catholic healthcare cause harm rather than helping people to flourish.

We need a medical system with one singular mission—to ensure everyone has affordable, easy access to effective care. To maximize the ability of American women, men, and children to live and die as well as we can. We need a system that respects our individual ideas about what that means, a system in which decisions are made based on medical science and our preferences, a system where no institution or provider gets a religious veto over another person’s most intimate decisions.

Today, thanks to science, modern health facilities looks nothing like those early hospitals where care was limited to brow wiping and bed changing and prayer. They are also different from those early missions in another way: today, the dollars that fund Catholic health care come from us. Almost half of the funds flowing through religious hospitals come from taxpayers, with the next largest chunk coming from private pay patients or their insurance companies, often in situations where patients have no choice about where to go. And contrary to popular myth (and the Catholic hospitals’ own self-promotion), Catholic hospitals provide less charity care than the industry average. We pay for these institutions, and we have the right to expect medical care that respects our personal ethical and religious priorities, including the right to manage our own bodies. It’s time to get religious institutions out of the healthcare business.

Valerie Tarico is a psychologist and writer in Seattle, Washington. She is the author of Trusting Doubt: A Former Evangelical Looks at Old Beliefs in a New Light and Deas and Other Imaginings, and the founder of www.WisdomCommons.org.  Subscribe to her articles at Awaypoint.Wordpress.com.

Related:
Will the Catholic Bishops Decide How You Die?
On Loving Life and Leaving It
Eight Ugly Sins the Catholic Bishops Hope Lay Members and Others Won’t Notice
The Difference Between a Dying Fetus and a Dying Woman
Catholic Hierarchy Lobbies to Suppress Religious Freedom
Self-Flagellation and the Kiss of Jesus–Mother Teresa’s Attraction to Pain
Anti-Contraception Cardinal Paid Pedophiles to Disappear

VIDEO: Catholic Healthcare – Legal Trauma!, Moral Politics Television (28 min. video).   Is your health care subject to “The Bishops’ Rules”? Today, three Catholic bishops oversee almost half the medical care in Washington State.  The Bishops’ Rules forbid contraception, abortion, participation with Death with Dignity, and any treatments developed through embryonic stem cell research.  The University of Washington is helping to fuel the expansion of bishop-controlled health care, and the WA Supreme Court just gave the bishops free rein to fire gay physicians and nurses. Join guest Monica Harrington, of CatholicWatch.org, and host Valerie Tarico for a discussion of publicly-financed Catholic health care and why its growth endangers your health and your rights. February 28, 2014.