In Bellevue and other Eastside communities, there is highly partisan debate underway, online and at city meetings, about the proposed men’s shelter in Eastgate, and about King County’s plan to have safe injection sites for the most addicted opiate users.

The real reason for the fervency of the opposition on these issues is that Republicans need wedge issues to distract voters from Donald Trump and from the fact that the Republican-controlled state senate just raised King County homeowners’ real estate taxes by up to $800 a year.

Republicans have lost control of the eastside in the state legislature: all legislators in the 41st and 48th legislative districts are Democrats (and female). That fate was sealed last year when Democrat Lisa Wellman defeated Republican Steve Litzow for the 41st LD state senate seat.

Likewise, in the 2016 election, every single precinct in the 41st, 45th, and 48th LDs preferred Hillary Clinton & Tim Kaine over Donald Trump & Michael Pence. (Source: database downloaded from: King County Elections) Opposition to Trump is what probably sank Litzow, who even sent out campaign literature stating his opposition to Trump.

The real estate tax increase was a result of the need to fund education, to satisfy the Supreme Court’s McCleary decision. Even Republicans agreed that the state needed to raise revenue. Rather than taxing the rich, as the Democrats wanted to do with their proposed capital gains tax and their plan to eliminate tax exemptions, Republicans insisted on funding McCleary almost entirely by raising existing regressive taxes (“no new taxes”). Another reason for the budget deal was to make sure that King County would subsidize the (mostly Republican) districts in the eastern part of the state.

All six Democratic legislators in the 41st and 48th legislative districts voted against the budget deal. But Democrats have only a two seat majority in the state house, so the bill passed, hours before the deadline that would have shut down the government.

This is the background that explains what’s going on with the opposition to the homeless shelter and safe injection sites.

The Eastgate shelter site is beside a transit center, a public health facility, and Bellevue College but is otherwise in a non-residential area. The closest homes are 850 away. But many citizens say they’re worried that the shelter — which would be “low-barrier” — would bring drugs and crime to the neighborhood and would lower real estate values.

Likewise, there is debate about whether safe injection sites should be located in King County, as has been proposed by the King County Council. The Council agreed that such sites would be located only in cities that welcomed them. City councils in Bellevue, Auburn, and Federal Way have voted to oppose such sites.

On social networks such as nextdoor.com, at town council meetings, in letters-to-the-editor, and at community meetings, some people are using their strong opposition to the shelter and the safe injection sites as wedges to attack politicians. There is a petition, I-27, to oppose heroin injection sites.

The petition and the opposition to the shelter are being driven by partisan Republican zeal to find wedge issues to win elections. Republicans are scared and need issues to win back votes.

The initiative campaign has been partly funded by major donors to Republican campaigns including Clyde Holland, Ken Fisher, Bruce McCaw and Skip Rowley. Signature-gathering began in Redmond and was focused on the Eastside suburbs, Sinderman said, though it was unlikely a site would be proposed there. And a spokesman for the I-27 campaign, Keith Schipper, is a former communications director for the Republican State Party…. Chris Vance, a former state Republican Party chairman, said he believes those leading the I-27 campaign sincerely believe safe-injection is bad policy. But they also see it as a way to make political gains. It is “absolutely the type of thing that’s been a wedge issue that allows suburban Republicans to differentiate themselves from Seattle Democrats,” said Vance, a former Metropolitan council member.

When I posted that quote on nextdoor, someone responded by telling a sad story about her niece dying in the hospital from liver failure due to drug use. I responded:

So sorry to hear about your niece. That’s why society needs to set up various kinds of treatment options. Surely you don’t think the supporters of safe injection sites like opiate use? Injection sites are one of many options for treatment, and only for the most addicted people. Besides, as the article points out, and as others have said, Bellevue and other Eastside communities are very unlikely locations for such a site. The City Council voted unanimously against it. Mostly, the issue is a wedge issue and a distraction from more pressing issues. For example, you point out “There are no beds. Medicare does not have coverage.” Why do you think that is? It’s because of our regressive, unfair tax system and corrupt political system. People are misled by propaganda. The issues of safe injection sites and the homeless shelters are distractions from more important issues.

Jared Nieuwenhuis, candidate for Bellevue City Council, used the issues of the shelter and safe injection site in his (nasty and dishonest) campaign literature. Here’s an image of the flier I got in the mail: 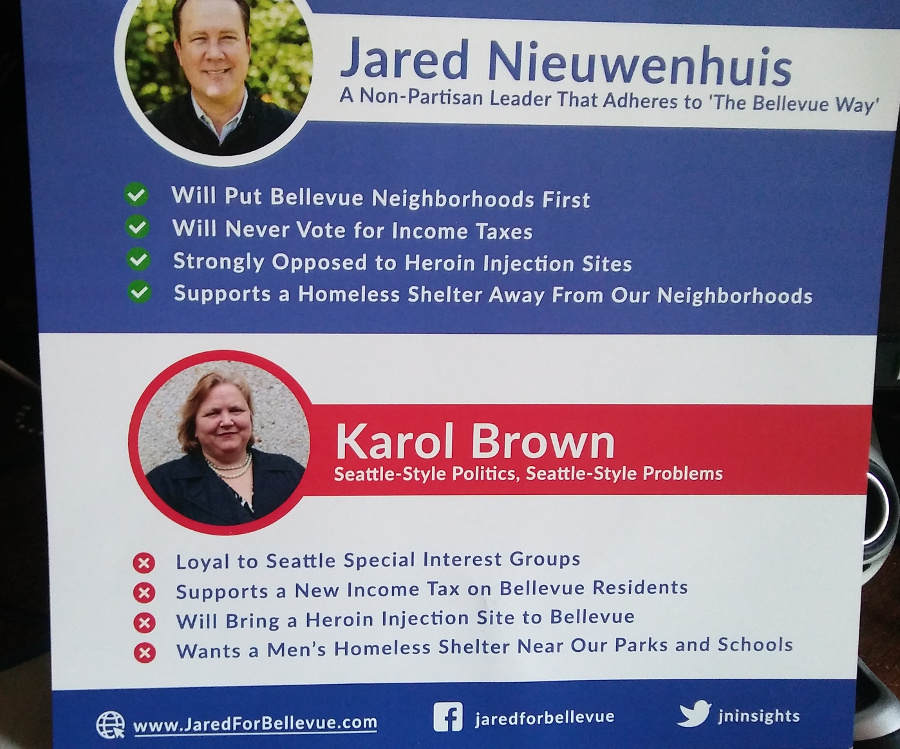 In theory the city council elections are non-partisan. In practice, they are anything but. Look at the highly partisan campaign literature distributed by Jared. What does “Loyal to Seattle Special Interest Groups” mean? It falsely claims that Karol Brown will bring heroin injection sites; she opposes them. I can’t speak for whether Ms. Brown supports an income tax, but she should, and so should you, because our regressive tax system is very unfair to the middle class. Indeed, real estate taxes in Bellevue are going up about $800 next year because the Republicans refused to support a capital gains tax and refused to eliminate tax breaks for corporations and rich people.

Many experts and informed politicians think there is a role for safe injection sites.

Yet I myself do not think Bellevue is the right place for a safe injection site. Besides, the issue is settled in Bellevue, since the city council has voted to oppose the site. Nor do I have strong opinions about the location of the homeless shelter.

I just think the massive opposition to safe injection sites, and to the homeless shelter, is blown way out of proportion. Both are being used as wedge issues. If people are so concerned about drug abuse, please support funding for other solutions to these problems.

How can we address the opiate crisis, homelessness, pollution, traffic, and our grossly unfair, regressive tax system that burdens the middle class and causes increasing concentration of wealth? Those are the real issues we face.

Bye Bye, Bybee Jay Bybee is the notorious author of the torture memo that the Bush Administration used to justify harsh treatment of prisoners. Here are new lyrics for the song Bye Bye, Birdie that Ann-Margret sang for the 1963 movie by the same name. Original lyrics New Lyrics (by Don Smith) Bye, bye, Birdie […]

One Reply to “In Bellevue, the issues of the homeless shelter and safe injection sites are wedge issues promoted by scared Republicans”