As a follow-up to my earlier Fun with Bernie Sanders and friends (in Second Life) here are some more photos and commentary from Second Life. 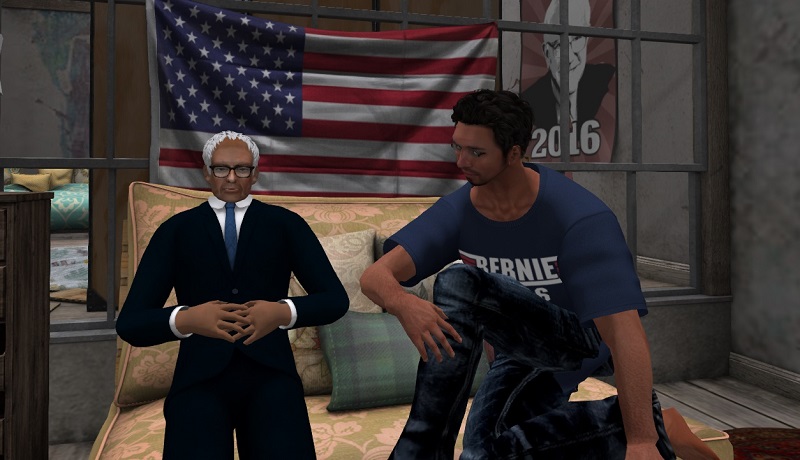 In Second Life, the Bernie Sanders Headquarters is adjacent to the Donald Trump Headquarters. Some Trump people put a huge sign facing the Sanders HQ.   So, the Sanders people erected a blue wall to block the view:

In response, the Trump people put up this (I made the blue wall temporarily invisible for the sake of this image):

When I clicked on the Trump wall — where it says “Click the wall for a teleport to Trump 2016 Second Life Headquarters” — it tried to install a virus.

The current status is that there’s a no-man’s land between the two headquarters.

Later some Trump “demons” visited the Sanders Headquarters to cause trouble, make noise, and fill the chat window with “Trump! Trump!” spam:

At least one of the spammers (aka “griefers”) got banned from the area.

But there were some polite Trump supporters. In fact, several people I met are supporters of both Trump and Sanders.  One guy said he liked Sanders’ economic policies but supported Trump’s tough stand on immigration.  Another guy said he wanted to set up a coordinated rally for both Trump and Sanders supporters to tell the Establishment that “we’re not going to put up with business as usual anymore.” I said that I couldn’t participate because I disagree with too many of Trump’s policy positions (see this comparison chart) and because Trump has said some racist, xenophobic, misogynistic and unpresidential things.

I visited the Trump headquarters (without my Bernie shirt) and was shocked by the profanity. It seems every sentence had a four-letter word.  Someone said the “n” word.  Someone said something about sending Chinese people back to China with their egg rolls.    It felt like a fraternity from Animal Farm or those college jerks from the film Borat.

I hope this isn’t stooping as low (it’s not my creation): Donald Trump as the garbage collector.

A dialog between Bernie Sanders and Birdie Sanders (prototype 2)

Fun with Bernie Sanders and friends (in Second Life)

Here are some images I designed and recorded in Second Life, the 3d virtual world. There’s a Bernie Sanders Second Life Headquarters there (at this location). I’m making a video/animation. If anyone would like to collaborate — on scripting, music, or editing — please let me know. Click for larger images. Comments comments