The Seattle P-I often publishes click-bait photo essays, which ask the user to click through a series of Getty images to read short summaries.  The photo essays hardly count as “articles”. The first page is a rewording of some source article. The reader spends most of her time clicking through the pretty photos. I suppose the Seattle P-I likes the cheap (free?) content and needs the ad revenue.

Called “The worst-ever wastes of US public money”, the photo essay is deceptive for several reasons.

First, the article omits some boondoggles that are far more costly than the ones it included.

The disastrous, ill-conceived war in Iraq has already cost $2 trillion; estimated eventual cost is as high as $6 trillion (source).

And what about the F-35 Joint Strike Fighter jet program? Each plane costs $400 million, twice the original estimate. The entire program’s estimated cost? $1 trillion to $1.5 trillion.  The program has been plagued with technical difficulties, and numerous critics claim the plane’s design is inferior.  For example, Pentagon’s big budget F-35 fighter ‘can’t turn, can’t climb, can’t run’;   F-35 Joint Strike Fighter is a Lemon (“Military expert Pierre Sprey, the founder and designer of the F-16 & A-10 Warthog airplanes, explains why the F-35 will not cut it on the modern battlefield”).

The list of boondoggles they do include — copied from GoBankingRate.com’s 20 Biggest Boondoggles in the U.S. — ranges from #20 “Missouri’s Pruitt-Igoe Housing Projects: $36 Million” to #1 “California’s High-Speed Rail: $68 Billion”.

Not all of the projects are primarily wastes of government. #12 is “New Jersey’s Revel Casino: $2.4 Billion”. That failure was mostly a failure of corporations, not government.  Morgan Stanley took a $900 million loss on the casino.   Republican Governor Chris Christie signed onto the project, guaranteeing $216 million in tax incentives.

In fact, progressives aren’t in favor of all government programs.

#10 is “Washington’s Big Bertha $3.1 Billion.”  Most Seattle progressives (environmentalists in particular) opposed spending on the tunnel and wanted public transportation instead.

Often government programs are corrupt or benefit the wrong people. But the solution isn’t to get rid of government. The solution is to fix the corruption and mismanagement.  But a tried and true GOP strategy is to make sure government works only for the 1%. Under-fund and corrupt the programs that do help the middle class.   Oppose regulations that might prevent abuses. Then blame government for the failures.

#1 in the list of boondoggles is California’s high speed rail. But construction began in January, 2015.  It’s too early to call the project a boondoggle. It’s a worthy goal: build high-speed rail from LA to San Francisco.

#17 is about Maryland’s sewer system. $1.1 billion is the estimated total cost.  The original projected cost was $700 million.  The scheduled completion date is in 2018. That doesn’t strike me as a terrible cost-overrun.

#5 on the the list is “Texas’ Superconducting Super Collider: $11 Billion”. But, in fact, $11 billion was the revised estimated cost; “only” about $2.4 billion of that projected cost was actually spent (according to this article and this article).

Let’s not forget, too, the billions of dollars wasted by corporations. Most businesses fail. Microsoft recently wasted $7.6 billion on its acquisition of Nokia and another $6.2 billion on aQuantive.

For the record, here are images of the headlines, followed by the text of the original article appearing in Seattle P-I. 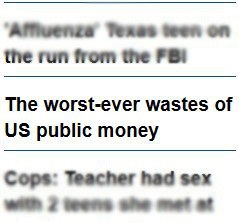 Sometimes, the government uses the money its taxpayers send each April 15 wisely, like building schools or paying benefits to veterans.

Other times, the government could save itself and taxpayers a lot of hassle just by throwing our money in a big trash can and setting it on fire.

Recently, the consumer finance site GoBankingRates collected the 20 biggest boondoggles in America, and perhaps not surprisingly, almost all of them can be put on the tab of either a state government of the feds.

If you thought the $435 hammer at the Pentagon or the Navy’s $640 toilet seat sounded like ridiculous wastes of money (they’re actually more like “creative accounting”), you’re not going to be happy with the $1.3 billion the government spent on an interstate that doesn’t actually connect any states.

Or the $2 billion on a dam that failed the first time they tried to fill it (killing several people in the process).

Check out the photos above to see the 20 biggest wastes of money in America, according to GoBankingRates, along with why they are and will continue to be such gigantic money pits.

As I mentioned above, the P-I got the content from GoBankingRates.com. In the original article, there’s a link “View All.”  If you click on it, you get to see the list of projects, and their corresponding images, on a single page.  The Seattle P-I makes readers click through the images to see the list. Annoying!

"The only people Obama has prosecuted are the whistle-blowers"

In his book “Death of the Liberal Class”, as well in recent articles Why Liberal Sellouts Attack Prophets Like Cornel West and The Obama Deception: Why Cornel West Went Ballistic, Chris Hedges condemns what he calls “the liberal class” for its refusal to confront the truths about the Democratic Party, about Barack Obama, and about […]

Localize this Action Camp and video

On Friday evening Republican Congressman Dave Reichert was supposed to attend a fundraiser in Bellevue, but he canceled — probably because of the protests that MoveOn had planned for the event. Comments comments