The US has more than 10 times the rate (prisoners per 100,000) than Sweden: 716 versus 67, according to http://en.wikipedia.org/wiki/List_of_countries_by_incarceration_rate. 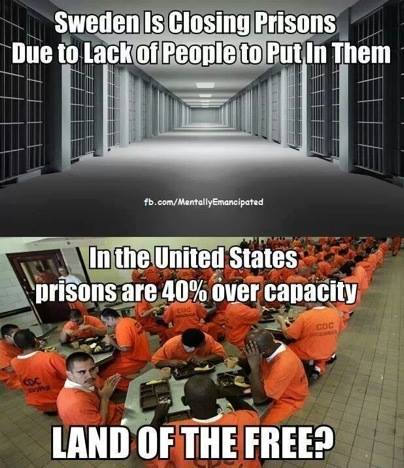 http://www.the-99-declaration.org/ “BE IT RESOLVED THAT WE, THE NINETY-NINE PERCENT OF THE PEOPLE of the UNITED STATES OF AMERICA, in order to form a more perfect Union, by, for and of the People, shall elect and convene a NATIONAL GENERAL ASSEMBLY the week of July 4, 2012 in the City Of Philadelphia to prepare and ratify a PETITION […]

There is Strength in a Union

Unions can go bad, (think Tony Boyle of the UMW) but the unions gave us the weekend, the eight hour day and ended child labor in this country. Unions have clearly lost power in the past 60 years and I hope they have bottomed out and are about to make a resurgence. I am a […]