Roger Waters, the 78 year old creative genius behind the progressive rock band Pink Floyd, is launching the This is Not a Drill Tour.  Checkout  that web page for tour dates and venues.  He’ll be in Portland, Oregon on Sept 10 and in Tacoma on Sept 16.  He’ll be at many other cities before and after then.

The Pittsburgh Post-Gazette had a review Review: Roger Waters drives home themes of war, poverty and injustice in Pittsburgh tour opener which includes these comments on the concert:

“The Bravery of Being Out of Range,” a rarity from the Gulf War era of 1992 that was a barking condemnation of politicians unleashing bombs and missiles that kill from a distance, began with a video of Ronald Reagan, branding him as a “WAR CRIMINAL” for his actions in Guatemala. It went on to put the same stamp, in bloody red, on the Bushes, Clinton, Obama and Trump. Nonpartisan, at least, right?

For Biden, it declared, “WAR CRIMINAL,” underlined with “Just getting started…”

During intermission we were entertained by the flying pig, emblazoned with “[expletive] the Poor” on one side and “Steal from the Poor. Give to the Rich” on the other. It was adorned, as well, with such defense contractor logos as Raytheon and Elbit Systems.

Peace And Planet News’ Antiwar Opera: Roger Waters Rocks the Garden with “This is not a Drill” also mentions the intermission pig and says

From start to finish Waters used his platform to scream out a message to a packed Boston Garden. It was a message that was explicitly anti-war, anti-authoritarian, pro-people, and pro-justice; offering commentary that was not only poignant but also intentionally challenging to a mainstream audience.

[D]uring “The Bravery of Being out of Range,” came images of every president since Ronald Reagan. Alongside the large label “WAR CRIMINAL,” were their rap sheets. Waters cited 500,000 Iraqi children killed by Bill Clinton’s sanctions, 1 million killed in the wars of George W. Bush, the drone programs of Barack Obama and Donald Trump, and the image of Joe Biden with the cryptic quote “just getting started…” Say what you will, for Roger Waters it isn’t about partisanship. He followed up with a positive celebration of the resistance at Standing Rock during a new song, “the Bar,” which ended with a simple question, “would you kindly get the fuck off our land?”

𝐁𝐫𝐞𝐚𝐤𝐟𝐚𝐬𝐭 𝐭𝐢𝐦𝐞 𝐌𝐚𝐫𝐜𝐡 𝟐𝐧𝐝 𝟐𝟎𝟐𝟐, 𝟔 𝐝𝐚𝐲𝐬 𝐨𝐫 𝟖 𝐲𝐞𝐚𝐫𝐬 𝐚𝐟𝐭𝐞𝐫 𝐭𝐡𝐞 𝐬𝐭𝐚𝐫𝐭 𝐨𝐟 𝐭𝐡𝐞 𝐮𝐧𝐧𝐞𝐜𝐞𝐬𝐬𝐚𝐫𝐲 𝐰𝐚𝐫 𝐢𝐧 𝐔𝐤𝐫𝐚𝐢𝐧𝐞 𝐝𝐞𝐩𝐞𝐧𝐝𝐢𝐧𝐠 𝐨𝐧 𝐲𝐨𝐮𝐫 𝐩𝐨𝐢𝐧𝐭 𝐨𝐟 𝐯𝐢𝐞𝐰.
I figured something out after tossing and turning all last night. We, on the left often make the mistake of still looking on Russia as a socialist enterprise, of course it isn’t, it’s an unadulterated neo liberal capitalist gangster mafia, modeled on the USA. So it should come as no surprise that its, possibly unhinged, autocratic leader has no more respect for the UN charter and international law than the USA does. They’re all just gangsters. Which means it’s even more beholden on us freedom loving law abiding anti war activists to stand shoulder to shoulder with all our brothers and sisters all over the world irrespective of race religion or nationality. That means standing with the Russian people the Ukrainian people the Palestinian people the Syrian people the Lebanese people the Kurds, African Americans, Mexicans, Ecuadorian rain forest dwellers, the Armenians the Greeks the Inuit the Mapuche and the Shinnecock to name but a few. It also means standing with all refugees everywhere all over the world, irrespective of the colour of their eyes and hair people! Also, in my view, in the short term, in these difficult days we should stop pouring good guy/bad guy fuel on the fire in the Ukraine, demand a ceasefire in the name of humanity, and stop pouring arms into that bleeding country just to satisfy the insatiable appetite of the international armaments industry. Instead we could raise our voices to encourage the idea of a neutral Ukraine as has been repeatedly suggested by wise men of good faith for many years. I suspect that a large majority of Ukrainians would welcome such an arrangement, but who am I to say? Maybe we should ask them? One thing’s for sure It can’t be left up to the gangsters. Left to their own devices they will kill us all.
Love
R.

It’s good that Waters is working on this. Is it sad that we rely on aging rock stars to inspire and educate the public about war and peace?

Music played a large part in helping end the Vietnam War and in raising consciousness in the 60s and 70s about issues such as civil rights, inequality, and the environment.  Perhaps musicians such as Waters will band together and help raise awareness about the costs of militarism: 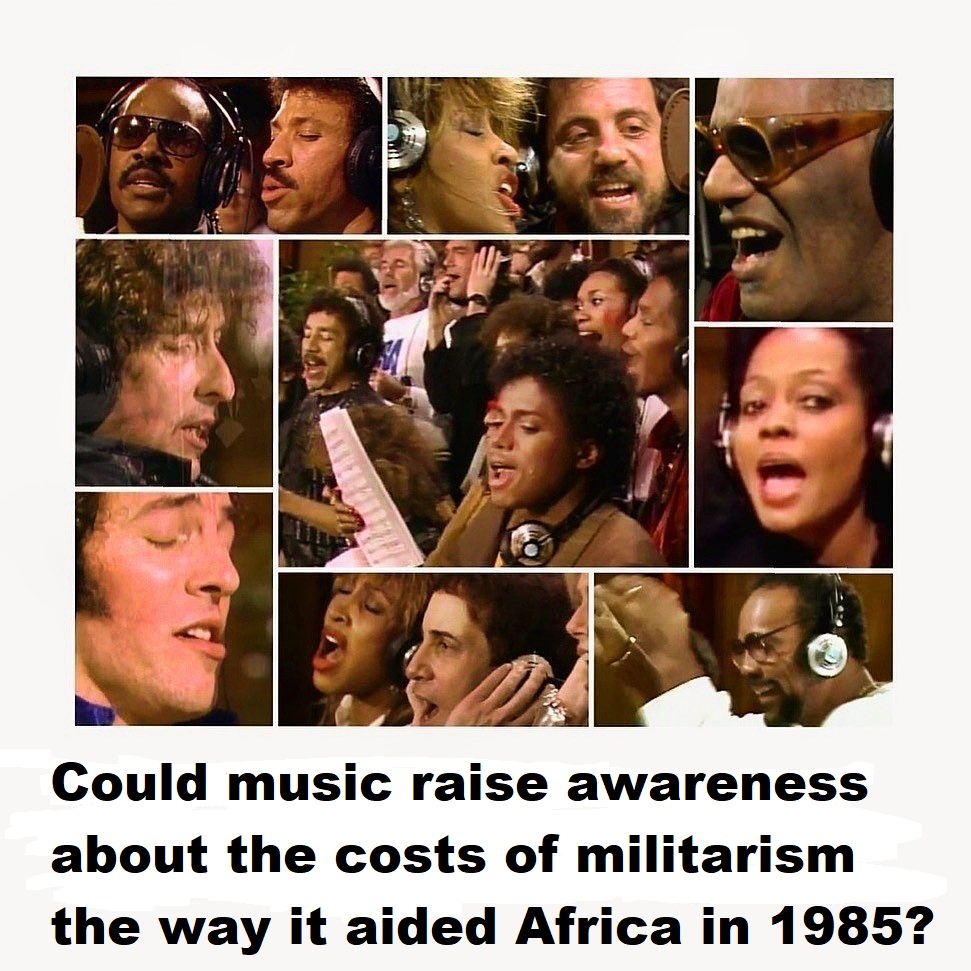 Got radio? Communities step up to the LPFM microphone

A rare window of opportunity will soon open. Local communities nationwide will have the chance to tear open the drapes, roll up the blinds, throw that window wide open and shout out to the surrounding region and potentially worldwide.A Low Power FM radio band could soon be at your fingertips. From October 15 to 19, […]

Former DHS Analyst Daryl Johnson on How He Was Silenced for Warning of Far-Right Militants in U.S Comments comments

Drones, the C.I.A., and Pakistan

Bush oversaw forty-eight drone strikes in Pakistan during his two terms. Since 2009, Obama as authorized more than three hundred. In Mazetti’s telling, CIA leaders repeatedly pushed Obama for more expansive authority to used armed drones. They got their way in almost every instance.  … Munter soon discovered that, under President Obama, “it was what […]