One of the most successful climate policies in the world is the revenue-neutral carbon tax in British Columbia. Created in 2008 by a right-of-center government, BC’s tax is revenue-neutral, meaning that all the money generated is used to rebate personal and corporate income taxes; there is also an offset for low-income households. The tax rose from $10 per ton of CO2 to a $30 peak in July 2012, and has already reduced emissions by 5-10%. 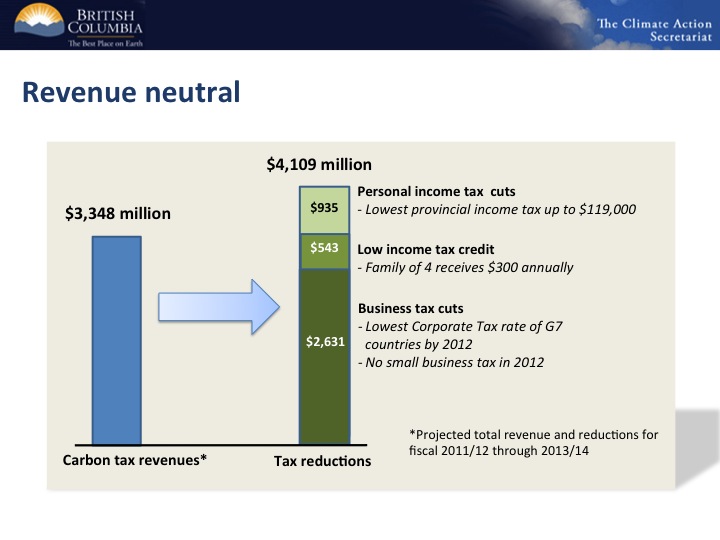 Carbon tax rate: A tax of $30 per metric ton of CO2 on all fossil fuels consumed in the state, including jet fuel and the carbon content of imported electricity. This tax would amount to ≈$0.30/gallon of gasoline or diesel; ≈$0.03/kWh of electricity from coal, and ≈$1.50/mmBTU natural gas (or ≈$0.15/therm or ccf, or ≈$0.015/kWh of electricity). The tax rate would increase by 5% per year.

Climate benefit: Fossil fuel combustion accounts for about 85% of the 100 million metric tons of annual greenhouse gas emissions in Washington.

Revenue generation: Assuming a 10% reduction in emissions, a tax of $30/ton CO2 would initially generate as much as $4.6 billion per biennium ($2.3 billion per year).

Revenue recycling for a $2.3 billion per year carbon tax

1. Reduce the state sales tax by one percentage point: $1.1 billion per year.

The state rate is 6.5% and generates $7.2 billion per year. (City and county levies bring the rate up to as much as 9.5%; see Tax Statistics 2011) Carbon taxes and sales taxes are both regressive, meaning that their burden is greater for lower-income households.

3. Eliminate the B&O tax for manufacturers: $160 million per year.

The B&O tax as a whole brings in about $3 billion per year, but according to DOR only $160 million is from manufacturing. Major rate categories are manufacturing and wholesaling: 0.484% of gross receipts; retailing: 0.471%; and services: 1.8%. Case studies suggest that the carbon tax may be better than a B&O tax for many manufacturers.

This policy has been analyzed and supported by the Economic Opportunity Institute.

Is It Time to Send Out an SOS Call?

I am thinking about suggesting that the progressives, radicals, and rabble (that’s me) consider sending out an SOS. Yes, an emergency call.  I think we are there. In this instance I think the SOS will be an emergency call for a Summer of Solidarity (think Summer of Love). Those of us who voted in 2008 […]

The state Dems' platform says No to TPP. Will our lawmakers listen?

The Washington State Democrat’s platform says We oppose: . . . Trade agreements negotiated in secret without public interest representation; Foreign policies that put the profit-making interests of corporations above the rights, laws, and interests of governments or workers, such as the Trans-Pacific Partnership (TPP); But the last I heard both our US Senators, as […]