Executive summary: Her responses were all pretty moderate. She opposes Trump and supports the impeachment inquiry but doesn’t seem angry or populist. I was disappointed by her responses to the question about how to defeat Trump and to the one about what to do about the climate crisis. I think the questioners thought we are in a dire situation. DelBene’s responses emphasized the need to be civil and to be bipartisan. She said she hears from many Trump supporters. For many of the questions her response was the reasonable but weak one: blame the Republicans, win back the Senate and the White House. DelBene mentioned that her district is one of the most evenly divided swing districts in the nation. She is co-chair of the New Democrats — the centrist Dems in Congress. 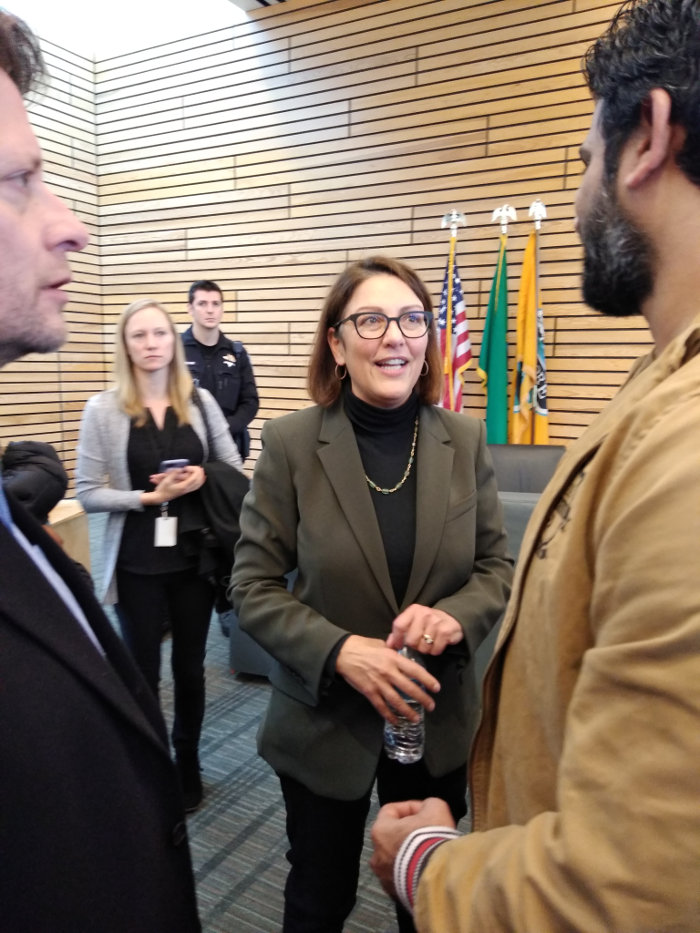 DelBene is on the Appropriations Committee. She said that the government is being funded by continuing resolutions, because they can’t come to agreement on a budget. The current continuing resolution expires on November 21. The sticking point for passing a budget is whether to fund a border wall. This must be resolved.

DelBene mentioned we need to continue the “fight against Russian aggression.” That sounds like a bad, destructive, wasteful idea. Why should the U.S. be waging a cold war, surrounding Russia with troops, and supporting regime changes? We’re not the world’s policemen and can’t afford to be.

A questioner complained about local development ruining his community: too much construction. DelBene responded that it’s not a federal issue. The questioner stormed out, saying “You’ve done zero!” DelBene or Frockt responded by mentioning their support for affordable housing — an ironic response, given the questioner’s concerns. I notice there was a policeman in the Kenmore City Hall room where the meeting was held. Before the event the mayor of Kenmore emphasized the need for civility. Apparently, some past town halls were raucous.

A young girl, maybe 9, asked about climate change. DelBene said that many members of Congress are in denial. In fact, dealing with the climate is an economic opportunity, especially for innovative Washington State.
She said that the carbon pricing bills in Congress aren’t perfect but some version will pass the House. They have no chance in Mitch McConnell’s Senate. Two hundred House bills sit idle on Mitch McConnell’s desk.

Someone asked about health care, saying that 400,000 Washingtonians still have no health care and asking DelBene to suppoort Rep. Roh Khanna’s State-based Universal Healthcare Bill that allows states to develop health care bills on their own. (That will be especially important if the courts overturn the Affordable Care Act or if it collapses due to GOP opposition.) DelBene said that the ACA isn’t perfect but it was a step forward. But Trump is trying to roll it back. He repealed the invididual mandate. She said she’d look into Rep. Khanna’s bill. She said she supports a public option. She hasn’t come out in favor of single-payer healthcare. She mentioned support for HR 3, which would allow Medicare and Medicaid to negotate prescription drug prices. She’s not listed as a cosponsor.

Senator Frockt mentioned that the legislature passed a bill that would enforce ACA-like protections on pre-existing conditions and limits in case the national ACA goes away. Frockt mentioned Cascade Care, which gives the government a strong role in setting prices. He called Washington State a “laboratory of democracy.” He is a former consumer protections attorney.

A questioned pointed out that almost everyone in the audience was middle aged or elderly and asked DelBene for ideas to increase youth engagement. DelBene mentioned that she attends civic classes at schools. She (or it might have been Frockt) pointed out that she read an article that contained a graph that showing voter turnout as a function of age. The line was almost linear: the older you get, the more likely you are to vote. Why don’t young people vote?!!!!

A resident of a mobile home park complained about unfair harassment by owners. Senator Frockt said he’d meet with the constituents.

Someone said that their personal data was exposed in a data breach at a public school. DelBene mentioned HR 2013 which she introduced: Information Transparency & Personal Data Control Act. She said that Europe is further ahead than the U.S. in laws about digital privacy rights.

A questioner said: we need to stop Trump, we are in an emergency for our democracy! DelBene’s response was to mention that her district is the most evenly bipartisan, she hears from Trump supporters, and we all need to learn listen more to the other side.

Someone asked about ranked-choice voting, which is used in Maine and in 20 cities nationwide, including, now, in NYC. Would she support H.R. 4464, the Ranked Choice Voting Act? She’s not a cosponor. The response was to mention that WA has a top-two primary system. Lots of people still can’t vote at all nationwide, due largely to GOP voter suppression tactics.

A questioner asked a tongue-in-cheek question: What would happen to me if I refused a Congressional subpoena? DelBene said that Congress is a co-equal branch of the federal government and needs to claw back more oversight of the executive branch.

A questioner said we are in a crisis situation and need to think outside the box. DelBene’s response was moderate: work to elect more Dems. She gave the example of Trump rolling back gas-mileage standards.

Someone asked about the expensive and corrupt effort by drug companies to extend the life of patents. She said that the USMCA treaty is the “new NAFTA” and that’s where such issues are being negotiated. The four areas of discussion are (1) labor law enforcement, (2) environmental law enforcement, (3) tariffs, and (4) “biologics” (which includes patents). She said there is “quiet discussion” (which might be shorthand for “corrupt sellouts”). She said the Speaker of the House (Nancy Pelosi) wants bipartisan work on that.

Someone asked about family separation at the border. DelBene mentioned traveling there and being outraged. This isn’t our values, she said. She said her office has case workers that assist with immigrants rights issues. She supports comprehensive immigration reform.

I had wanted to ask a question about U.S. military spending and adventurism, but time ran out. Afterwards, though, I asked her face-to-face. I said that the U.S. has killed hundreds of thousands of people (probably millions) and wasted trillions of dollars in disastrous, corrupt wars and proxy wars which created enemies and refugees. We still have about 800 military bases in 70 countries and spend between $700 billion and $1 trillion each year on the military, despite $22 trillion in debt. When will the craziness end? She listened intently, standing a bit too close to me for comfort, and seemed somewhat shocked by my question. I said that the difference between the Dem proposal ($733 billion) and the GOP proposal ($750 billion) isn’t so high. She said Congress needs to come to agreement on a military budget. She said that the Pentagon failed an audit and the Republicans oppose the audit. (In fact, I know that Mac Thornberry, the ranking Republican on the House Armed Services Committee, worked with Rep. Adam Smith to try to get the Pentagon audited.) She mostly blamed the Republicans and didn’t have much to say. It’s sad that no other questioner mentioned this issue.

Rep Adam Smith’s town halls lasted a full two hours, and every questioner had a chance to speak.  DelBene’s town hall lasted 90 minutes and she arrived ten minutes late. More people wanted to ask questions at the end.  But both she and Sen. Frockt stayed after to answer questions in person.

DelBene did most of the speaking. Senator Frockt spoke of the active legislative session that ended earlier this year. He mentioned four areas where the legislature made progress: (1) investments in behavioral health such as detox beds, (2) Health care, including increased funding for nursing homes. (3) education (We’re out of the McCleary box — the court order to adequately fund education.), and (4) the 100% clean bill (apparently, this) for the environment. He said that we’re still under-funding Medicaid.

The woman sitting next to me said that Pramila Jayapal used to represent her; now DelBene does. The woman said that Jayapal is too far left for her, but DelBene isn’t left enough.

(Note: my memory of the meeting benefited from reading a summary that Mark Vossler of Indivisible Kirkland wrote on facebook.)

I presume Microsoft would benefit from the Trans-Pacific Partnership trade deal.  Rep. Suzan Delbene and her husband, Kurt DelBene, both used to work for Microsoft in senior management positions. Both of them have personal ties to the company and presumably own considerable stock in Microsoft. Shouldn’t she recuse herself from votes concerning the TPP? Or […]

Wonder why Micosoft doesn’t pay state taxes and why Governor Gregoire and Suzan Del Bene are holding hands? If you missed last week’s discussion of the CD1 Candidates you can watch it again this evening on Channel 77 at 8:30 PM or online anytime here: Candidates Vying for Congress in Washington’s New First District. Comments comments

DelBene, TPP, and Microsoft stock: should she recuse herself?

Rep. Suzan DelBene is apparently going to vote in favor of trade promotion authority (“fast track”) for the Trans-Pacific Partnership, unlike Reps McDermott, Smith, and Heck. A friend called DelBene’s office and an aide said she is voting for fast-track. Last fall I spoke to her and asked her to oppose it. She was very […]