The auditorium at Bellevue College was standing-room only on March 23, 2019  for the town hall of the 41st Legislative District lawmakers Sen. Lisa Wellman, Rep. Tana Senn, and Rep. My-Linh Thai. 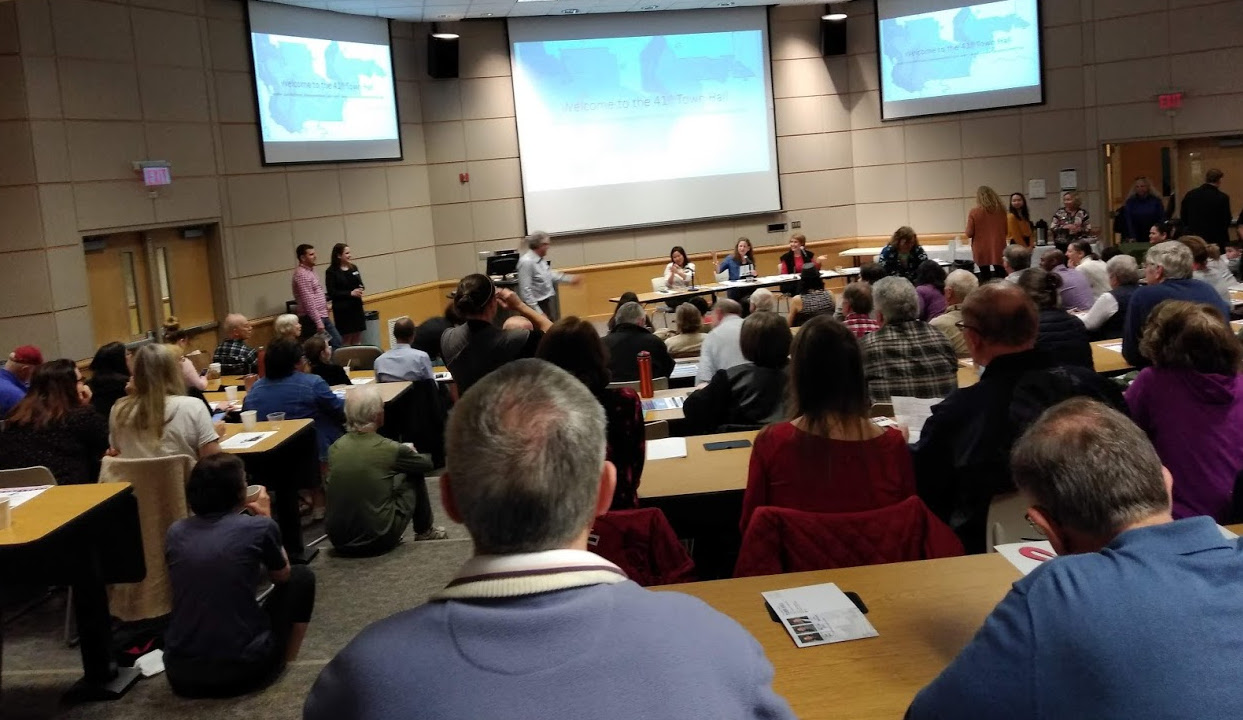 Rep. Senn is the Chair of Human Services & Early Learning and also serves on Appropriations and Local Government. In her preliminary statement, she discussed early learning and TANF (Temporary Assistance for Needy Families).   Senn said early learning is high quality but low access. Child care is more expensive than college (than in-state tuition).  63% of the state has childcare deserts.  Many providers are paid barely minimum wage. TANF and other public welfare programs were devastated by the recession. TANF saves kids who are victims of domestic violence.  Work is needed on mental health.

Rep. Thai is Vice Chair of Civil Rights & Judiciary and serves on Education and Health Care & Wellness.  She is the first refugee to serve in the Washington State legislature. She said that despite the legislators work on McCleary, education is not really funded.

After opening statements, the town hall quickly moved on to questions and comments from the audience.

Someone asked a question about vaccines, complaining that they are unsafe.  Rep. Thai, who was trained as a pharmacist before serving as Bellevue School Board president and being elected to the state house, agreed that certain people shouldn’t take vaccines. (I presume she means people with immunodeficiency diseases, for example).  No medicine is 100% safe, she said.    I was surprised that she didn’t clearly state that in the vast majority of cases, vaccines save lives, and that it’s critical that most children be immunized.    I suppose that nowadays “it goes without saying” that anti-vaxxers are wrong.

The next question was about taxation:  income tax? Senior tax relief? Capital gains?  Why did the legislature raid the rainy-day fund?

Rep. Senn said: we paid for McCleary (funding education) for only one year. Washington State is aging the fastest of all states. We need new revenue. Washington is one of only seven state without a capital gains tax, which will affect only about 14,000 people and which exempts middle class savings such as sale of your home and retirement savings.  We have a very upside-down tax system.

Senator Wellman said it’s “embarrassing to be a Democrat in a state where the rich people” pay less than the poor in state taxes (as a proportion of income).  She does think there is support for a capital gains tax.   Our current tax system is unfair. Even the Business & Occupation tax (B&O tax) is unfair. She said that because of exemptions, the high tech sector pays only $40 million in B&O taxes per year, and the aerospace sector pays only $80 million, out of $4.2 billion in revenue. (I believe, too, that the B&O tax is based on revenue, not profit, so it especially hits smaller businesses that aren’t yet profitable. Boeing and Microsoft won tax breaks that exempted them from much of the B&O tax.)

Wellman said, we need a “complete review of our tax structure. It’s upside-down. It’s unfair. And we have to change it.”  If we had a state income tax we could reduce sales and property taxes, but for that we would need an amendment to the state constitution.

Most of the audience applauded. A few people booed.

There was a question about a homelessness bill  — SB 1591 would mandate that communities not treat homelessness (public camping) as a crime.  The legislators said that that bill is not moving forward. Rep. Thai mentioned that 200 Bellevue public school students are homeless.

The legislators spoke in favor of HB 1576, cosponored by Rep. Tenn, which would lower the cost of condo construction by making it harder for condo owners to sue builders (condo liability reform). This bill seems destined to pass. I was skeptical of it (because of donations to legislators from the building and real estate industries), but support seems widespread, even by legislators I admire.

There was a question about the sex education bills that Sen. Wellman, in particular, worked on. Wellman said “Almost everything you’ve read about what’s in the bills is wrong.”  She said “We’ve been doing it for years”  — meaning: teaching sex education — but lots of people laughed because they interpreted it as meaning having sex.

Wellman said that parents have the right to opt their kids out of sex education.

She said that the three big topics that seem to draw the most questions and contacts are guns, vaccines, and sex education.  (One year I heard them say that they got the most contacts in support of a bill to protected chickens from mistreatment, thanks to PETA. Most citizens don’t contact their legislators.)

When I arrived at the town hall, someone was handing out fliers in opposition to two Washington State bills that deal with gender issues and sex education:

The fliers in opposition to the bills were copies of the following letter:

Senate Bill 5689 requires each school district to adopt or amend a transgender student policy and procedure. All students deserve to be protected and bullying should not be tolerated for any reason, but schools already have bullying policies in place. Why is there a need to single out one very small segment of the student population for special treatment and what will it mean for other students?

It’s curricula that tells children who are below the age of consent to “Choose activities with little to no risk like oral sex;” directs 3rd-4th graders to question their gender; tells students that doctors “assign” a sex to a baby; refers to women and girls as “people with a uterus and ovaries;” and suggests the withdrawal method because “it’s free and always available.” The fact sheet doesn’t mention the 22 percent failure rate. They also repeatedly tell your children that they can get free birth control, STD testing, and abortions without your consent.

SB 5689 requires “school districts to adopt or amend a transgender student policy and procedure and to designate a primary contact”. See this pdf file for the text of SB 5689.

As Senator Wellman said at the town hall, SB 5082 teaches children “You have control of your body. You have the right not to be hugged. Children learn about their space, whether hitting or hugging.”  Some kids are raped at age four. Kids need to be trained about what’s normal and what’s problematic, so they can talk to trusted people if someone (maybe a family member) is touching them inappropriately.

Rep. Senn said that there is lots of bullying of transgender kids.  Often foster kids who are LGBT aren’t accepted by their foster parents and are mistreated.

There was big applause in support of the sex education bills.

There was a question about the public records bill. The governor vetoed a bill last year, after public outcry (e.g., in the Seattle Times) alleging that the legislators were trying to keep communications private.    There was misinformation about the bill, though. It had bipartisan support and actually made communications more public.    You should be able to tell your legislator, “I have violence in my home” without that information being made public.  There needs to be a balance between privacy and openness.

It seems the legislature will pass a bill requiring candidates for U.S. President to release their tax returns in order to appear on the ballot in Washington State. When this was brought up, there was loud booing in the audience (from Republicans, presumably).   While I agree that Trump should have released his tax returned, I’m not sure that this bill is a wise idea. It’s highly partisan and I wonder about its constitutionality.

Senator Wellman says she supports having a primary (rather than a caucus) for the Democrats to select their nominee for President.

There was a question about gun control: undetectable, untraceable guns, via 3d printing.

The age of consent in Washington State is 13 for various issues such as getting medical care without parents’ consent. (Surprising.)

The state needs to invest in mental health care, such as more counselors and social workers in schools.   The graduation rate for special needs student is 58%; the state has to spend more money on them.   Technical and community college faculty are underpaid.

The legislature is working to outlaw ridiculous non-compete agreements, such as one that prevented a low-paid worker at Jimmy Johns from working at another fast-food restaurant.

All three legislators said they support overturning I-1000, which made it impossible to give racial preferences (“affirmative action”) for minorities. This is a contentious issue, since a large number of Chinese Americans are adamantly opposed to affirmative action: they regard it as a form of racism that harms their kids’ chances to get into top-notch schools.

Why you need to lose Social Security and Medicare

Economist Arthur Laffer is touted as a go-to source of wisdom by conservative think tanks and corporate lobby groups in Washington state like the Washington Policy Center, Evergreen Freedom Foundation, National Federation of Independent Businesses, and Association of Washington Business. But a recent report shows Laffer’s economic prescriptions are more likely to hurt than heal […]