At the June 8th Town Hall meeting of Rep. Adam Smith (D-WA 9th CD) in Crossroads, Bellevue, Rep Adam Smith gave progressive answers to almost every question he was asked: on immigration, on the environment, on low-yield nuclear weapons, on convening impeachment hearings for Trump (he mostly supports it),  on taxation, on peace, etc.

One constituent asked him if he’d stop accepting PAC money for campaigns.  His response was “no.” You can listen to his response here (you’ll probably want to turn up the volume):

He said he prefers that there’d be public financing of elections. He disagrees with Supreme Court decisions such as Citizens United.   He said, “a lot of the PACs, they don’t like the fact that I want want to cut all those nuclear weapons… I vote my district, not the people who give me money. And, quite frequently, the people who have given me money have stopped given me money, because they didn’t like the way I voted.”

Smith said that many politicians and candidates say they don’t take PAC money. “They all take money from corporate executives.” That’s no different, “in fact, it’s less transparent.” PACs were designed to as in the interests of election reform.

To be clear, the Citizens United Supreme court decision established a new constitutional right for corporations to give independent expenditures on political messaging. “The court upheld requirements, however, for public disclosure by sponsors of advertisements. The case did not affect the federal ban on direct contributions from corporations or unions to candidate campaigns or political parties.”  (source)

Rep. Smith said several times that he votes his constituents (what they want). I asked him a question: “How do you balance voting your conscience and voting what your constituents want? If your constituents wanted to put all blacks and Jews in prison would you support that?” His response was that he votes his conscience on some issues. When he was in the Washington state senate, he voted for LGBT rights, even though most of his constituents didn’t support LGBT rights at that time. (In fact, he said, his wife had doors slammed in her face when she went out knocking on doors for him.) I should have asked, “If your constituents want higher military spending, would you vote that?”. Rep. Smith has become more progressive since his congressional district moved towards Seattle. This is both good and a bit disturbing, because many of these issues are matters of conscience. 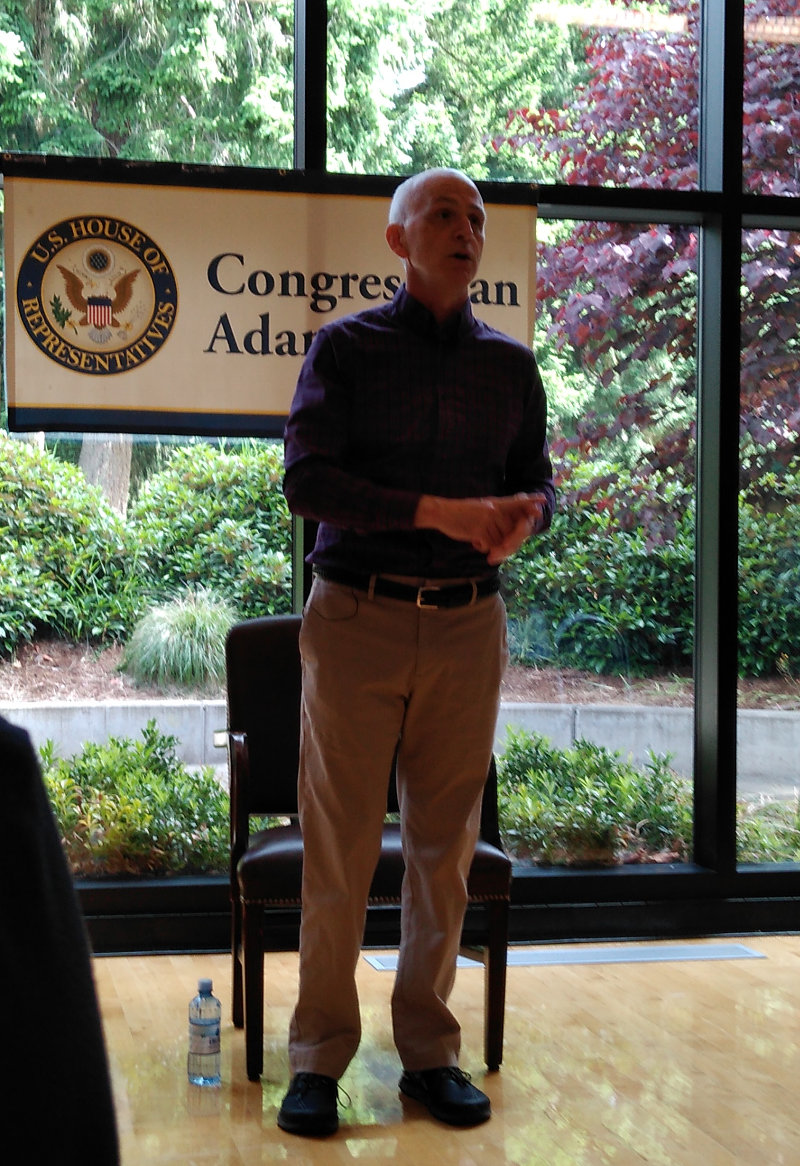 Uncle Sam and his Shrink

After three sleepless nights, Uncle Sam goes to see his psychiatrist. On the couch, he tells the Doctor, “I spend all my money on wars in Iraq, Afghanistan, Pakistan and Libya. I have no money left to spend on highways, social-security, hospitals, schools and libraries at home.” “My Pentagon budget is growing exponentially, year after […]