In Road Kill: How Bertha Left the Surface-Street Option In the Dust, Ellis E. Conklin reports that “Powerful interests rallied around the tunnel and diverted then-Governor Gregoire from a less costly route.”

Specifically, “The downtown business interests, the Chamber of Commerce, Boeing, the unions, they all wanted a highway, period. Nothing was going to stop them.”

Washburn concedes that Boeing and Microsoft, in particular, pressed their case for the tunnel with Gov. Gregoire. “Certainly, they had an interest for obvious reasons, being able to move their product and their people.’ But Washburn stressed that any pressure that they, or the Chamber, exerted was no more aggressive than anyone else’s.

“No,” counters Moon [an opponent of the tunnel], “their voice was always louder than ours.”

So, these two immensely rich companies arrange to avoid paying state taxes, hire employees from overseas, and get you and me to subsidize their transportation needs. 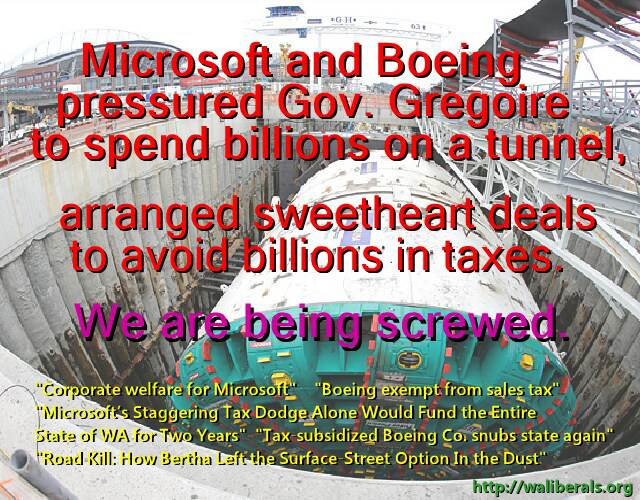 It’s a good time to talk about money, who has it and who doesn’t, especially with the Legislature at loggerheads about the budget. Why? Because the taxes that fund our state’s budget come largely from the money we all spend. Notice I said “money we all spend,” not “money we all make”? In most other […]

2013 March Analysis of ERFC Revenue Forecast David Spring M. Ed. March 20, 2013 springforschools@aol.com The ERFC has released their March 2013 Revenue Update so it is time once again for an analysis of their forecast. As a reminder, past ERFC forecasts have over-estimated revenue and under-estimated expenditures by billions of dollars. A healthy skepticism […]

The Supreme Court said that political spending is a form of free speech. But they allow states to require donors to submit reports of their spending. Washington State’s Public Disclosure Commission collects such data and makes it available on their website. I downloaded the database of campaign contributions from this link. The database has 3,831,155 […]