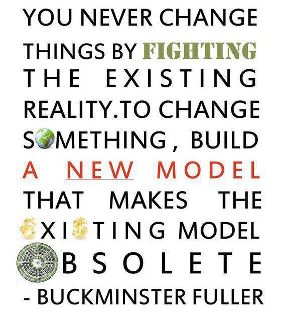 “You never change things by fighting the existing reality. To change something, build a new model that makes the existing model obsolete.” — Buckminister Fuller

But taken to extremes, such thinking would lead to frequent divorce, destruction, and abandonment of institutions and plans.   Sometimes you do need to fix what’s broken instead of replacing it with something brand new.

There comes a point, though, where replacement is the best approach. Has the Democratic Party reached that point? I don’t think so.

This "trade deal" STINKS! FLUSH the TPP dot ORG – REPORT from the frontline

I’m making an animation video about this. Any ideas for questions the young lady should ask our bachelors (Exxon Mobil, Goldman Sachs, and Monsanto)? And how should the bachelors respond? If I use your ideas, I’ll mention you in the credits. Comments comments