One of my great-grandfathers, Rudolf Leo Schirra Sr., was born in Rammstein (no joke), Germany in 1876.  He emigrated to the US in 1889 and for the rest of his life lied about being born in Chicago, apparently to avoid immigration questions.

Okay, so why care?  Well, Rudolf Senior was a labor organizer from about the time he got off the boat.  His family were traditionally bakers, and he worked in bakeries in Philadelphia.  Conditions were great.  So awesome were the owners of the bakeries that they hired thugs with whips, ostensibly to keep the rats in check.  I am not joking.  When you see the sign, “The beatings will continue until morale improves” remember that in the 1890s and 1900s, that wasn’t actually a joke.

Prior to the Wagner Act being passed in 1935, trade unions in the United States weren’t illegal per se, but neither was it illegal for factory owners to hire thugs to ‘break unions’.  Whenever I see Westerns or old movies lionizing the Pinkertons as some sort of proto-detective agency, I want to scream.  The Pinkerton Agency was originally a corporation made up of thugs, literally.  By 1890, the Pinkerton Agency had more armed men than the United States Army.  You can look that up.  The entire reason for the existence of the Pinkerton Agency was to infiltrate unions, break skulls of strikers, and generally be a private army for millionaires like Andrew Carnegie.  And until the practice was outlawed in 1893, there was quite a bit of overlap between the Pinkerton Agency and the federal government, which contracted with the Pinkertons to “detect and prosecute those suspected of violating federal law”.

The Pinkertons were merely the best organized of the thugs hired by factory owners to literally beat and kill strikers.  There were many, many others.

I mention this because Rudolf Senior was the General Organizer of the International Baker and Confectioners Union in Philadelphia.  He gave speeches across the country and was instrumental in the investigation of child labor violations in Indianapolis in 1903. He was one of three delegates to the American Federation of Labor conference from at least 1905 to 1917.  Rudolf is recorded as comparing union shop conditions in Philadelphia to non-union shops.  Union shop workers were getting $3 a day for 10 hour days and non-union shop workers were getting $2 a day for 14 hour days in 1905.  In 1924, he was trying to get a Mexican union off the ground. By 1925, he had moved to California and was a supervisor of the California State Federation of Labor.  He was instrumental in securing decent labor conditions in the Stockton factory of the Gravem Inglis Baking Company, later renamed Sunbeam Bread. 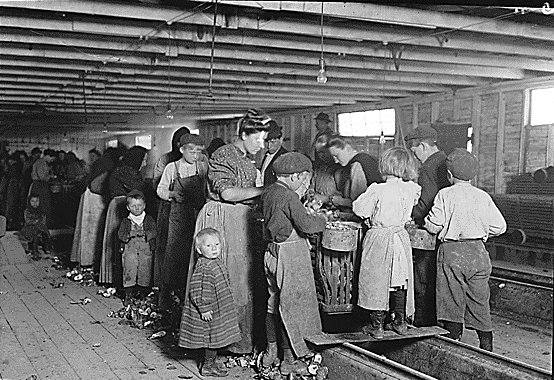 He was therefore not popular with corporate CEOs and factory owners, considering he organized multiple strikes and boycotts against National Biscuit Company (use the first few letters of each word to find out what they are called now), McKinney Breads (bought out by the General Baking Company which later became General Foods) who were using child labor, among other nasty practices. In fact on multiple occasions they took contracts out on him.  I don’t mean, “hey, lawyer dude, let’s draw up a contract with Rudi Schirra”, I mean “here’s $5000 to bring me the head of Rudi Schirra”.  He slept with dual revolvers and was shot at quite a few times.  Labor organizing didn’t just involve guys with placards, it involved guys with baseball bats, knives, and guns.

Rudi was a tough guy.  He married Barbara Bildner, who had a club foot.  One day, an asshat walked into the bakery and asked “hey, Rudi, how come you married a cripple?”  Rudi was slicing bread with a bread knife and my grandfather had to prevent him from using the bread knife on the asshat.  He later became a police officer and was shot by an overzealous bank guard during a robbery.  Rudi not only didn’t die, he beat up the bank guard for wounding him.

So, Happy Labor Day, all.  Remember all those that fought for decent working conditions, eight hour days, and 40 hour weeks.  It wasn’t easy and unions were absolutely necessary then, and continue to be!

Massachusetts militiamen with fixed bayonets surround a group of strikers during the Lawrence, Massachusetts Textile Strike of 1912. Source: Wikipedia.

Boeing is going, so time to woo new plane makers

What rhymes with going, going, gone? How about Boeing, Boeing, bawn? That doesn’t make sense in English, but it sure hits the nail on the head with the once loyal, Washington-state born, bred and based Boeing Company. Every sign points toward Boeing’s departure from our state. I never thought I would see this day. When […]

Uber, TaskRabbit, Airbnb, and other companies are putting capitalist ventures in the hands of the consumer–but how much do these companies really benefit American workers? According to veteran journalist Steven Hill (Europe’s Promise), the answer is not at all. Hill argues that, more than anything, these new tech-based, easy-money, sharing enterprises are doing great harm. […]

Time to take care of our own: Let’s pull ourselves into the 21st century, America

The United States is one of four countries in the world that doesn’t offer new moms paid maternity leave. Pakistan has better maternity leave policies than us.  Now, I can be an American exceptionalist as good as the next girl, but are you kidding me? Just two months ago, the FAMILY Act was introduced to […]