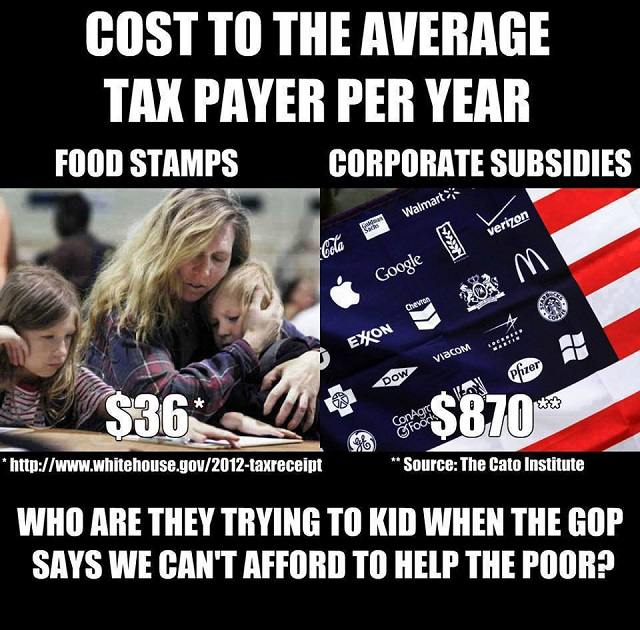 I’m trying to verify these numbers.

What about the $870 figure?  A Cato publication from last summer, Welfare for the Non-Poor says: “The Cato Institute estimates that the federal government spent almost $100 billion on corporate welfare last year.” Also: “In 1979, for example, more than 54 percent of federal transfer payments went to the poorest 20 percent of Americans. Today, less than 40 percent does.” But, numbers can lie, and the same publication says, “The federal government currently operates 126 separate anti-poverty programs at a cost of $688 billion per year.”  Perhaps they’re counting Social Security and Medicare in those figures.

Notice that the $100 billion figure doesn’t include the hundreds of billions of indirect subsidies in the Pentagon budget. As it says here:

To clarify what is and isn’t corporate welfare, a “no-bid” Iraq contract for the prestigious Halliburton, would not be considered corporate welfare because the government technically directly receives some good or service in exchange for this expenditure. Based on the Pentagon’s Defense Contract Audit Agency (DCAA) findings of $1.4 billion of overcharging and fraud, I suppose the primary service they provide could be considered to be repeatedly violating the American taxpayer.On the other hand, the $15 billion in subsidies contained in the Energy Policy Act of 2005, to the oil, gas, and coal industries, would be considered corporate welfare because no goods or services are directly returned to the government in exchange for these expenditures.

Ah, but I found this, in  Add It Up: The Average American Family Pays $6,000 a Year in Subsidies to Big Business (under the heading, $870 for Direct Subsidies and Grants to Companies):”The Cato Institute estimates that the U.S. federal government spends $100 billion a year on corporate welfare. That’s an average of $870 for each one of America’s 115 million families.”

Then, later, under the heading $870 for Corporate Tax Subsidies,  the same publication says: “the Tax Foundation has concluded that [corporation’s] ‘special tax provisions’ cost taxpayers over $100 billion per year, or $870 per family” (source: ). But the link for the Tax Foundation therein is broken.

Republicans in Congress want to cut food stamps but not corporate welfare (e.g., corporate farm subsidies).  That is pure evil.   If they  proposed cutting both, it might make some sense.

by Matthew Caruchet Karl Marx-inspired credit ratings agency Moody’s Investors Service issued a report this month saying that Amazon’s bullying tactics over Seattle’s newly-passed employee hours tax show it has too much influence over our city. The tax would require businesses with more than $20 million in annual revenue to pay about $275 per full-time […]

Quickie link: Tax evasion as a matter of principle

The Tax Evasion Double Standard: How US CEOs Are Withholding Revenue by Thom Hartmann If I refused to pay any taxes until the US government lowered my taxes to a so-called “fair rate,” I’d almost certainly be arrested for tax evasion. But when The Washington Post asked Apple CEO Tim Cook about the billions that […]