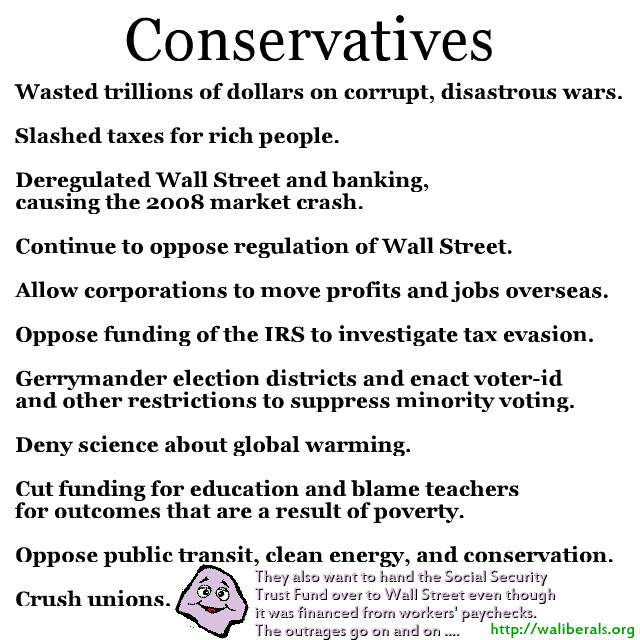 Oppose funding of the IRS to investigate tax evasion.

Gerrymander election districts and enact voter-id and other restrictions to suppress minority voting.

Cut funding for education and blame teachers for outcomes that are a result of poverty.

They also want to hand the Social Security Trust Fund over to Wall Street even though it was financed from workers’ paychecks.

The outrages go on and on ….

What happened to the GOP? Look at the 1956 GOP Platform

The 1956 Republican national platform was a progressive document. “We are proud of and shall continue our far-reaching and sound advances in matters of basic human needs—expansion of social security—broadened coverage in unemployment insurance —improved housing—and better health protection for all our people. We are determined that our government remain warmly responsive to the urgent […]

Is the Republican Party a cult?

http://www.bbc.co.uk/news/science-environment-14768574 The editor of a science journal has resigned after admitting that a recent paper casting doubt on man-made climate change should not have been published. The paper, by US scientists Roy Spencer and William Braswell, claimed that computer models of climate inflated projections of temperature increase. It was seized on by “sceptic” bloggers, but […]