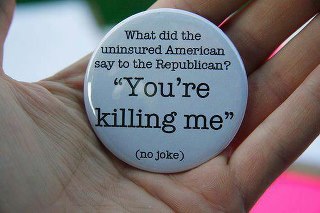 “The top five U.S. banks paid staff a combined $119 billion for 2010, according to bank consolidated income statements.”  from this Reuters article: Compensation seen rising among bankers: poll.  Add in Goldman Sachs and the compensation comes to about $140 billion. According to Dollars&Sense Wall Street financiers received $20.8 billion in bonuses last year on […]

Prisons and Profits? Can we have both?

It’s bitter sweet to be writing about prisons during the week that Gil Scott-Heron died. I believe that Gil did some time for possession of cocaine. That tells you so much about the current purpose of the incarceration industry. I guess there’s a good chance that with a record and prison time that Gil lost […]

At the moment, justice has not reached the Bush Administration officials on our shores. The Obama Administration protects and perpetuates the Bush crimes. The world knows, and we know, that there shall be no peace without justice. Bush & Associates Found Guilty of Torture www.mathaba.net A solid case for the prosecution of Bush, Blair, Rumsfeld, […]