My statement on the discussion of whether or not to vote for Clinton should Bernie not win the Democratic nomination and the many permutations of that discussion:

I support the values embodied in the Democratic Party’s Washington State Platform (and many other state and local platforms, and quite a bit of what winds up in the national platform, although small-d democracy in the party ends at the state lines.). I need to see more than a blue t-shirt with a “D” on it to support a candidate, I need to see CREDIBLE support (a track record, not just lip service) of those values from any candidate I work for or even vote for.

The primary problem with the party has been that we’ve not held our elected Dems accountable to those values and as a result working Americans have been sold out to the corporate tools of the wealthy power elite. (The GOP has always wanted to return us to the Gilded Age, they only started succeeding when many elected Dems stopped fighting back in the late 1970s.) An organized movement to change this started after the 2004 Democratic convention, Bernie’s candidacy sprang from it and has advanced it more than many thought possible.

This is a movement, and as such, it is more than one man. Bernie is incredibly principled and politically astute. But, as he repeatedly says, this is about US not him. In our system, political parties perform many valuable functions. That the Democratic Party has been slacking on upholding its values and performing interest aggregation among its members (among other things) and selling out working Americans is not an indictment of the party system, it is an indictment of the too many rank-and-file Democrats and others who share the values the party supposedly stands for thinking that someone else will do the work to make it accountable. As my friend Anita said in the thread this was written for— learn the rules and start playing. There are plenty of folks already inside the party who need your help and will hold the door open for you.

If Bernie is not on the general election ballot the pertinent question is not which sell out or no chance message candidate you will vote for, but what will you do to advance those values and ensure that 2016 is the last Presidential election where there is a Democratic candidate that does not support working class Americans. But not a single delegate has been committed at this point (super delegates are by definition uncommitted, so getting worked up over them is counter-productive), so at this point every ounce of effort should be going to ensure that Bernie wins the Democratic nomination. 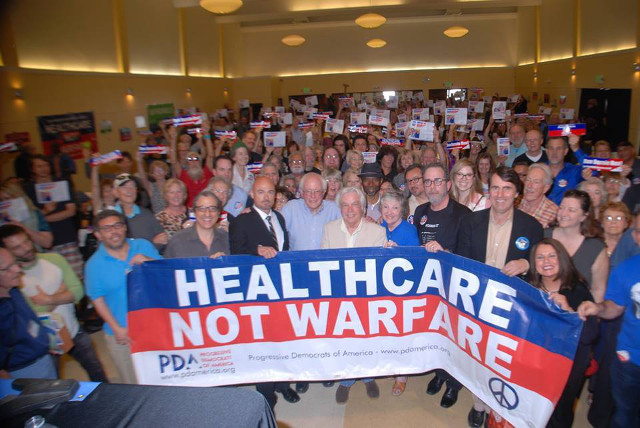 Government is Good: An Unapologetic Defense of a Vital Institution

The Government is Good website has announced that their book Government is Good: An Unapologetic Defense of a Vital Institution is now available in paperback form and as an ebook. Why a book defending government? Because for decades, right-wing forces in this country have engaged in a relentless and irresponsible campaign of vicious government bashing. […]

Come and hang out with Norman Goldman! Jan. 18 in Seattle.

Come and hang out with Norman Goldman! Jan. 18! Progressive Radio Northwest presents “PARTY ON FOR PROGRESSIVE RADIO” WITH NORMAN GOLDMAN · A Festive Reunion for AM1090 Listeners · A Rally to Celebrate the Future of Progressive Talk in the Pacific Northwest · A Shout Out to AM1090 Advertisers Featuring: National Progressive Talk Show Host, Norman […]

An Open Letter To Dr. Cornel West: Why Should The Occupy Movement Vote For Obama?

I had the great honor of meeting Dr. Cornel West when he visited the Occupy Seattle encampment at Seattle Central Community College in November 2011. I will never forget that historic beautiful day in the Emerald City… I was very impressed by Dr. West during our meeting. He is undeniably one of the most respected […]