Matt Ridley is Hereditary member of the House of Lords, and a Tory. “Viscount Ridley is a title in the Peerage of the United Kingdom. It was created in 1900 for the Conservative politician Sir Matthew White Ridley, 5th Baronet, Home Secretary from 1895 to 1900. ” (source)

Ridley is a climate change skeptic, has interests in coal mines, is a proponent of fracking, and is in favor of Brexit.

“Ridley was chairman of the UK bank Northern Rock from 2004 to 2007, during which period Northern Rock experienced the first run on a British bank in 150 years. Ridley chose to resign, and the bank was bailed out by the UK government leading to the nationalisation of Northern Rock.” (source) 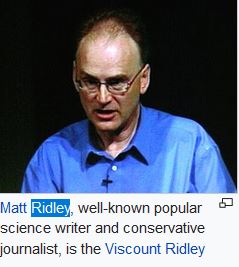 Ridley’s 2015 book Evolution of Everything: How New Ideas Emerge is a well-written libertarian manifesto that attacks religion, government, regulations, public education, and environmentalism. 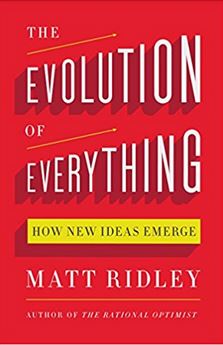 Ridley is clearly smart, and he’s a good writer. (Few U.S. politicians are as educated.) He’s written books on biology, and the first chapters of Evolution of Everything are a convincing account of how life evolved through random mutation and natural selection.

But the rest of the book devolves into an imbalanced libertarian (“bottom-up”) screed.

In a discussion of the Nature versus Nurture debate, Ridley defends Nature. He argues that, to a larger extent than people want to admit, it’s not society or even parents that determine the personality or success of children. Rather, it’s genetics.

He summarizes the intellectual history of such debates. Because genetic determinism could be used to justify racism and sexism, for many years research suggesting a strong role for Nature (versus Nurture) was strongly condemned by the social sciences. More recently, it’s been become acceptable to acknowledge that babies are not a blank slate and that there are innate sex differences.

Judith Rich Harris was one of the most successful proponents of the Nurture side of the debate. At first, opposition to her findings was “furious.” Ridley says “Natural selection made sure that brainwashing was not easy. And it’s time we stopped looking to parenting for the credit or the blame.”

Ridley is clever, but his cleverness approaches sophistry. He calls it a “meritocratic result” that children’s intelligence and success in life are mostly determined by their genes and not by society or their parents.

“[A] world where nurture was everything would be horribly more cruel than one where nature allowed people to escape their disadvantages through their own talents. How particularly nasty to write people off because they were born in a slum, or fostered
by indifferent parents… Nature is the friend of social mobility.

Believers in Nurture don’t want to “write off” people born in slums. They want to help them overcome their accidental disadvantages. A world where everything is determined by genes would be cruel, because people couldn’t escape their genetic natures.

Ridley criticizes and ridicules religions, and argues that they too evolve. Christianity and Islam evolved from pre-existing religions, though their followers would like to believe that they were revealed from on high (“sky hooks”).

Similarly, legal systems evolved bottom-up, he says. “It is an extraordinary fact, unremembered by most, that in the Anglosphere people live by laws that did not originate with governments at all.” Rather, most laws emerged from common law.

He argues that even in the absence of governments, people arrange for justice and policing bottom-up, via ostracism, gangs, and private police forces. In prisons, inmates self-govern. Such government is often brutal and injustice, but the same can be said for a lot of top-down government.

A late chapter tells stories of successful private banking systems with private currency; it portrays central banks as enablers of fraud and bad lending. According to libertarians such as Ron Paul, the Federal Reserve is a state-sanctioned monopoly. Far better to allow private money. “Bottom-up monetary systems — known as free banking — have a far better track record than top-down ones.”

He denies that the great recession of 2008 was caused by deregulation. Instead, he blames it on China (for devaluing its concurrency and causing a trade imbalance and housing bubble built on money from China), on the U.S. Federal Reserve (for its low-interest policies that inflated Wall Street prices), and on Fannie Mae and Freddie Mac (whose government-backed borrowing inflated housing prices and enriched private corporations). Lenders, brokers, and builders lobbied Congress, as did minority-rights organizations such as ACORN. “In short, the explosion in sub-prime lending was a thoroughly top-down, political project, mandated by Congress, implemented by government-sponsored enterprises, enforced by law, encouraged by the president and monitored by pressure groups.” “It is simply a myth that the problem came from deregulation.” “Fannie and Freddie were holding more than two-thirds of all sub-prime loans, or $2 trillion worht. Nearly three-quarters of new home loans passed through their hands that year.” Ridley quotes David Stockman, “The Fannie Mae saga demonstrates that once crony capitalism captures the arms of the state, its potential for cancerous group is truly perilous.”

And he doesn’t mention the need for government to bail out banks for trillions of dollars (including Ridley’s own bank!).

https://en.wikipedia.org/wiki/Government_policies_and_the_subprime_mortgage_crisis and https://en.wikipedia.org/wiki/Subprime_mortgage_crisis#Causes discuss  the various causes for the subprime mortgage crisis of 2008. It’s fair to say that both deregulation of the securities industry and government encouragement of lending through Fannie Mae and Freddie Mac contributed to the problem.  Ridley paints a one-sided picture.

He relates population control and family planning to eugenics and murder: sterilization, one-child policies, and forced abortions. He says the key to decreasing population is economic growth: richer people have fewer kids.

He compares governments to crime gangs and environmentalism to a religion: “Nor is skyhook thinking confined to ‘god’ religions. It animates all sorts of movements that faith at their heart, from Marxism to spiritualism, from astrology to environmentalism.”

He quotes French philosopher Paul Buckner: “The environment is the new seclar religion that is rising, in Europe especially, from the ruins of a disbelieving world.”
People used to blame weather on the gods. Ridley says “The huge appeal of the ‘extreme weather’ meme of recent years comes from the fact that it plays into this divine-retribution mentality.”

He also compares climate change and Marxism to religions. Similarly with organic farming (which had spiritualist origins), as well as opposition to GMO grains.

But environmentalism and the theory of climate change evolved bottom-up, from the findings and concerns of numerous scientists and activists. Skepticism of climate change is top-down, imposed by ideologues and industrialists with an axe to grind.

Ridley admits that there is some alarming scientific evidence for climate change, but he thinks that proponents have overstated the evidence. Actually, the evidence has gotten stronger in the past few years.

He quotes from Liberal Fascists. He quotes from the Cato Institute. He says both Communism and Fascism are similar manifestations of top-down love of government. According to Ridley, the market, not government, has historically led to most increases in living standards.

Most technology emerges bottom-up, he claims. He quotes some OECD research that suggests that publicly funded research has almost no positive effect on economic growth, while private funding does.

But most corporations are run in highly top-down manners and depend on government for many services and research.

None other than Bill Gates, Jr. thinks government is more efficient than private industry in research: In Bill Gates: The private sector is completely inept, Gates writes:

“Since World War II, U.S.-government R&D has defined the state of the art in almost every area… When I first got into this I thought, ‘How well does the Department of Energy spend its R&D budget?’ And I was worried: ‘Gosh, if I’m going to be saying it should double its budget, if it turns out it’s not very well spent, how am I going to feel about that? But as I’ve really dug into it, the DARPA money is very well spent, and the basic-science money is very well spent. The government has these ‘Centers of Excellence.’ They should have twice as many of those things, and those things should get about four times as much money as they do.”

In The Horrifying Hidden Story Behind Drug Company Profits and The Truth about the Drug Companies, a former Editor in Chief of the New England Journal of Medicine writes of the drug industry, “Instead of being an engine of innovation, it is a vast marketing machine. Instead of being a free market success story, it lives off government-funded research and monopoly rights.”

Ridley argues against the Great Man view of history, according to which history is largely driven by te actions of geniuses and heroes. Instead, Ridley believes, changes emerge bottom-up. Numerous discoveries and inventions were made by multiple people at abut the same time. Newton and Leibniz invented calculus at about the same time. Charles Darwin and Alfred Wallace came up with the theory of evolution at about the same time.

“Music, too, evolves. To a surprising extent, it changes under its own steam, with musicians carried along for the ride.”

“Simultaneous discovery and invention mean that both patents and Nobel prizes are fundamentally unfair things.” If so, then large profits are unfair too.

If Ridley is correct that many inventions are due to societal forces and shared knowledge, isn’t that a reason for high taxation and for “spreading the wealth” that emerges from technology?

Ridley is critical of abusive patent law. He acknowledges that corporations do abuse government power to enhance their wealth.

He says that private schools were thriving in the 1800s but were unfairly displaced by government schools.

He says governments do more harm than good. He ignores the great success of Scandinavian countries and Denmark, as well as the success stories like Singapore, where prosperity came top-down. And he ignores the historically large role of the U.S. government in many technologies and providing services that corporations and people depend on. (Not to mention the bailouts!)

The final chapter, Evolution of the Internet, celebrates the decentralized and often open-source nature of the Internet: Wikipedia, citizen bloggers, and photo-sharing democratized journalism.

Ridley speculates that the technology behind bitcoin “could radically decentralize society itself, getting rid of the need for banks, governments, even companies, and politicians…. Imagine in the future summoning a tax that not only has no driver, but that belongs to a computer network, not to a human being.” Decentralized institutions are immune to corruption — unless there is insufficient government to control monopoly and crime. “The big-government model that threatens to bankrupt and bully us is not just unafforable; it is also increasingly impractical.”

Ridley is a conservative intellectual, a rare species. He makes a good case for bottom-up libertarianism, but the book is imbalanced.  Progressives need to fight such libertarian thinking.  Government can be and often is a source of good. We need to fix government so that it serves the people, and not the rich.  Medicare for All. Social Security. Public Education. Progressive taxation. Regulation. Environmentalism. All these depend on top-down designs.   In fact, both good and bad ideas emerge both bottom-up and top-down.

What Is the Far Right’s Endgame? A Society That Suppresses the Majority Nancy MacLean, author of an intellectual biography of James McGill Buchanan, explains how this little-known libertarian’s work is influencing modern-day politics. Comments comments