About half the questions were similar: how to energize and reach out to the grassroots, especially minority communities. Consequently, many of the candidates’ responses were repetitive. It’s a shame that there weren’t more varied and challenging questions, about specific issues and candidates (like Rodney Tom and some questionable votes by other centrist Democrats).  See A hard question for state chair candidates.   I was told that the questions were shown to the speakers before the event (though Patti Dailey says in the facebook comments below that the candidates saw only rough questions.)

Jay Clough is an ex-marine who ran, unsuccessfully, for office in the 4th Congressional District, in south central Washington State, against Doc Hastings.  He supports gun rights, as would be expected for a candidate running in rural Washington. 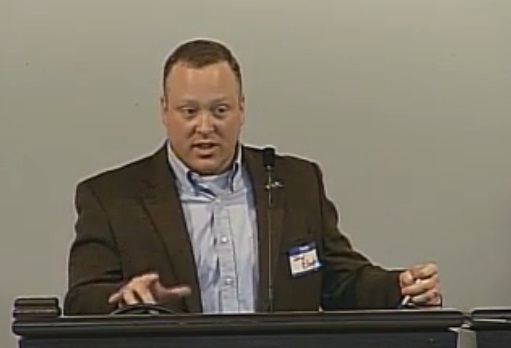 I, for sure, have zero interest in electing Democrats just because they’re Democrats. I’m in this entirely for the issues and because I think pushing the Democratic Party in the direction of my values is the best strategy at this point in time.  Yet it is a fact that almost all Democrats are better than Republicans, and there is value in supporting the party and giving some space for variety.

Clough [rhymes with bluff] set a concrete short-term goal for the state party: win the five LDs 35th, 41th, 45th, 48th, and 26th, and then build out from there.  Those LDs are winnable; many of the races were close in recent elections.

I was less happy about Clough saying that we have to build our party and get people to attend our meetings, even “drag them by the hair.”  Obviously, he wasn’t being literal, but it didn’t sound good.

Clough spoke of his multi-racial household: an African American step-father, a Japanese wife, and Hispanic relatives. And to the questioner from the Stonewall Dems, Clough mentioned his gay nephew.

Clough lamented the fact that Democrats have lost in some eastern districts with Latino majorities.

Dana Laurent has held leadership positions in Planned Parenthood, FUSE Washington, and the Win-Win Network, where she is now Executive Director. “Founded in 2007, the Win/Win Network is a forward-thinking 501(c)(3) collaboration formed to improve communication and coordination among nonprofit civic engagement organizations in Washington State. The network includes over 50 partners and two regional affiliates, Central WA Progress and Greater Spokane Progress” (source). There was robust cheering from the crowd (especially from the ladies) when Laurent first spoke.

Larent’s responses to questions were fact-filled. For example, she said 56% of non-whites (?) are registered to vote in Washington State, compared to 90%+ of whites. 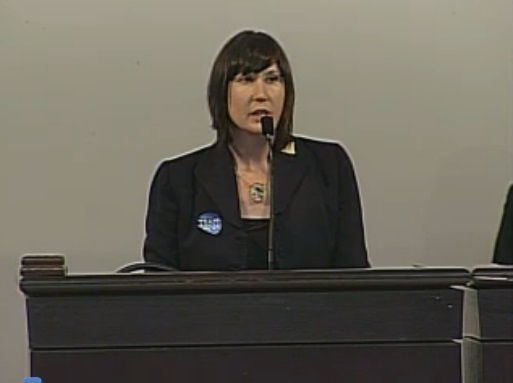 Ravens is the presumed front runner and the person most associated with outgoing chair Dwight Pelz.

Ravens had dozens of cheering volunteers holding signs outside the venue, and inside too Raven’s signs were plastered on the walls and on the backs of seats.

Ravens said the core of the party is building relationships. 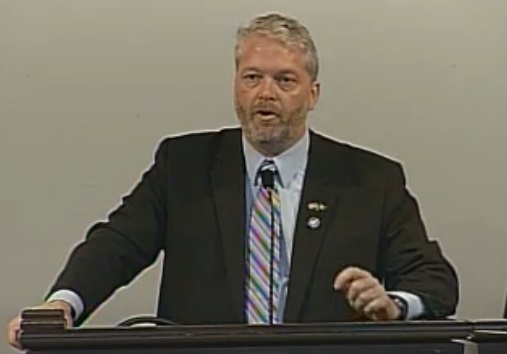 Jim Kainber was executive director of the Washington State Democratic Party from 1994 until 2003.  He managed operations for Hillary Clinton’s 2008 campaign in Washington State.

Kainber lamented the fact that in 22 legislative districts, Republican candidates ran opposed for the legislature. Such Republicans donated their funds to the Republican caucus, making it that much harder for Democrats to win seats in contested districts. The Democrats need to build the party in the east and rural parts of the state and field candidates. 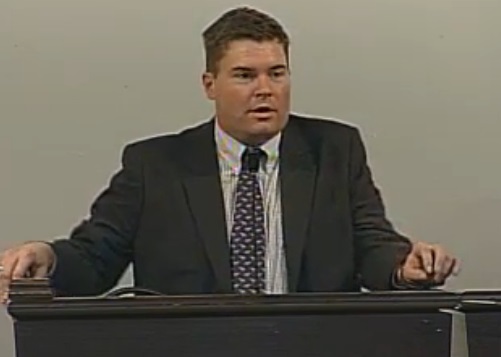 Kainber said that we need a robust Legislative Action Committee and that we should focus on a few issues every year.

Kainber said at one point that the purpose of the party is to elect Democrats; I think that’s wrong (Rodney Tom).

Only members of the state central committee have the right to vote for the state chair.

Here’s a video of the full forum, by TVW:  http://tvw.org/index.php?option=com_tvwplayer&eventID=2014010003 . Note: I obtained the candidate photos above from the TVW video.

Report of waste and waste at Hanford Nuclear site

The Hanford Challenger newsletter is reporting: As of this date, U.S. taxpayers have paid $40 billion for the cleanup at Hanford. Despite this staggering amount of money not one drop of radioactive high-level nuclear waste has been removed, treated or disposed of from the failing underground waste tanks , nor is there currently a credible […]

Well-made videos about our regressive, backwards tax system: Washingtonians Talk Awkwardly About Taxes Here’s the first of the videos from that page: Comments comments

One Reply to “Report on candidates forum for state chair”