Four recent articles have similar, frightening messages about the risk of nuclear escalation in Ukraine.  My member of Congress, Rep. Adam Smith (no relation), is playing a large role in sustaining that risk.

The first article, Putin flirts again with grim prospect of nuclear war – this time he might mean it, by Pjotr Sauer in the Guardian, says “Russian leader’s speech marks biggest escalation of Ukraine war, and raises fears of unprecedented disaster.”

The second article, in Responsible Statecraft, is Anatol Lieven’s Tick-tock: Putin escalation begins countdown of diplomacy clock .  “With news of possible annexation and potential use of nuclear weapons, Washington must put on the brakes and press for talks.”

The third article, by Noam Chomsky in Truthout, is The War in Ukraine Has Entered a New Phase.  It summarizes evidence that the West squashed a settlement that Ukrainian and Russian negotiators had tentatively agreed to in April 2022 and that the U.S. is intent on forcing a humiliating defeat for Russia. The article recalls that the New York Times has reported that “Mr. Putin has avoided escalating the war in ways that have, at times, baffled Western officials.” Chomsky warns that Putin has the ability to strike Ukraine and others countries much harder that it has so far, and the results could be catastrophic.

To put it simply, the U.S. position that the war must continue to severely weaken Russia, blocking negotiations, is based on a quite remarkable assumption: that facing defeat, Putin will pack his bags and slink away to a bitter fate.

Putin’s ill-conceived, illegal, and brutal invasion of Ukraine was triggered by a combination of frustrated Russian imperial ambitions and Washington’s arrogant expansion of NATO to Russia’s borders…..

Were this to become an extended war that more seriously bleeds Russian resources and power, or were Russian forces to face possible major military defeat, Putin could launch tactical nuclear weapons to terrorize Kyiv into suing for peace….

Congressional Democrats are all in for the war, with the vast majority even opposed to urging Biden to complement his billions of dollars of arms transfers to Ukraine with an appeal for a ceasefire and negotiations.

One of those Democrats is my House member, Rep. Adam Smith (WA-CD9, Chair of House Armed Services Committee).  Smith (no relation) has  strongly supported an aggressive response to the Russian invasion.  He has repeatedly called the invasion “unprovoked,” though that is glaringly not the case. He has called for arming Ukraine with long distance missiles. In HASC Chair Smith: Ukraine needs urgent help next 3-6 weeks, he said he supports “giving [Ukraine] the ATACMS and some of the longer-range missiles and the longer-range drones.”  He says similar things in U.S. Congressman Adam Smith Says Long-Range Weapons Key To Ukraine Victory.  Smith did not sign Rep. Jayapal’s recent letter calling for a negotiated solution to the war in Ukraine.

At a meeting on  September 21st of a local Democratic Party organization, the 41s Democrats, I asked Rep. Smith about the risk of a nuclear exchange. He replied that Putin is stupid but not suicidal. Smith said it’s a “dangerous situation to be sure, but step one in preventing a wider war is to stop Putin in Ukraine, and much progress has been made on that front. Step two is to find off-ramps and I’m working on that as well.” (He gave me permission to quote him.)

As Gerson wrote, up til now the Biden Administration and Congress have shown little interest in off-ramps. The stated belief of most members of Congress, including Rep. Smith, seems to be that it’s necessary to help Ukraine regain territory and put it in a strong bargaining position before pursuing negotiations.   Indeed, such thinking is reflected in Rep. Smith’s response when I asked him by email what he has in mind for off-ramps. Here’s his response:

We should never call for regime change in Russia. We should repeatedly make it clear we will never threaten the Russian state’s internationally recognized borders. [Do those borders include Crimea, which Russia has occupied since 2014?]  We should not declare Russia a terrorist state. And we should set our goal, not Ukraine’s and not implying we will force Ukraine into anything, but our goal as helping Ukraine recapture as much territory as possible back to Feb 23 borders. This is where I would start on finding those off ramps.

The desire to help Ukraine recover territory is understandable, but it fails to acknowledge U.S. culpability for provoking the crisis by aggressive NATO expansion — something acknowledged by many senior U.S. diplomats — an expansion which failed to respect Russia’s legitimate security interests and the need for a buffer zone along its border.

Would the U.S. allow Russia or China to set up client states along its borders with Canada or  Mexico?  Obviously not. The U.S. doesn’t even allow vaguely socialist countries to emerge in South America without sanctioning them and trying to launch a coup.

There is strong evidence that the U.S. provoked the war with the explicit intention of weakening Russia. Indeed, the 2019 RAND Corporation study Overextending and Unbalancing Russia “examines nonviolent, cost-imposing options that the United States and its allies could pursue across economic, political, and military areas to stress —- overextend and unbalance — Russia’s economy and armed forces and the regime’s political standing at home and abroad. ” It includes the paragraph

Providing lethal aid to Ukraine would exploit Russia’s greatest point of external vulnerability. But any increase in U.S. military arms and advice to Ukraine would need to be carefully calibrated to increase the costs to Russia of sustaining its existing commitment without provoking a much wider conflict in which Russia, by reason of proximity, would have significant advantages.

The highlighted words indicate that the authors were quite aware that U.S. provocations would cause Russia to respond militarily.

U.S. and NATO leaders have made recent statements, too,  indicating that their aim is to weaken Russia.  For example, Secretary of Defense Lloyd Austin told reporters  “we want to see Russia weakened to the degree that it can’t do the kinds of things that it has done in invading Ukraine.”

And just yesterday, the Pentagon responded to Putin’s threat of using nuclear weapons by saying that that the threat will not staunch U.S. aid to Ukraine.

It’s hard to avoid the conclusion that the intention all along was to set up a trap, to lure Putin into invading Ukraine. That was the expressed goal of the RAND Corporation report above. More evidence for the goal is in this Compendium of evidence about U.S. provocations in Ukraine.  Putin sure fell into the trap. He is the one who launched the invasion, so clearly he is guilty.  (Most of the antiwar left would agree with that statement.)  But as even Thomas Friedman says in the NY Times, the U.S. is not innocent in Ukraine. And failing to acknowledge U.S. culpability risks an extreme backlash from Putin that can include nuclear or chemical attacks.

Suppose a bully at school provokes a kid for years, by poking him, tripping him, ridiculing him, stealing his lunch, rallying buddies to join him in making the kid  suffer, etc.

Same thing with aggressive NATO expansion and the war in Ukraine: both sides are guilty.

The U.S. is not innocent in Ukraine.

I have presented Rep. Smith with quotations from and links to dozens of articles by diplomats, journalists, and academics, showing that aggressive NATO expansion was destabilizing and unnecessary. He has acknowledged that some diplomats and commentators thought that NATO expansion was too aggressive.  But he says he disagrees with them. Rather than provoking the invasion of Ukraine, NATO expansion was needed to prevent even more widespread Russian aggression, he says.   I tried to get him to admit that the U.S. aided the 2014 coup in Ukraine that overthrew the democratically elected pro-Russian government — as Christopher Caldwell says in his NY Time essay The War in Ukraine May Be Impossible to Stop. And the U.S. Deserves Much of the Blame — but Rep. Smith refuses to admit that that happened.

Smith has been hawkish, too, about funding the U.S. arms buildup near China and in supporting Nancy Pelosi’s visit to Taiwan; he said: “There is nothing combative about the Speaker going to visit Taiwan. Members of Congress go to Taiwan all the time, and have for decades. And I’m just worried about letting China decide what’s provocative.”.

So, we’re in a situation where, not six months after the end to the disastrous twenty year war in Afghanistan,  the United States is in a proxy war with Russia, having provoked it by aggressive NATO expansion, and is also provoking war with China.  This is expressed in this rather radical but too accurate meme image from Global Times. 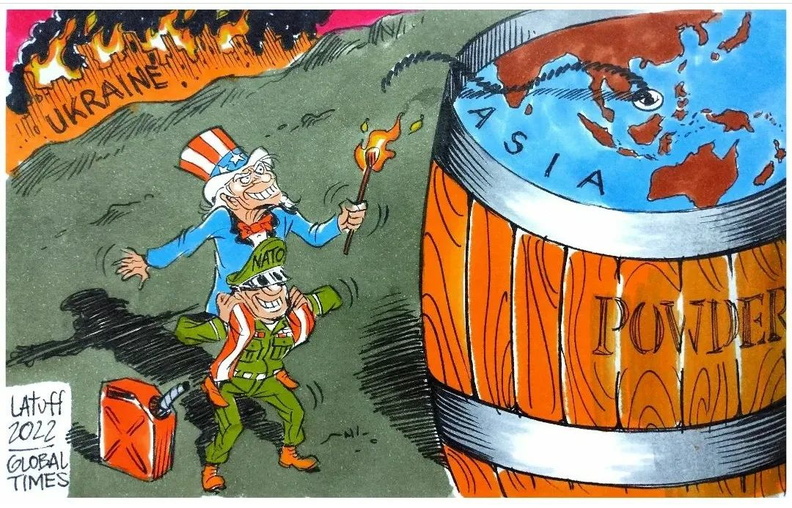 Rep. Smith is a Democrat whose congressional district includes South Seattle, as well as ethnically diverse suburbs to the south and east of Seattle.  On social and economic issues he’s been voting as a progressive.   He has been handily defeating socialist challengers.  On military issues he votes like a neocon.  His district includes Boeing aircraft plants, and he has been one of the largest benefactors of campaign contributions from military contractors.

Let us pressure our members of Congress to push for a negotiated end to the conflict in Ukraine, lest we all die in a nuclear holocaust. Let us pressure media organizations to present a more skeptical view of the war in Ukraine, its causes, its costs (including inflation), and its risks. And let us work together with like-minded politicians (including some Republicans), academics, journalists, faith leaders, and activists to expose the costs and dangers of America’s hyper-militarized foreign policy.

And if you are in the Seattle area, please attend the antiwar rally organized by World Beyond War in Seattle this Saturday, Sept 24, at Cal Anderson Park at noon.

Below are additional meme images illustrating Russian Roulette in Ukraine:

This is the risk:

Poll: What is the most likely scenario for the future of America?

Both are correct, Yo-Yo Me

Some progressives say we need to vote for President Obama despite his sell-outs, because the alternative is so much worse — especially given the fact that the president nominates Supreme Court justices.  Another factor is that if the voters think Obama is bad, then they’ll be less likely to vote for down-ticket Democratic candidates. So […]