Real Change, SHARE/WHEEL, and Nickelsville are calling upon the broader community to join us this April 24-25 in a 24-hour wake-up call to get real about ending homelessness AND meeting the short term needs of those who suffer on the streets.

While austerity budgets at all levels of governments have targeted programs that serve the poor, double digit unemployment and a predatory lending industry have created many new homeless, even as record numbers of foreclosed homes stand empty.

Occupy CEHKC is the launch of a long-term campaign to change how we approach homelessness in King County.  Homeless people call upon CEHKC to revise how they operate in these three areas:

1.) Data collection and outcomes should be used as a tool, not a weapon.

We are concerned that data collection is being used to control service providers and enforce unrealistic priorities and outcomes, and that those who do not cooperate are threatened with funding loss.

2.) Provision of low-cost survival services must be prioritized.
Shelter capacity should be pegged to demand and turn-aways should be tracked as a means of gauging need. Partnerships between tent cities and host communities should be nurtured to build the political will to end homelessness.

3.) CEHKC must create and promote an economic justice agenda.
CEHKC leadership needs to use their considerable influence to affect the issues that create homelessness, and not just mitigate the misery that comes from accepting injustice. These include inequality, affordable housing loss, scarcity of livable wage employment, and the criminalization of the poor.

JOIN OUR LISTENING CIRCLES
Saturday, April 21, 90 minute sessions at 10 am, noon, or 2 pm
Listening Circles at Real Change
Join the dialogue between homeless people and their allies for economic justice, and learn about our common interest in taking action.  Email organizer@realchangenews .org for more info and to RSVP

April 25, 7:30 am, Westlake Park
March to YWCA Opportunity Place, 3rd and Lenora to attend quarterly Governing Board Meeting of Committee to End Homelessness In King County 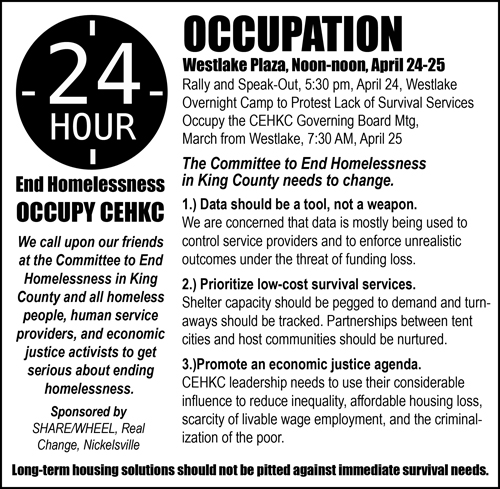 On January 25 and January 26, 2012 there were hearings in Olympia on SB 6310 and on HB 2434, the bills to establish the Washington Investment Trust (WIT), a publicly owned state bank. This report includes a refutation of the testimony of the State Treasurer, Jim McIntire, who is funded by the big banks and […]

One Reply to “Occupy CEHKC, April 24-25, to end homelessness”