I got permission to copy the post of a friend of  friend, below.   My apologies for the anonymity and “hearsay” nature of this evidence.  Someone at my work attended the counter-protest and says that the post below is accurate: the police were aiding the neo-Nazis.

“Report on Seattle events today. Multiple times fascists attacked a peaceful protest and were released by police each time. Cops arrested the peace keepers. The fascists were belligerent and picking fights in a totally peaceful crowd. Don’t believe the hype that antifa and the left are instigating violence. These guys were looking for a fight and we tried to not give it to them. (PS to join these so-called Proud Boys you are REQUIRED to attack people)

“Regarding the “anti-Sharia” action organized by a hate group and counter protest today [in Seattle] :

I was a part of the marshal team for the counter protest today and feel it is critical that I get my perspective out there on what happened. The marshal team was comprised of individuals from the Greater Seattle General Defense Committee as well as numerous folks from other organizations from the coalition that organized the action.

Our job was to facilitate the counter protest’s march to and from City Hall Plaza and help work to de-escalate situations and keep participants safe throughout the duration. We had two fantastic, designated police liaisons who before the march started, went to City Hall and spoke with multiple SPD commanders regarding our intentions to keep the rallies separated and safe. They were told by SPD that if the fascists wanted to march, they could, and that we would be expected to keep a block away from them which was in accordance with our own intentions anyways.

Unfortunately, the fascists were NOT held to the same standard by SPD.

While at City Hall Plaza, I personally escorted multiple groups of alt-righters, Proud Boys, and even Joey Gibson himself with his violent motorcycle club buddies through our crowd and helped them safely get to their rally without causing a scene on our end.

One particular group, mostly comprised of Proud Boys, crossed through our lines multiple times. I personally witnessed one of them unplug one of our speakers and violently push multiple people out of his way. During their last foray into our crowd, people moved to stop them from coming in and starting a fight and were immediately hit in the face by two of the Proud Boys. This all happened mere feet from at least 2 dozen SPD officers.

As a marshal, I immediately went to them, identified myself as one of the marshal team, and asked that they help get the assailants away from us. I was met with a response of “If you aren’t letting them march through your crowd, then we can’t stop them from hitting you.” The assailants were both pulled to safety by SPD and allowed to wander off. It’s safe to say that if any group of counter protestors would have tried to shoulder their way through the fascist rally, SPD would NEVER respond in such a manner.

In fact, just last week Portland Police Bureau and DHS officers cooperated with far-right militia members in arresting peaceful anti-fascists for merely being in the vicinity of their rally space. It is clear that they have no actual interest in free speech or peaceful engagement.

Around 12-12:30, we began assembling to escort our community members from MAPS and CAIR who were running an “Ask a Muslim” booth at the rally safely to our dispersal point at Occidental Square. As our march departed, the opposite direction from the hate rally, SPD allowed a group of around 20 of them (including the same Proud Boys, Joey Gibson of Patriot Prayer, and “Tiny”, a violent biker) to stalk our march a block away. This group then went to the Central Saloon and began drinking.

We arrived at Occidental Square and had a few more speakers before we began dispersing. While this was happening, a group of about 10 of the fascists attempted to come down and into the park. While this situation was arising, another group of them led by the same assaultive Proud Boys from before came from the other direction, walked by SPD officers, and went straight into the park and began attacking people. During this altercation, 3 members of the General Defense Committee were violently arrested while the SAME INDIVIDUALS WHO HAD ALREADY ASSAULTED PEOPLE EARLIER IN FRONT OF SPD WERE ALLOWED, AGAIN, TO GO FREE”.

Please, if you can, start contacting your city council members, mayor, and police chief demanding accountability for allowing these assaults to happen. Help get the story of what actually happened today out to all of the standard bullshit media outlets. We all need to be strong and support the folks who got hurt and arrested today while taking action against hate in our community by violent thugs from out of town” 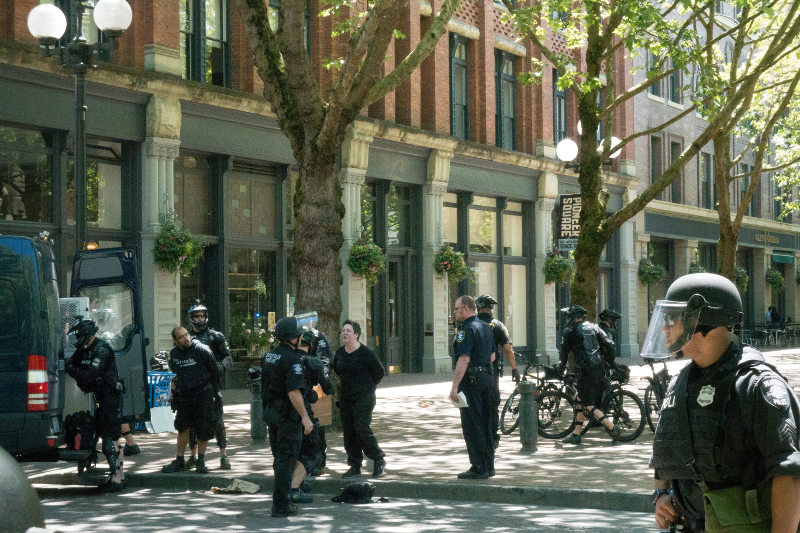 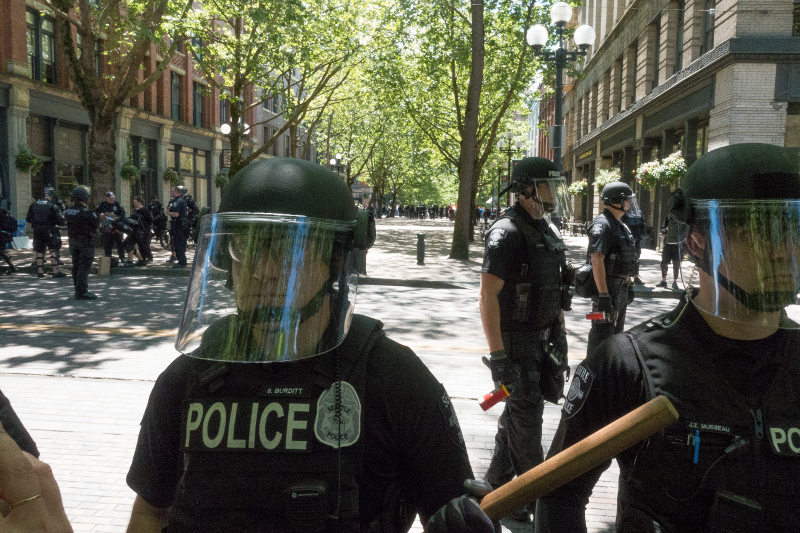 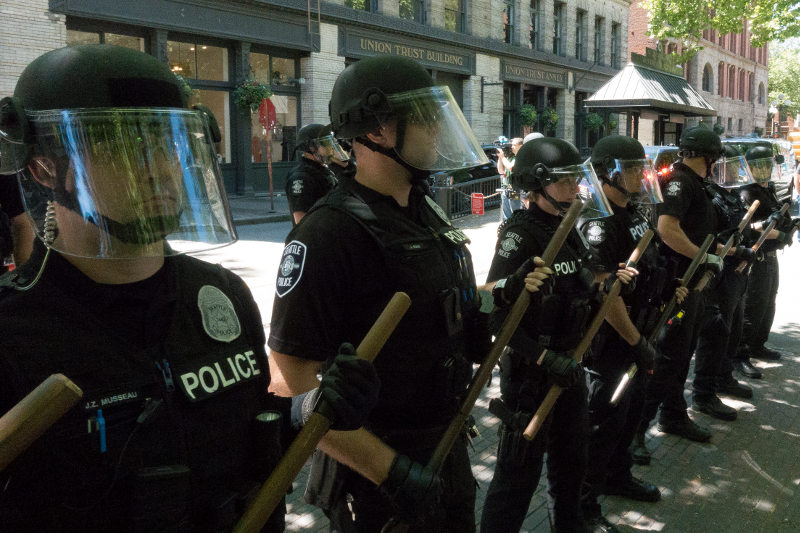 Another source, my coworker who said the facebook post was accurate, shared the above pictures from the rally and commented:

After the white supremacist rally dispersed, we marched back to Occidental Park, where we started the last part of our counter-protest, a set of speeches. Soon afterwards, I saw groups of white supremacists coming into Occidental Park, and starting to assault the counter-protestors. They had no business to be there because the counter-protest had obtained a city permit to rally in Occidental Park. The police had no business to let them come there, but they stood by and allowed the white supremacists to approach the park, and actually enter. These guys were definitely looking for trouble, and they knew exactly where to find it. I was busy with the speeches, so I missed the early part of the action, but as soon as the speeches ended, I headed out to where trouble had broken out, and took some pictures, which I’m sending you.

Descriptions for the 4 pictures:

1. Picture of two counter-protestors, who were part of the safety committee, being arrested by Seattle Police

2. On the left you can see the arrests in progress. On the right you can see that the two policemen have removed their pepper spray cans from their holsters, and are ready to use it on counter-protestors if “needed”

3. See how heavily armed the police were. They had 4 magazines each – over 50 rounds – on them, in addition to pepper spray, and they were probably carrying flash bangs in those pouches hanging from their uniforms

4. Seattle Police formed a roman-style phalanx, and literally pushed us back, away from the site where they were making arrests and using pepper spray. Can you believe this s happening in Seattle?

One hundred fifty one years ago today the pivotal battle of the Civil War was fought, as Union soldiers succeeded in holding off Confederate charges on Little Round Top at Gettysburg. If the 20th Maine Volunteer Infantry Regiment had been overrun by southern troops, the Confederacy may very likely have prevailed in the Civil War, […]

In an interview with Financial Times Vladimir Putin says liberalism has ‘become obsolete’. The Russian leader made the statement before he left for the G20 Summit in Osaka, Japan. He claimed that liberalism is in conflict with “the interests of the overwhelming majority of the population…” According to BBC News, Premier Putin also stated that multiculturalism is “no […]

Foreclose on bankers and the 1% wankers