There’s a movement underway to recruit Dennis Kucinich to run for Congress in Washington State.

On March 6, Kucinich lost a primary battle for his redistricted and gerrymandered Ohio congressional district.  (See here , here and here.)  His loss generated national coverage with commentators lamenting the “end of an era.”

Last summer and autumn Kucinich made numerous visits to Washington State, giving speeches (e.g., this) and appearing at fundraisers, largely to test the waters about a possible move to Washington State.  However, State Democratic Chair Dwight Pelz reportedly opposed the move, as did Kucinich’s likely Democratic opponents for Congress.  See the July article Dennis Kucinich looking for a political home, needs our help?

Now Washington Citizens for Kucinch, created by progressive activist David Spring and operating independently of Kucinich, is asking citizens to jump on board the Kucinich bandwangon and sign a petition calling for Kucinich to run here.

Believers in the cause of Peace are not sitting idly by and allowing war profiteers to use gerrymandering and black box voting to drive the leader of the U.S. Peace Movement out of Congress. Clearly, greedy Wall Street bankers and reckless multinational corporations stacked the deck against Dennis Kucinich in Ohio. They’ve long realized Dennis does not work for them. Thankfully, there are three Open Congressional Seats in the State of Washington – with no Democratic incumbents running in any of them.

There is also a facebook page for the effort. 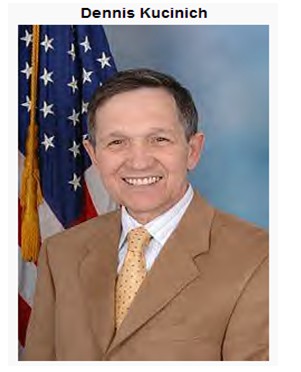 Spring says, “I and thousands of other Peace Activists will support Dennis’s campaign where ever he decides to run.”

Spring points out there are multiple Congressional districts in Washington State that do not have an incumbent Democrat running for re-election, including the 1st (incumbent Jay Inslee is running for governor), the 8th (where the incumbent is Republican Dave Reichert), and the 6th CD (where incumbent Norm Dicks is retiring).  The new 1st CD, which borders Seattle, might be the most convenient for Seattle-based activists, but the new district in Olympia (the 10th), for example, would have a more Democratic-leaning constituency: the new 1st CD extends all the way to the Canadian border.

Homegrown Democratic candidates for Congress would likely oppose a Kucinich run, but his presence would energize thousands of activists and bring lots of national attention to the race and to the state.

We are very pleased that Rep. Dennis Kucinich will be speaking at the Social Security forum at Highline Community College on April 12th from 6:30 – 8:30 p.m.

Entitled “The Threat to Social Security – An Issue for All Generations” the forum will be held in the Student Union Building (Building eight) on the Highline C.C. campus. Additional outstanding speakers include Pramila Jayapal, Executive Director, One America, Marilyn Watkins, Policy Director, Economic Opportunity Institute, and Magdaleno Rose-Avila, Executive Director, The Latino Equality Initiative and a member of PSARA’s Executive Board.

Kucinich has until May 18 to file to run for Congress in Washington State.

Throwing Metro Under the Bus

by Jennifer Langston King County’s transit agency needs a stable funding source. Really Metro service cuts hearing Here’s a picture of hundreds of people who crowded into a hearing room Tuesday to protest looming and massive bus cuts at King County Metro. If this looks familiar, it’s because we went through a similar exercise two years […]

How progressive is your state legislator?

Here are two online tools that help you evaluate the performance of your state legislators: Washington Conservation Voters legislative scorecard Washington Labor Council Legislative Voting Records. Each tool shows ratings for House and Senate members, with the Labor Council having a year-by-year analysis. Anyone know of other scorecards? [Yes, Brian Gunn pointed me to Legislative […]