The Official Local Voters’ Pamphlet for the primary election in King County includes statements for and against Proposition 1, which would impose a 0.1% increase in the sales tax in order to fund arts, science and cultural enrichment programs.

The statement against Proposition 1 states, “it is unwise and inequitable to impose another $500 million regressive sales tax increase on overburdened King County taxpayers.”

The interesting thing about this statement is that one of the co-authors is state Senator Dino Rossi (45th LD), a Republican who ran for governor.  Republicans are, with few exceptions, adamantly opposed to fixing our regressive tax system.  In the latest session of the legislature, they refused to agree to a capital gains tax and instead insisted on raising real estate taxes to fund education. Real estate taxes are more regressive than a capital gains tax, though not as regressive as a sales tax.

It’s disingenuous for politicians who oppose progressive taxation to use an argument about regressivity to attack a ballot initiative that increases the sales or real estate tax.

At least they acknowledge that the problem exists.

I note, by the way, that the legislature, including Republicans, voted, in 2015 to raise the regressive gas tax by 11.9 cents.   See http://www.thenewstribune.com/news/politics-government/article43025553.html  and Gas tax increases by 7 cents in Washington state. 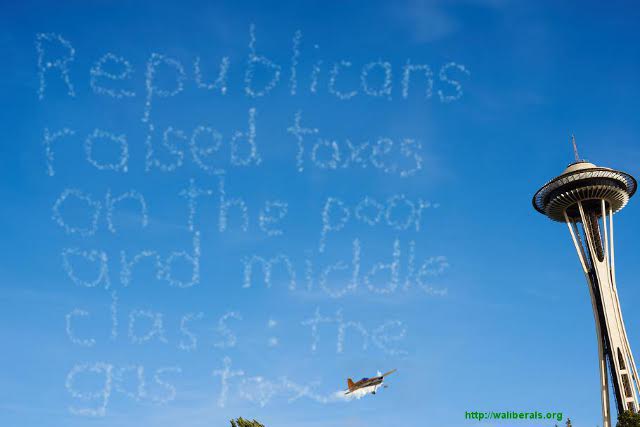 CarbonWA the heck is going on?

As you may have heard, the Alliance for Jobs and Clean Energy announced yesterday that they intend to file a ballot measure next year. (The single best article on the topic is Jim Brunner’s “Second group plans state initiative on climate change” in the Seattle Times.) Although this conflict has been simmering since our joint […]

GE paid less in taxes than they did for lobbying